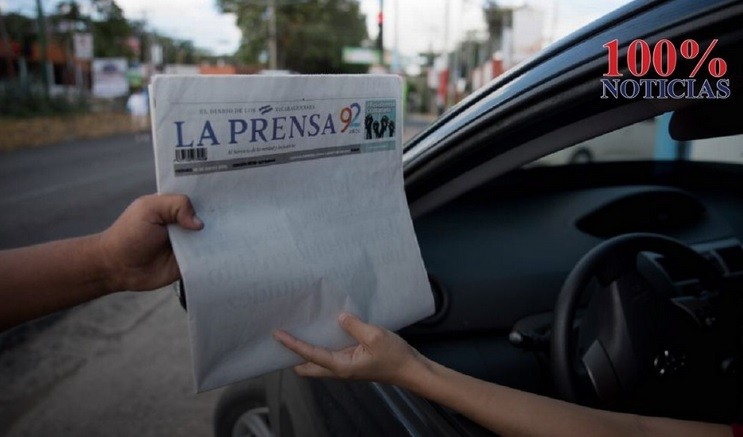 “Destroying La Prensa is an obsession of Daniel Ortega and Rosario Murillo,” says the editor of the last print newspaper that withstands as it can the pressure of the Sandinista regime.

HAVANA TIMES – “La Prensa is subjected to the whim of the dictatorship. They are determined to close it, to asphyxiate it. I don’t understand why,” said Cristiana Chamorro, director of the Violeta Barrios de Chamorro Foundation, and member of the family that owns the newspaper that will turn 94 this coming March.

It will reach it, of course, if it survives another month of besiegement that Daniel Ortega’s regime has imposed on it for a year and a half in order to close it.

Last week the newspaper rang the alarms again with an editorial entitled “The dictatorship strangles La Prensa!” It recognizes that the newspaper “could have its days numbered.”

“Even in failed states like Syria, Somalia and South Sudan there are printed newspapers. So that if La Prensa and the newspaper ‘Hoy’ (popular version of La Prensa) disappear due to the strangulation of the dictatorship, Nicaragua would hold the disgraceful record of being the only country in the whole world without a newspaper,” pointed out the statement.

Since September 2018, Nicaraguan Customs has retained in its warehouses a shipment of 92 tons of paper, ink and other necessary supplies to produce the newspaper. The cost of the supplies retained by Customs is around 180 thousand dollars, according to the newspaper estimates.

Eduardo Enriquez, editor-in-chief of La Prensa, says that when they have asked for an explanation for the retention, Customs only tells them that “they are orders from above.”

“Without a doubt, in this case, the implementer is the Director of Customs, Eddy Medrano, who is operating under the orders of Rosario Murillo and Daniel Ortega. They have the direct responsibility of restricting freedom of expression,” Enriquez states.

Cristiana Chamorro says that in the management meetings, when assessing the available reserves and the possible days to operate with them, she feels “as if a firing squad is getting closer under the command of Ortega and Murillo to take the final shot.”

Exhausted the paper stock of the newspaper, the daily paper has made use of all kinds of paper to keep its printed edition on the street. It has also adopted drastic rationing measures.

“The newspaper,” points out Enriquez, “has had to take steps to save what it has in inventory and last as long as possible, not to kill the paper edition while it can. We are currently with editions of eight pages and circulating in a limited way. We are a newspaper of national circulation but currently reduced to four of the 16 departments of the country to prolong the ability of La Prensa to print the newspaper.”

The strangulation of La Prensa falls within a generalized offensive against independent media, according to Cristiana Chamorro. “First they began with closing ‘100% Noticias’ (a tv station) abruptly, and did the same with Confidencial and ‘Esta Semana’ (This Week), then they managed to close ‘El Nuevo Diario’. My impression is that La Prensa has been left for last, so that when the scandals end give it a peaceful death, as if she died by herself.”

La Prensa was founded in March 1926 and has been by far the longest-running newspaper in Nicaragua. It confronted from its pages the Somoza dictatorship (1936-1979), period in which it suffered close downs, frequent imprisonment of its directors, aerial bombing of its facilities and the murder of its director, Pedro Joaquin Chamorro, on January 10, 1978.

Although at the beginning it sympathized with the revolution that overthrew Somoza, within a few months the fundamental contradictions with the Sandinista project began. Again, it suffered close downs, harassment, even some of its directors got involved with the armed counterrevolution and, finally, the president of its board of directors, Dona Violeta Barrios de Chamorro, as the opposition candidate defeated Daniel Ortega in the presidential elections of February 1990.

“We have passed so many vicissitudes throughout history,” says Cristiana Chamorro, daughter of the murdered director, Pedro Joaquin Chamorro and Violeta Barrios, who would become president of the country. “La Prensa is the collective conscience of Nicaragua. It is the story of thousands and, even, their story (Murillo and Ortega).”

In the 1970s, Rosario Murillo was the secretary of the La Prensa director, Pedro Joaquin Chamorro. “Rosario worked with my dad and was given the respect, solidarity, dignity and a space was opened for her to create ‘Gradas’ (a protest artistic movement). Likewise, Ortega was defended when he was a political prisoner of the Somoza regime. We do not understand why that hate, that revenge. It is not against the Chamorro family newspaper; in my opinion it is against that collective conscience that is behind La Prensa. As Pablo Antonio Cuadra said, La Prensa is the public language, it is the platform, the space to receive people who are protesting.”

“Silencing a newspaper is like forcing people to shut up,” adds Chamorro. “Of course, these are other times. Since the crisis and the repression that they began, the response that journalism has given has been up to par. Journalists do more cooperation and mutual support, with a vision of teamwork when doing coverage. Twenty-one information platforms have emerged in digital version, five journalists were awarded and a new organization of journalists was created.”

“This is a low blow to journalism,” says Ricardo Trotti, executive director of the Inter-American Press Association (IAPA) and assures that this organization follows attentively the harassment suffered by the Nicaraguan newspaper. “We have written letters to the government, always ignored, we have taken steps before the Inter-American Commission on Human Rights (IACHR) and human rights at the UN,” he explains.

Blocking raw material is a similar formula to that used by other dictatorships to avoid falling into direct closure of a media outlet, he says. In Venezuela, remember, the strategy was to prevent independent media from direct access to money they needed to remain in existence.

“We think that La Prensa will survive by doing good journalism on whatever platform,” Trotti believes.

Eduardo Enriquez says that all the necessary legal steps to have access to the supplies with which the newspaper is produced have been done. “First, there was the normal customs procedure and it was denied. Since constitutionally the import of raw material to communication media in Nicaragua is tax exempt, steps were taken and the exoneration was requested. They denied that too. They even got to the point of saying that if the tax was paid, which in itself is a violation of the law, they would deliver the raw material. Taxes were paid and they still did not allow it to enter.”

“We appealed to the Customs and Administrative Tax Court, which ruled twice in favor of La Prensa, and then, in an unusual move, dismissed and corrected, in quotes, its ruling. This time it ruled in favor of the Customs without giving any technical argument. Only that Customs was right with the retention,” explains the editor.

Enriquez says that La Prensa is working to survive digitally. “We have a strong digital version, but the point is that there is a decision by the dictatorship to restrict freedom of expression, prevent free access of information to Nicaraguans and damage and economically asphyxiate a company that with 94 years of history has faced all the dictatorships.”

Eduardo Enriquez said destroying La Prensa is an obsession of Daniel Ortega and Rosario Murillo. “Daniel Ortega came to power in the 80s, closed this media outlet for a year and a half, and returned to power with that old obsession to eliminate La Prensa.”