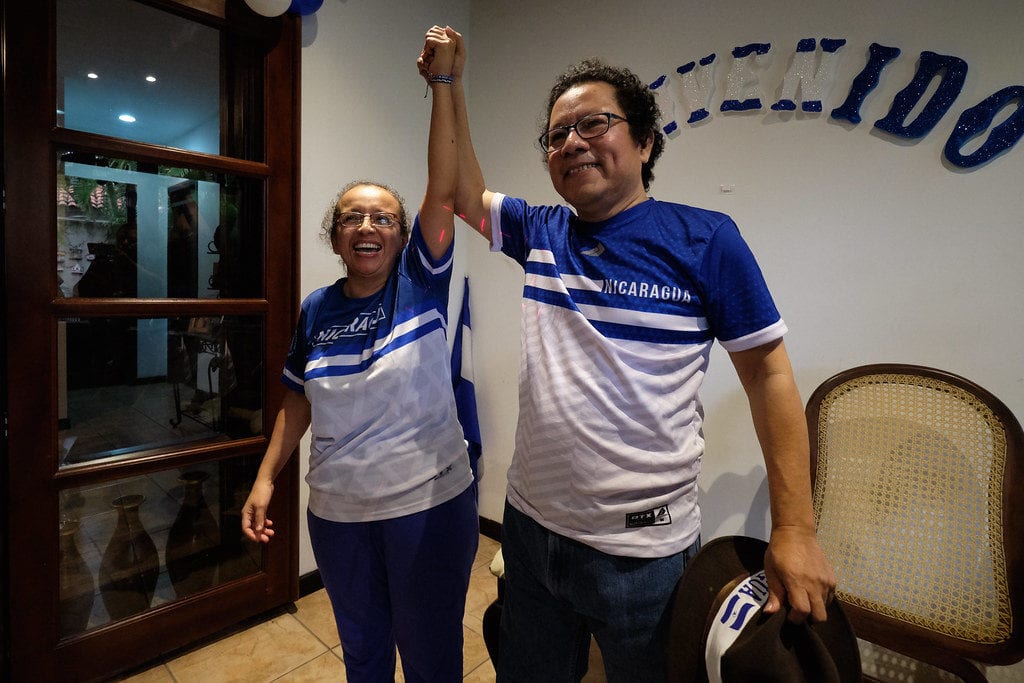 “We’re Going for a Change, and for Free Early Elections”

“If Ortega doesn’t return the television station, he’s a thief.” “The Ortega wing of the Sandinistas hates liberty, democracy and freedom of the press,” accuses Miguel Mora.

HAVANA TIMES – If it weren’t for the weight they’ve both lost it would be difficult to believe that Miguel Mora and Lucia Pineda Ubau have spent 172 days of solitary confinement in the maximum security cells of the Ortega-Murillo regime.

Mora, head of the currently-shuttered 100% Noticias television news station, and Pineda Ubau, the station’s news director, are jubilant at their liberation: they roar with laughter, they embrace, they cry, they joke.. “Following this commercial break, we’re now back with you,” Lucia says, as perky as ever.

The journalists are physically marked, but their spirits remain intact.

Miguel tells his little boy, Miguelito, that he’s now returned home, that he was working, and that Daddy won’t go away again. Veronica Chavez, Mora’s wife, jumps and yells with joy, hugging Lucia and the other freed prisoners who have invaded the living room. Upon seeing her husband amid the mass of arms, she jumps still more and leaps towards him. Miguel does the same. After everything that’s happened, they feel that their “Jehovah’s army” has heard their prayers.  Freedom.

Lucia is also euphoric. She leaps, screams and embraces those around her. The news director of 100% Noticias sets down a pillow and small bag she was holding – the few belongings that were left to her in jail. Several weeks before, she had already asked her mother to take her things home since the journalist was sure she was going to be released from the La Esperanza prison before June 18, the deadline for freeing the 760 political prisoners.

Her actual release came in an unexpected way: via the Amnesty Law passed by the Ortega-Murillo regime, a bill that gives them conditional freedom.

“They still want to incriminate us: if we continue informing, they’re going to put us back in jail. But we’re going to keep reporting!” Miguel challenges, as if he were already on the set of his program “The Fourth Estate”, a program of opinion in which he poured out the criticisms that disgusted the reigning power which, before the April massacre, had considered the Sandinista journalist to be an ally.

Miguel rejects the Ortega brand of Sandinista power. “The Ortega Sandinistas hate liberty, democracy and freedom of the press. In the mind of the Ortega supporters, there can be no other way of thinking. They got lost in their absolute corruption,” asserts the director of 100% Noticias, a television station that was closed down by police and paramilitary on the night of December 21,, 2018. “We’re going for a change in Nicaragua, for free early elections. Let the people decide. It’s that simple, let the one who gets the most votes, win.”

Their strength came from faith

Miguel and Lucia were almost always kept isolated in the infamous El Chipote interrogation jail and then the La Modelo and La Esperanza prisons.

Lucia had to defecate into her own hand for two weeks because the toilet in her cell didn’t work. This caused her a urinary tract infection.  They wouldn’t allow her even a Bible, or for food to be brought in. She complains that her isolation was even more complete than Miguel’s. “I didn’t even have neighbors,” she asserts on the internet television program Esta Noche. “Their goal was to damage me psychologically.”

When they transferred her to the La Esperanza prison, they also isolated her and harassed her by frequently filming her on cell phones. On one occasion, she was interrogated for nearly a full day and they took away her glasses. Later they wanted to have her make a video asking for Ortega’s pardon “for calling him a dictator” on television. She refused.

Miguel describes the maximum security cells as “tombs where they put living beings”. “I’d never been a prisoner, not for a minute in my life. And to go from freedom to being in maximum security is hard,” the director of 100% Noticia admits.

How is it possible that they couldn’t break these two journalists in prison? How do they explain that after 172 days of confinement they exhibit an unbendable spirit on this morning of liberation?

Miguel and Lucia agreed on the one reason: the intensity of their Christian faith. Station director Mora told us, “I kneeled before God” in the cell, and asked for strength. News director Lucia Pineda prayed every day. She was also comforted by the things her family members told her during the sporadic short visits to jail that they were allowed: that her journalist colleagues across “this whole little ball of a planet”, especially in Costa Rica, continued demanding her freedom, as well as the suspension of the spurious trial that had become an aberration all over the American continent for criminalizing the exercise of journalism.

“If Ortega doesn’t give back our TV station, he’s a thief”

Miguel Mora demands his television station back. The station director has taken advantage of his freedom to demand that Comandante Ortega return to him the television installations that up until today remain occupied by the police.

“We ask that they give us our channel back. If Ortega doesn’t return it, he’s a thief. You can’t steal a private business. Confiscation isn’t allowed in this country,” Mora insists. “If he has a minimum of decency he should return everything, up to the last paperclip. Now, today, because it’s already late.”

Aware that his demand might be rejected by the regime, Miguel vows that in that case he’ll “start another station” with support from the citizenry and the international community. The journalist and political prisoner says that he won’t be silenced. “It’s a right that we’re not willing to hand over,” Lucia argues. She also asks that their constitutional right to inform be respected.

Although 100% Noticias has not yet resumed operations, with the voices of both journalists once again being heard in the media, it seems like “breaking news at any hour” is back, interrupting “the commercial pause” that Lucia mentions, in reference to the censorship imposed by 172 days in jail and the isolation forced on them by the Ortega-Murillo regime.