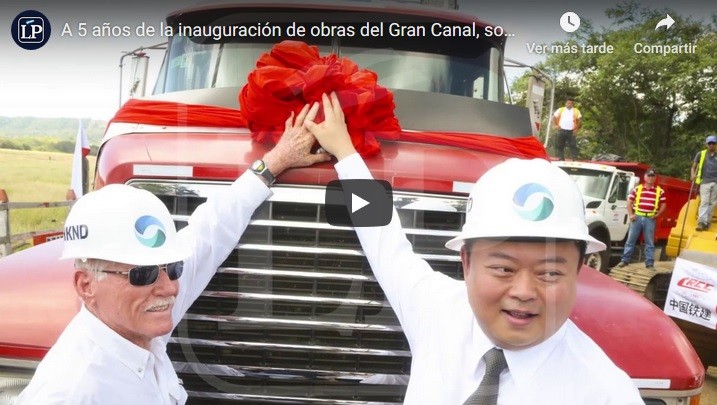 HAVANA TIMES – The first ships should be nearly ready to follow the Brito River upstream, but in fact the only one crossing the estuary is Alfonso Cruz, pedaling his bicycle along the shallows. He does this every day to come and go from the farm where he works as an overseer.

There’s no sign of Chinese workers in this zone, nor of any structure related to the great inter-oceanic canal, whose first shovels were celebrated here five years ago.  According to Wang Jing and Daniel Ortega at that time, on December 22, 2019, they’d be inaugurating the Great Nicaraguan Canal.

When the Canal is mentioned, Alfonso Cruz laughs and says jokingly, “That was a Chinese fairy tale and it doesn’t matter if it was a good thing or not, because in the end it wasn’t going to get done.”

He was aware of this project – whose scope was worthy of the pharaohs – but he never believed that it would be developed. He prefers to chat or be asked about his work on the farm located on the banks of the Brito River, a scarce few kilometers from the place where on December 22, 2014, the president of the HKND Group, Wang Jing, came down in a helicopter to inaugurate the Canal construction, which never progressed.

This same spot, which belongs to the Miramar farm, was the chosen scene for photos and videos to be disseminated later by the government media outlets, amid predictions that the canal would change the country forever.

Today, there’s nothing but brush that the horses are eating. There’s no trace of the Chinese, nor of the engineers who were to build a deep-water port in Brito for the ships to navigate through. Along the dirt road, there’s no heavy machinery that could be used for such an objective.

Although it’s a failed megaproject, Nicaragua President Daniel Ortega still insists that it’s pending. Last August he stated: “It’s not foolishness to think about a Canal in Nicaragua … it’s something I wanted to recall…. since we haven’t spoken about the Canal for a long time [I wanted] to recall that it’s a commitment of ours to continue working for the construction of a Canal for Nicaragua.”

But these are only words. Six years ago, the National Assembly deputies allied with Ortega passed Law 840, the law for canal construction, and five years ago the project was officially begun. Today, however, the work is non-existent.

According to the official information from HKND and the Great Canal commission, the length of the canal was calculated in 278 kilometers. It was to begin in Punta Gorda on Nicaragua’s South Atlantic coast, then pass through the department of Nueva Guinea, the town of El Tule, arrive at the shore of the Lake of Nicaragua (Cocibolca), cross the huge fresh water lake, follow the Las Lajas River (which crosses the Pan American Highway in the south), and later enter the Pacific Ocean via the port planned for the Brito River.

Along this route, the only visible remains are the stone boundary markers that the Chinese crew set up. It’s the souvenir that Wang Jing left us. The Chinese magnate himself has disappeared from public life and never managed to obtain the 50 billion dollars that the megaproject required.

In Brito, in the Santa Adela farm to be exact, there’s a marker with the year it was set up: 2013.  It also has some Chinese characters engraved on it. A few meters beyond, you can see a house built of weathered wood, from which Jose Antonio Castro, the farm’s manager, emerges.

This man with sun-roughened skin tells us that he’s been working there for two years; he wasn’t here when they came to put up the marker, but he was here to see the departure of the Chinese.

It was last year, when Nicaragua’s sociopolitical crisis had already erupted, that the trucks came to take away the two containers they had. “But they never brought bulldozers,” Castro notes.

Downriver, in a zone that’s favorable for fishing, Juan Carlos Ruiz comes three times a week to net sea bass, Pargo fish and shrimp. There are no Canal structures here either.

The still waters and the thick jungle that extend all around it are adorned with herons soaking up the sun, without the honking of ship’s horns or the locks that should have been finished.

“When they began to talk about a Canal, we wondered: “Where are we going to fish?” But since no work has been done here, there’s nothing to worry about,” Ruiz declared while throwing his net out once again.

Over the Deadline for financing

Another shovelful of dirt over the project comes from the legal perspective.  On July 13, 2019, the six-year deadline passed for the Hong Kong based company HKND Group to demonstrate concrete proof of financing for the Great Canal.

Since the deadline went by without any conclusive evidence, a provision in the law calls for it to be repealed, with no liability on the part of the Nicaraguan state.

However, there’s been a deathly silence with respect to the cancellation of the franchise established in the law.  No public functionary has issued a statement clarifying whether the State intends to abandon the project or to continue trying to sell the idea of a Canal that never began.

Meanwhile, Alfonso Cruz will continue crossing the Brito River to the farm where he works and Juan Carlos Ruiz will go on with his task of fishing.

The only construction project in the zone is for a highway

On December 22, 2014, Chinese magnate Wang Jing declared the construction projects for the Inter-Oceanic Canal underway.  However, there’s no infrastructure along any part of the 278 kilometers that made up the route.

Near the Brito River, the only thing there is are some topographic structures along a winding road on the other side. This work is being carried out by a private company, for the Coastal Highway that the Ministry of Transportation and Infrastructure hopes to construct in the medium term.

The enormous project of the inter-oceanic canal wasn’t the only mega-project in the fantastic plans of Wang Jing. It was to be accompanied by a number of related projects:

3 thoughts on “Nicaragua’s Canal Megaproject: A Blueprint is All That’s Left”