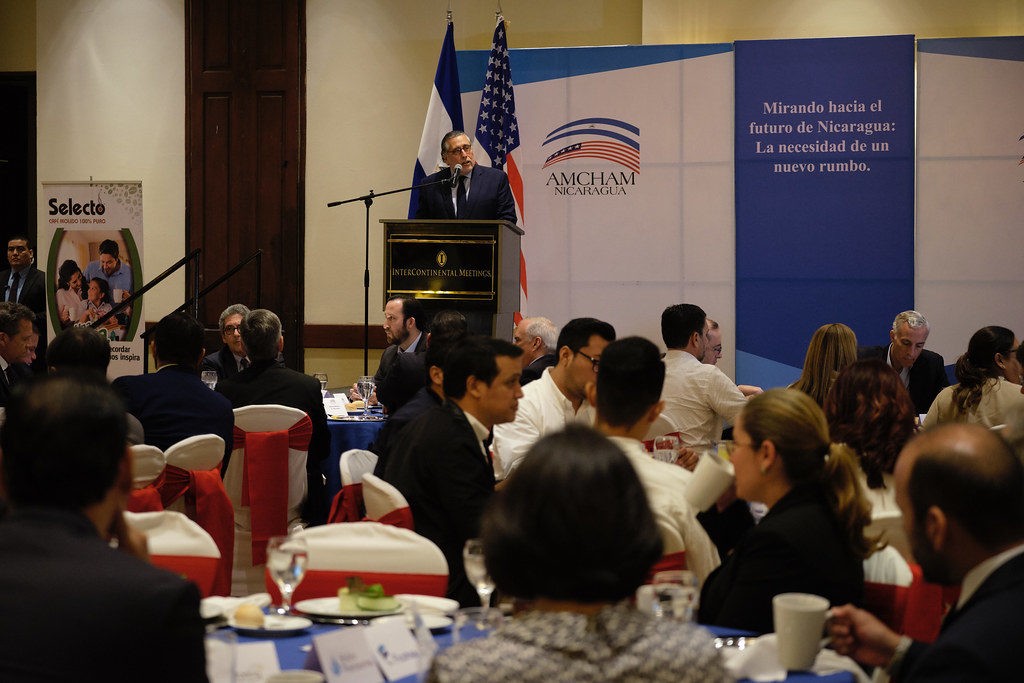 President of the American Chamber of Commerce (AmCham) in Nicaragua alludes to declarations from members of the Trump administration. “It’s what they’ve told us. [They can] go forward with severe sanctions against the country.”

HAVANA TIMES – Mario Arana, president of the American Chamber of Commerce in Nicaragua (AmCham), warned that the Free Trade Agreement between Central America, the United States and the Dominican Republic (known as Cafta-DR) is “at risk”, due to the lack of political will on the part of President Daniel Ortega to seek a way out of Nicaragua’s social, political and economic crisis. “It’s what they’ve told us. (They can) proceed with severe sanctions against the country. This concerns us, because it would affect all of society,” he said.

Arana noted that he recently spoke with functionaries from various organizations and institutions in the United States, and these confirmed that the possible cancellation of Cafta-DR for Nicaragua is a topic they’ve been discussing in the Trump Administration. The AmCham president explained that to officially expel a country from this treaty, in theory a negotiation must be opened with the other countries, in order to arrive at an agreement. However, the panorama changed following approval of the Nica Act in the US Congress in December 2018.

“So, I asked: ‘Could you [the US] sanction us by removing us from the Cafta-DR treaty?’ They responded, ‘Remember the law [the Nica Act] that was passed in the United States’ states that Nicaragua represents a problem of national security for the United States. So what they told me is that since it’s considered a problem of national security, ‘we [the Trump Administration] could emit an executive order and make the decision that way.’ So, I’d take it seriously,” Arana stated.

The treaty known as Cafta-DR was signed in 2005, during the government of President Enrique Bolanos. The United States is Nicaragua’s principal trading partner, and the data reflects that around 40% of local export products are destined for that market.

During a conference offered by AmCham this past Thursday, former Nicaraguan ambassador to the United States and current professor at the Incae business school, Arturo Cruz, stated that the opposition should be careful not to ask for sanctions that would harm the country’s vital interests, since such interests are important to the Nicaraguan people and not to the Ortega Murillo regime.

“Imagine that we lost Cafta. There are 125,000 jobs involved, representing over a half million Nicaraguans that live from these jobs. When unemployment is as great as it is now, each one of those jobs through Cafta is supporting two families. I’d speculate that those 125,000 jobs could mean food on the table for some 800,000 Nicaraguans,” he declared.

Cruz feels that a suspension of Cafta-DR for Nicaragua could take place, mainly due to the way that the government has behaved during the political crisis. However, he emphasized that Nicaraguans shouldn’t fall into the temptation of believing that taking this treaty away from Nicaragua would mean the end of Ortega.

“Totally the contrary. It would mean that the democratic governments of the future would be left without the motors for growth, and that we’d be throwing people into greater unemployment. The big winners if they expel us from Cafta would be Guatemala, El Salvador and Honduras,” Cruz continued.

On Wednesday, October 16, strongman Daniel Ortega made reference for the first time to the possibility of sanctions from the European Union against functionaries of his government, who have been accused of human rights violations and of breaking with the democratic order. He attacked the decision of the 28 European ministers, alleging that they form part of the “interventionist and imperial” policies of the United States against his regime.

“I don’t see how we could promote a dialogue with the European Union, if they’re talking about sanctions,” Ortega complained.

In the presence of the new EU mission chief in Nicaragua, Pelayo Castro Zuzuarregui, Ortega stated that “the European Union is adding itself to the North American policies,” a reference to the sanctions of the United States and Canada, that have already impacted around ten of his regime’s functionaries, including his wife and vice president, Rosario Murillo, and his son, Laureano Ortega Murillo.

“The groveling European Union makes itself ridiculous… by supporting someone as the chief of foreign policy like Mr. [Josep] Borrell,” stated Ortega, who classified the head of European diplomacy as “a radical”. Last week, Borrell asserted to the European Parliament that the situation in Nicaragua was worse than Venezuela.

Regarding Ortega’s speech, Arturo Cruz, former Nicaraguan ambassador to the United States, declared that he didn’t understand this type of commentary. According to Cruz, if there really were a sense of love for the country, then the [government’s] behavior should be very sensitive, so that this doesn’t end in a blow to the nation.

“I’ve said that in foreign policy, if you have to eat toads, those that love their country will eat the toads. Pride is a matter for personal egos. Countries like ours should have a lot of sensitivity: there can’t be any diplomacy among historic egos, because those who pay the price of that diplomacy are the people at the bottom. If you really love your country, as [Ortega] says he loves it, he should have more awareness of what he’s saying, and the consequences that his actions have, and what it could mean to those of the lowest incomes,” Cruz added.

Cruz feels that Nicaraguan society has an obligation to preserve the country’s economic achievements, but that “With this conduct, Daniel Ortega is putting at risk those achievements of the country and that concerns me greatly. A diplomacy without caution, in a country as fragile as Nicaragua – that’s not patriotic,” he added.