“So you will stop being a nuisance” 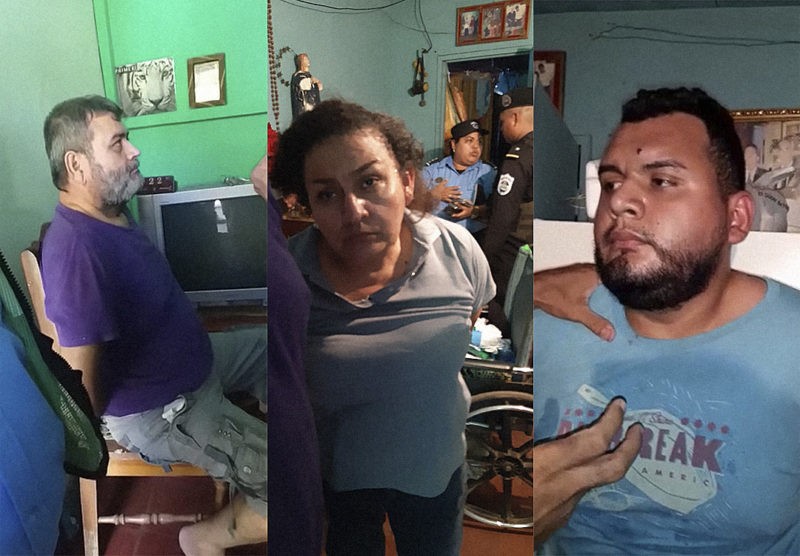 Police Chief Fidel Dominguez and his agents raided the house without a warrant, assaulted the residents and recorded them “apologizing” to the Ortega Government

HAVANA TIMES – Three members of a family of well-known opponents of Daniel Ortega’s regime, in Leon, were tortured by Leon Police Chief Fidel Dominguez, who—in an effort to humiliate them—recorded them in a series of videos in which they pledge “to stop being a nuisance” to the Police and the Sandinista Front militants.

In the videos Diego Reyes, his wife Maria Eugenia Alonso and their son Diego Reyes Alonso appear in handcuffs. After being physically assaulted they were forced to repeat the words of the police chief.  I pledge “not to fuck with militants (of the Sandinista Front), or the people. Non-repetition. Peace is not played with. I am a man of his word,” repeats Reyes, in the first image.

In another of the videos Dominguez can be seen coercing Dr. Alonso to repeat “I will not be filming again, or harassing the Sandinista militants, or the people, or altering the order.” And in the third video the son of the marriage appears repeating: “I pledge to respect peace, to respect the laws, to respect the Police and the communities of our country for the benefit of peace. Peace is not played with, non-repetition.”

“Peace is not played with” and “Non-repetition,” are phrases taken from the speeches of Vice President Rosario Murillo. These same words have been used as partisan slogans in recent weeks, just as the persecution against the Catholic Church increased.

Prior to the humiliating filming, the Police knocked down the door of the house with a mallet, beat the three members of the family and stole their cell phones, computers and all the devices they found in the house.

The Police Chief could not explain the reasons for the raid and, before the complaints of Reyes Alonso responded: “You provoked it” while the officers broke the locks of the house.

Dr. Maria Eugenia Alonso said after the assault that they “handcuffed us, threw us on the floor, kicked us, beat us everywhere. Then they sat us down and continue to beat us and through beatings they made us pledge that we were not going to continue bothering the Government, or raising up the people, or being a nuisance to their Sandinistas. Through beatings,” she said.

According to Alonso she “was not bothering the Government, I am demanding peace, justice and freedom” and despite the aggression suffered she said that they will not shut her up.

Before, in a live Facebook broadcast, made by Diego Reyes Alonso, the elderly Margarita Flores de Alonso, 94, is perceived crying grief-stricken during the attack. Simultaneously, a member of the family is heard saying: “they do not even respect my 94-year-old grandmother, who suffered a stroke because of this same siege” we´ve been under.

Likewise, the video shows Dr. Alonso telling the police chief “all the people are witnessing this illegal raid where you do not show any papers, just force, because you are the chief.”

The transmission, which lasted several minutes, ended when the Police entered the house and assaulted the family. The neighbors of the house, located in the “Villa 23 de Julio,” approached to demand an explanation and were also attacked.

Magda Alonso, granddaughter of Dona Margarita, denounced the attack—through social networks—and held the Government of Nicaragua responsible for “any harm to the physical integrity of my family. Enough of so-much repression. Repression only generates hate and more violence. We must begin to build a future of peace and that is only achieved with respect,” she emphasized.

For her part, the human rights defender, Maria Oviedo, explained that what happened with the Reyes Alonso family, in Leon, constitutes a series of (actions) “against freedom to act, against the economic order, against private property, against physical and psychological integrity, against intimacy, abuse of authority and a crime against humanity.  All are fragrant (violations),” she stressed.