Journalist Juan Carlos Bow, of Confidencial was wounded in his right hand while conducting an interview.

There was violence and illegal detentions. They threw tear gas and stunner canisters and shot marbles with slingshots. The deployment included use of police dogs.

HAVANA TIMES – Despite a massive police deployment, students, former political prisoners and other Nicaraguan citizens participated in sit-ins or express protests in various parts of Managua and other cities of the country on Thursday, July 25.

Once again, the prohibition on any peaceful protest march was in effect and Ortega’s Police responded with violence and illegal detentions against protestors.

Since September 2018 Ortega has imposed a de facto state of emergency. On Thursday his agents hurled teargas and stunner canisters and shot marbles with slingshots against the demonstrators.

The day left several wounded and at least a dozen detainees for several hours, according to a preliminary assessment of the protest.

The pickets and sit-ins of citizens carrying blue and white flags and balloons were organized to protest against the repression and the Ortega Murillo regime in various areas of the Masaya roadway and other places in Managua. There were also lightning protests in Matagalpa, Bluefields, Masaya and Leon.

Confidencial reporter Juan Carlos Bow was wounded with a marble on the index finger of his right hand, while conducting an interview with the companion of a young man kidnapped by the agents. 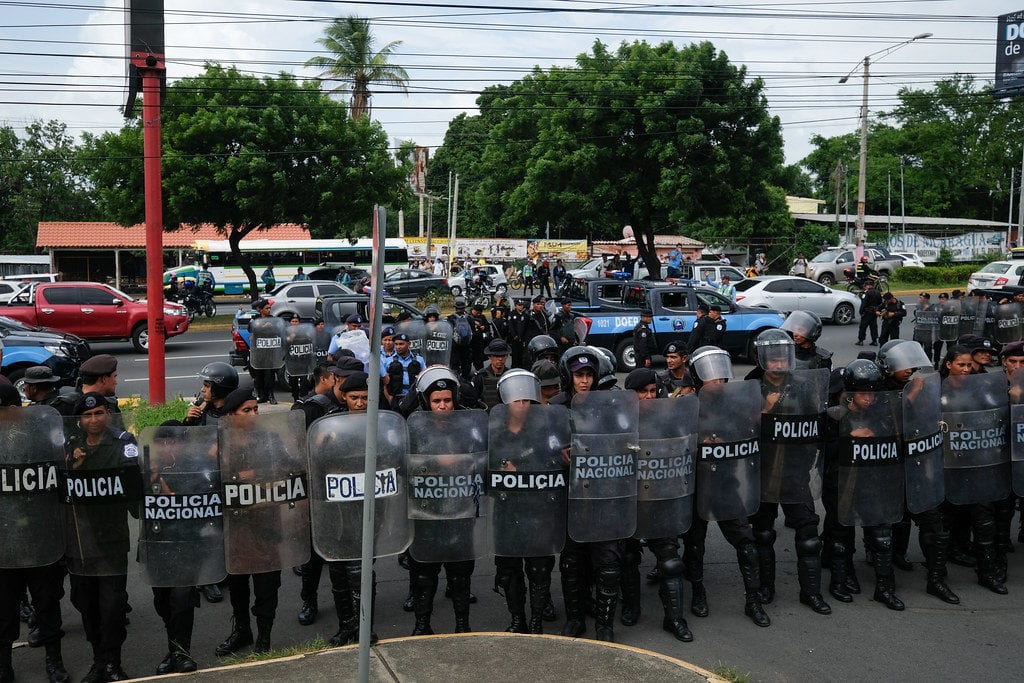 The huge police deployment was intended to thwart a march called to commemorate National Student’s Day, however despite the repression several smaller protests occurred.

Since the Police occupied the public spaces where the march was to take place, the students and other opponents made demonstrations in parking lots of private buildings, some of which were infringed on by the agents to carry out detentions.

The Police prohibit all protests against Ortega, including the singing of the national anthem or raising the Nicaraguan flag, although such measures clearly violate the Constitution.

The police and pro-government groups, which this time did not fire gunshots, shot pellets, marbles and stones at the protesters, some of which damaged private property.

The attacks worsened every time opponents shouted slogans against Ortega, such as “Daniel, listen: we are still in the struggle!” Or “He is a criminal, not a president!”

Members of the opposing Blue and White National Unity movement also reported that two people were beaten by police and paramilitaries near to where the protests were held, and two others suffered similar assaults at the moment they were captured. 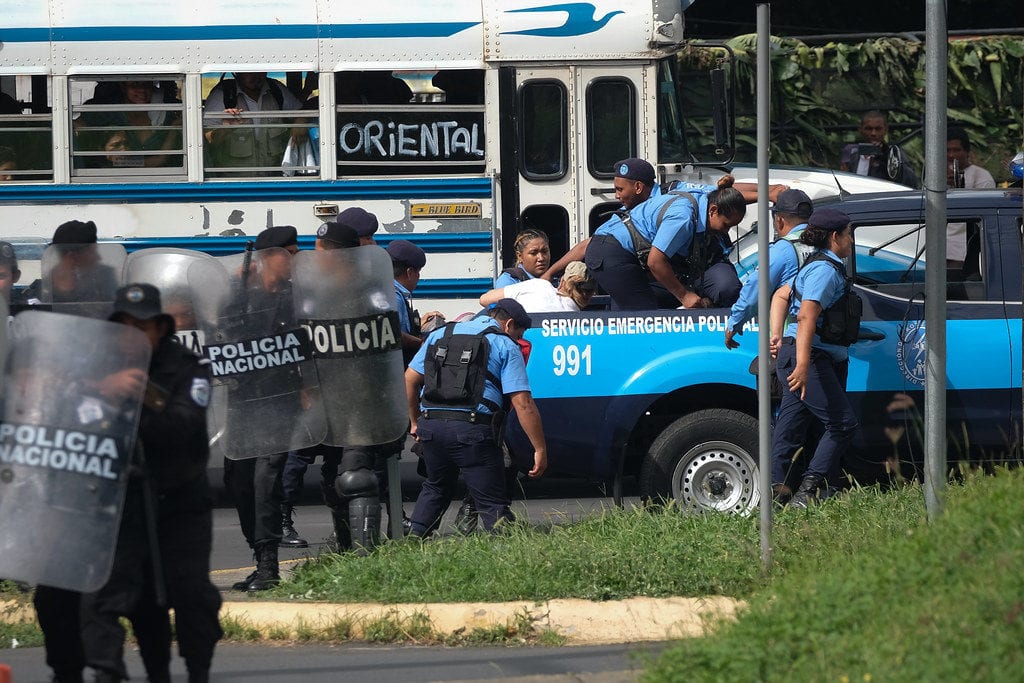 Most of the captured protesters, among them the son of a veteran local journalist, were released a few hours later, the opposition confirmed.

The violent repression took place in at least four points in Managua, where protesters had concentrated in their attempt to participate in the march.

Also in the Departments

In the departments of Jinotega, Masaya and Matagalpa, as well as in Bluefields in the South Caribbean Autonomous Region, there were moments of tension due to similar protests, which were blocked by a large police presence.

In Matagalpa, riot police surrounded the Cathedral where a group picketed. A “Radio Vos” journalist was attacked and beaten by Sandinista supporters while doing a broadcast; they also stole his phone. In Bluefields, a demonstration was besieged by the police, while in Leon, an increase in police presence was reported. 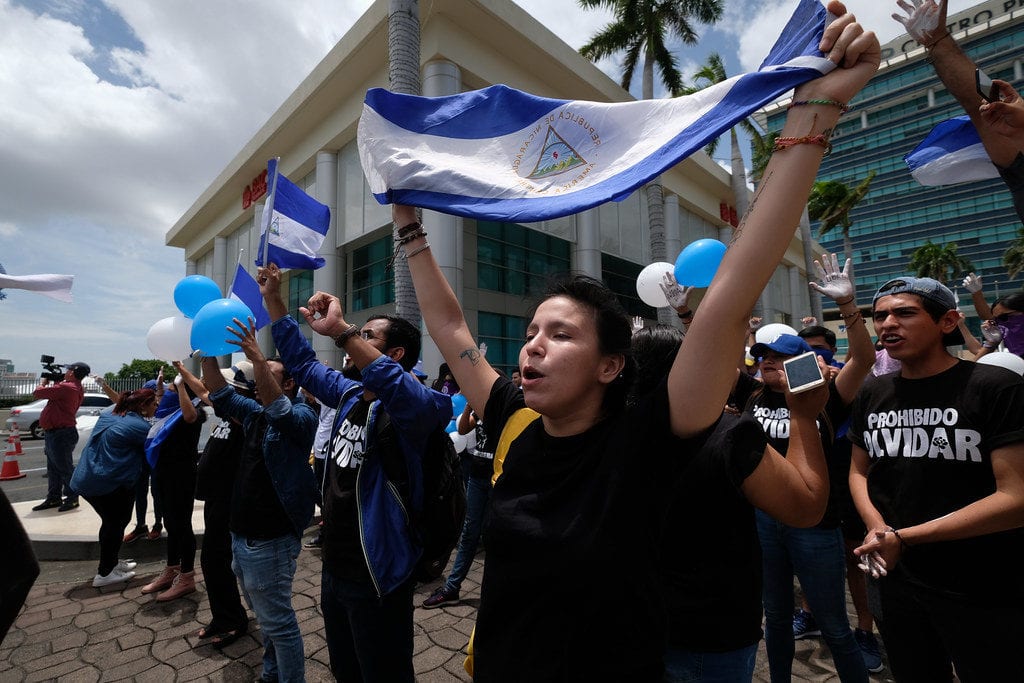 On the eve of the protest, the Office of the United Nations High Commissioner for Human Rights and the Inter-American Commission on Human Rights urged the Government to allow the march. But the Government did not agree and once again opted for repression, which between April and September of 2018 left 325 dead and thousands of injured.

The students, who since April 2018 call for the resignation of Daniel Ortega, intended to commemorate the massacre of July 23, 1959, when the Somoza dictatorship ordered an attack against a student demonstration, which left four university students dead in the city of Leon.

The event took on renewed relevance in 2018, with new armed attacks, this time from the Ortega Government, which have left hundreds of dead, including scores of university and high school students, according to national and international human rights organizations. 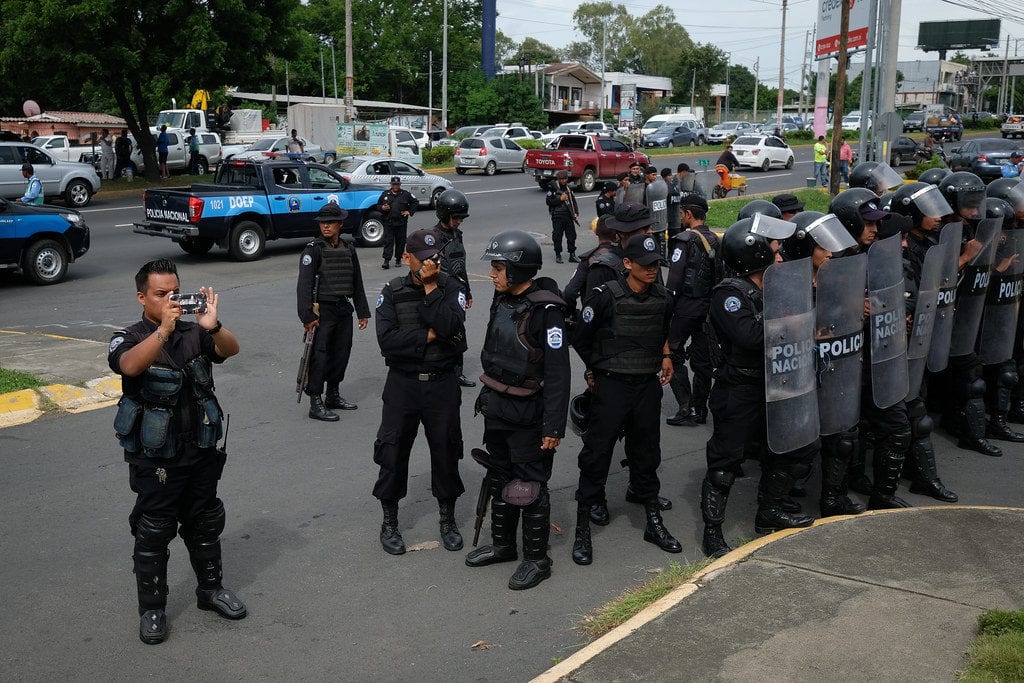