HAVANA TIMES – If everything goes according to the Ministry of Agriculture’s plans, in March, residents in five eastern provinces, + Camaguey and Isla de la Juventud, will be able to buy some potatoes at controlled prices. This is what Juventud Rebelde newspaper reported last week.

However, this good fortune will not be long-lived. Cuba’s State purchasing entity ACOPIO’s vice-president explained to this very same newspaper that potatoes will only be distributed in the capital, in May, June and following months.”

The dozens of comments following the article clearly illustrate the repercussions the news has had. Most of them question the distribution program established by the government in this case, which prioritizes potato-producing regions and Havana, the latter because it has the “advantage of being surrounded by provinces such as Artemisa and Mayabeque.”

Plus, as of May, Havana residents will be the only ones in the country who will be able to eat French fries, receiving nine times the rations assigned to their fellow countrymen in the center-east of the island, between February and April; three and a half times more than residents in Pinar del Rio and Sancti Spiritus; and more than double what residents in Matanzas, Cienfuegos, Villa Clara, Ciego de Avila can expect to receive.

Setting aside the incongruity of potato distribution, it’s surprising to note that by the end of this harvest season, production will exceed the same period in 2019 by nearly 32,000 tons. Especially because this increase in yield is thanks to greater areas having been planted.

And there’s a reason for this: potatoes are the highest priority crop grown in Cuba. As a rule, potato farmers receive benefits that only reach other agricultural sectors in a very limited way, such as irrigation systems and the regular distribution of fuel, spare parts, fertilizers and plant protection products. Harvest collection and payment isn’t normally a problem either, unlike what happens in other farm activities.

Even though the Ministry of Agriculture explains this frugality by giving details about its operation costs, we can assume that with the resources allocated to growing an additional 1550 hectares of potatoes in this harvest campaign, a lot could have been done to encourage the cultivation of other root vegetables that are more compatible with our climate: sweet potato, and malanga and also plantains, for example.

[Editor’s note: the government loves to dazzle people with meaningless big numbers that have no relation to what people actually see at their ration stores or free markets.]

Such contributions of malanga, sweet potatoes and plantains take on their true significance when you bear in mind the fact that most of them were cultivated in fields lacking irrigation and proper fertilization, sown by farmers who suffer delays with harvest collection and payments every year. Not to mention the high energy consumption of refrigeration to preserve potatoes collected at the beginning of the year, for months.

Glory days of the potato

In the 1980s, the Cuban government and the former East German government signed a unique agreement. During the autumn, the European country would freight two tons of potatoes to the island for every ton that they were sent by Cuba at the end of the spring harvest. 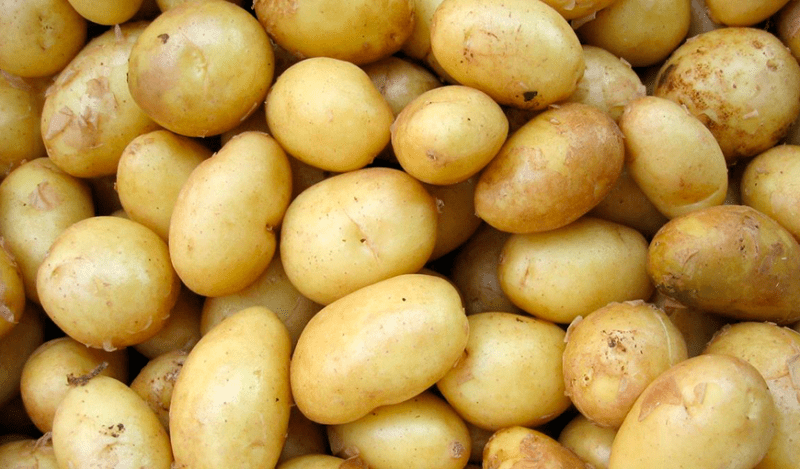 That was a “win-win” agreement for the Cuban government, because it also meant they could reduce the volume of potatoes being kept under refrigeration and it ensured a stable supply of quality seeds.

However, the “happy ‘80s” are a memory that will be hard to replicate. Not only because of the whims of international politics. Even the climate is now conspiring against what was once considered the “queen of root vegetables” in Cuba.

The steady increase of global temperatures has been crucial in the decision to cut back on land being cultivated for this crop, which was cut five times between 2004 and 2015. An article from 2014 about the matter, highlights how the government decision was to limit “activity to land and areas with a micro-climate (…) with the intention of optimizing resources”, an expert from the Institute of Plant Health Management said.

In addition to high temperatures (which encourage lower yields and pests), seed prices also went up, which were almost always purchased abroad.

Five years later, the import substitution industrialization policy which president Diaz-Canel is pushing, is taking a chance of recovering potato production. Following the government policy, most of the increased production this year will be destined to meeting the needs of national industry and tourist facilities.

At the same time, the optimistic authorities hope harvests will help to ensure a stable supply to residents in the capital and to also help balance out distribution at a national level.

One thought on “Potatoes in Cuba: Short Term Availability for Some Provinces”