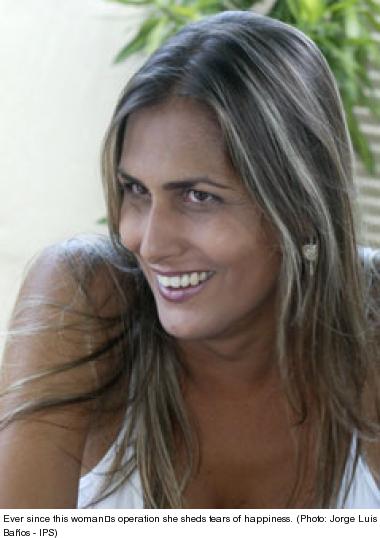 HAVANA TIMES, Jan. 26 (IPS) — It was as if she had only closed her eyes for a moment. When Wendy Iriepa came round after surgery over a year ago, she tried to get up as if nothing had happened, but a nurse gently pushed her back into bed. “All done?” she asked, and the nurse replied, “Yes.”

“I wanted to look at myself, and I managed to feel how I was now. That thing I had had to live with for 33 years of my life was gone for good,” Iriepa, a Cuban transsexual who had the sexual reassignment operation approved by the Public Health Ministry in 2008, told IPS.

“When they finally removed my bandages, I went to the bathroom and I saw my reflection in a huge mirror. It was the happiest moment of my life. The 16 days I spent in hospital were neither an ordeal nor a form of imprisonment for me, but a spiritual liberation that freed my soul,” she said.

As she tells her story, the tears flow again. But since her operation, her tears have been mostly of happiness. Basically she is still the same person, a hard worker and a stubborn rebel, yet she has also changed, and not just physically. Powerlessness and all its consequences are buried in the past along with that burden that was “always dragging me down.”

Her reflection in the mirror was her constant companion, every day. She would go to the bathroom and see that “up above I was one thing, and down below another.” In the morning she would bind her genitals in tight underpants that marked and irritated her skin. She would try to regard “it” as if it were just like an arm, and put cream on it, looking after that skin because, like it or not, “it was part of me.”

“I felt no pain with the operation, and if I did feel any, it was nothing compared to what I lived with before in society, as I told the surgeon. To me, it was as if my female genitals had always been there, and what I actually had previously was only a mask, something that hid the real shape that was already there,” she said.

The first child, and only son, born to a working class family, she soon discovered she was not what her father wished her to be. At the age of three she played with dolls, and when she started school she cut the shorts of her uniform to make skirts instead, and tied towels around her head to imitate long hair.

At the age of 10 she had her first relationship, with a teacher, one of the few people who gave her affection at a time when she was being criticized and censured by her parents and fellow primary school pupils. One day the head teacher called her and said, “either you leave school or I’ll tell your parents about you.”

“That’s when I started hanging out at my cousin’s house. She would lend me her dresses and her bathing suits to go to the beach; I would hide my genitals and I lived life as a girl. The problems with my father continued, until I left home when I was 12. When I went back two years later, I already had breasts,” she said.

She had heard her sister say that a contraceptive pill was enlarging the size of her breasts and, without consulting anyone, she started taking two pills a day. It was like a religious rite for her, and it was one of the major turning points of her life. “I began to dress as a woman; my father would say ‘you look like a clown,’ but when I looked in the mirror that wasn’t what I saw.”

“It was hard work for me to live down this change in my neighborhood. People would shout and jeer at me, but away from my area, men saw me as a woman, as the person I felt I was and who I had struggled to be all my life. When all the men, everyone from doctors to policemen, made flirtatious remarks to me, I knew that this was the way my life had to be.”

She was 17 when, in 1988, she heard about the first sex change operation performed in Cuba. She went to see the surgeon who had done the operation, and he sent her to see psychologists Mayra Rodriguez and Ofelia Bravo of the National Sex Education Centre (CENESEX). Two years later her status as a transsexual was confirmed.

“Mayra, who has been a true mother to me, made my father understand that I really hadn’t chosen to be this way, but that there was a mismatch between my psychological sex and my biological sex; that it wasn’t a case, as my father complained, of going against him or wanting to disgrace the men in our family,” she said.

Through CENESEX, she was able to start hormonal treatment to feminize some of her physical attributes, without surgery. The Centre also made the necessary arrangements for her to change the name on her identity document to the name she had chosen. On Jul. 7, 1997, she was officially registered as Wendy.

But it was not all plain sailing. Her life at CENESEX was one thing, but in the world it was quite another. She fell in love, and was disappointed, over and over again. She was systematically abused by one partner, and like many others before her, she felt that prostitution “was the only means of survival this society gave me.”

Things got so bad that she locked herself into her house and would not go out. “But time passed, I still had no job and was living a very promiscuous life, until one day I went to see Mayra, in tears, and I told her: I need your help, I need a job. And I started right there, working for the services department at CENESEX.”

Five years later, she is a trusted key worker, handling the files of people who come to the Centre looking for help. She completed sixth grade and plans to finish secondary school and take a secretarial course. Her dream is eventually to attend university and take a psychology degree.

A place in society

Of the courses she has taken at CENESEX, one of the most important, in her view, was on her rights as a citizen: “it turns out we have the right to wear whatever we like, and yet the police would stop transvestites and fine them for wearing women’s clothes. Now we know our rights, we know the law and we can insist on being respected.”

CENESEX, headed by sexologist Mariela Castro (President Raul Castro’s daughter), promotes policies in favor of full acceptance of people’s sexual orientation and gender identity, and campaigns against homophobia and transphobia (discrimination against transsexual and transgender people). In Wendy’s view the Centre has given transsexuals the tools they need “to command greater social respect.”

The group of transvestites, transsexual and transgender people who frequent CENESEX have not only received courses on self-image, communication and popular education; many have also become accredited health promoters, and participate in designing the Centre’s programs on sexual diversity.

Some of the more active and educated of these women frequently play a role in awareness-raising activities in different settings, alongside CENESEX experts, sitting on panels about sexual diversity at film festivals, conferences or international meetings on sexuality or AIDS.

“We are open to all who wish to get to know us, and discover that we are not monsters and that we have not broken social norms just because we wanted to, but because this is the way we are, and that we deserve to be respected. We deserve a place in society, and to be looked upon not as strange creatures, but as people of this society, people of these times,” she said.

And in spite of knowing how much still needs to be done before society will accept her as she is, just looking Wendy in the eye or watching her walk through the streets of Havana is enough to know that she is a free and happy woman. In her view, “happiness is made up of moments in life that you treasure inside yourself, and they determine the direction of your life.”