Questions persist regarding the role that organizations like the OAS could play.

The regime’s refusal to admit Bishop Alvarez was the “delay” that kept the “roadmap” from being approved earlier, sources close to the negotiations confirmed.

HAVANA TIMES – Following five discussion sessions and amid the distrust of Nicaraguan citizens, the Ortega-Murillo dictatorship and the Civic Alliance approved the so-called “roadmap” to begin the political negotiations that could open the doors to finding a solution to the sociopolitical crisis. The calamity, now in its 11th month, was triggered by the government repression exerted against widespread civic protests that broke out in April of 2018.

Both sides agreed to call in the Apostolic Nuncio, the Episcopal Conference, and a representative of the protestant churches as witnesses and accompaniment.  However, the national and international guarantors will be defined only after the agenda is approved, defining the central topics to be discussed.

Waldemar Sommertag, the Vatican’s representative in Managua, read a communique and the agreed-upon “roadmap” to the press. He was accompanied by foreign minister Denis Moncada and university student Max Jerez of the government, and Civic Alliance negotiating teams.

This decision provoked some suspicion among the population who expected that the guarantors, especially the international ones, would be defined with the roadmap. Nonetheless, a source close to the negotiations explained to Confidencial that these can’t be named without first establishing the topics to be negotiated.

“No one can guarantee, nor serve as a guarantor for something that hasn’t been agreed upon,” he explained in reference to the agenda points for the dialogue. “In the international negotiations used as points of reference – for example those that took place in Ireland – the guarantors were approved once there were concrete agreements, so that compliance with these can be measured,” he added.

However, the source recognized that since “there’s distrust” around the negotiations held in the INCAE business school, the Civic Alliance and the Sandinista regime agreed to “immediately approve” the international and national guarantors when “partial accords have been reached”.

“That is, if the electoral topic, having to do with free elections and the restructuring of a healthy system, is approved for the agenda, the Organization of American States (OAS) will immediately be approved as a guarantor,” the source assured. “If you look at the declarations of Luis Almagro, he stated that they’d be willing to serve as guarantors only after the political prisoners have been released.”

Upon finalizing the fifth negotiation session on Tuesday, the Civic Alliance issued a statement highlighting their proposed agenda points: “Freedom and security for the political prisoners; the reestablishment of the rights and freedoms guaranteed in our Constitution; electoral reforms that guarantee just, free and transparent elections; and justice.”

Will the regime accept guarantors?

Neither the source consulted by Confidencial nor the Civic Alliance in their statement revealed if the government is disposed to discuss the topics put forward by the opposition. Much less whether there are assurances that the government will accept guarantors such as the OAS or the Inter-American Human Rights Commission. Confidencial has learned that the dictatorship will propose only “three points”, but these have not yet been revealed.

In accordance with item 10 of the “approved roadmap” which refers to the topics to be discussed: “the agenda will contain the topics and principal points that the delegations propose and adopt by consensus in the negotiations”.

The source, who had knowledge of the negotiations, expects that by Wednesday the agenda with the major topics will be defined and that the process won’t be as drawn out as that needed to reach consensus on the roadmap.

The following is the full Roadmap approved yesterday by the Ortega-Murillo dictatorship and the Civic Alliance: 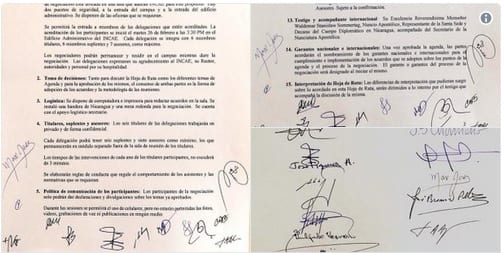 1. Place and date: The INCAE Campus, Wednesday, February 27, 2019, 10:00 AM. The negotiation table is located in a room that INCAE adapted for this purpose. There are two security posts at the entrance to the campus and at the entrance to the administrative building. The offices that are required are available.
Entry will be allowed to members of the accredited delegations. The accreditation of the participants began on Tuesday, February 26 at 3:30 PM in the Administrative Building of INCAE. Each delegation is comprised by 6 full members, 6 alternate members and 7 advisors, at most.
Negotiators may remain and reside on campus for the duration of the negotiation. The delegations expressed their gratitude to INCAE, its Rector, authorities and staff for their hospitality.

2. Decision making: Both to discuss the Roadmap and the different Agenda topics and for their approval, the consensus of both parties is the way in which the agreements and the methodology of the meetings are adopted.

3. Logistics: A computer and printer are available to draft agreements in the meeting room. A Nicaraguan flag and a round table were set up for the negotiations. It has the necessary logistical support.

4. Delegates, alternates and advisers: The six delegates of the delegations will work privately and confidentially.
Each delegation may have six alternates and seven advisors at most, which will remain in a separate module outside the meeting room of the delegates.
The times of the interventions of each of the participating delegate will not exceed 3 minutes.
Behavior rules for the attendees and regulations that are required will be drawn up.

5. Participants’ communication policy: The participants of the negotiation can only give statements and disclosures about the topics already approved.
During the sessions cell phones will be allowed, but photos, videos, voice recordings and publications will not be allowed in any apparatus.

6. The Media: There will be a presence of journalists and media at the INCAE facilities when they are called.
When the announcement is made, the media will be located in a suitable space for the press conferences.

7. About the meetings: The meetings will be held daily, from Monday to Friday, from 10:00 AM to 4:00 PM with the possibility of extending.

8. Agreements: The main outcome of the negotiations will take the form of agreements, which will be signed by the parties.

9. Time Frame: The negotiation process will tentatively end on March 28, 2019, or the date agreed by consensus by the delegates.

10. Issues to be addressed: The agenda will contain the topics and main points that the delegations propose and adopt by consensus in the negotiations.

11. Working Commissions: The delegates may agree on the formation of work commissions.

a- Cardinal Leopoldo Jose Brenes Solorzano, Archbishop of Managua and President of the Episcopal Conference of Nicaragua, with two advisers. Subject to confirmation.

b- A Representative of the Pastors of the Evangelical Church of Nicaragua, Interdenominational Pastors United for the Nation, with two Advisers. Subject to confirmation.

13. Witness and international companion: Waldemar Stanislaw Sommertag, Apostolic Nuncio, Representative of the Holy See and Dean of the Diplomatic Corps in Nicaragua, accompanied by the Secretary of the Apostolic Nunciature.

15. Interpretation of Roadmap: The differences of interpretation that may arise on what was agreed in this Roadmap, will be resolved internally by the witness who accompanied the discussion of it.

16. Final Protocol: At the end of negotiations, all agreements, which have previously been agreed and communicated, will be compiled in a general final agreement, which should be reviewed and approved by both parties.