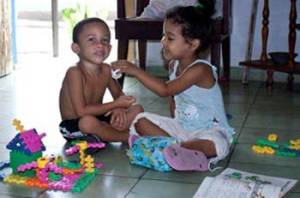 Of course those kids have no real idea of the seriousness of the situation, for them it’s just a game. They’re only imitating what they see and hear every day. They reproduce in their antics the words they hear from grown-ups in their homes and at school.

They also represent what is taking place at the entryways of all public establishments, where it’s mandatory for people to wash their hands with soap and water, then with bleach, and finally wipe their feet on a mat soaked in chlorine or formaldehyde.

What has actually been happening is that for three weeks, in the city of Santiago de Cuba and those towns closest to it, public health security measures have intensified to deal with outbreaks of the diseases suffered in these communities.

The strange thing is that officially no statements have been made by medical or health care authorities or others involved with this matter.

Notwithstanding, access to all public places (schools. offices, warehouses, markets, shops, candy stores, clinics, etc.) all require people to go through that obligatory ritual of washing their hands with soap and chlorinated water, and then wiping their feet on a mat.

The same applies to the terminals when leaving or returning through various means of transport. In addition, streets and houses are being fumigated while an army of medical students are going from house to house almost daily asking if anyone has experienced fever, vomiting or diarrhea.

Public speculation is increasing as people talk about alarming numbers of cases of cholera, dengue, leptospirosis, swine fever and other infectious diseases. The truth is that these comments are based on the number of patients admitted with these diagnoses in many hospital wards authorized to attend them.

The authorities have prohibited people from raising pigs in their homes, giving the owners an ultimatum of getting them out of the city or sacrificing them. Likewise, there are now prohibitions on self-employed vendors in kiosks from selling light snacks, beverages (including soft drinks), milkshakes, coffee or anything else containing water.

People’s questions, prejudices and speculation are all growing. Officially, any report on the situation is still being kept in locked draws, but it’s undeniable that Santiago is suffering from an epidemiological crisis. Some people are saying the city should be declared in quarantine.

But secrecy is being maintained as usual, and the situation will only be made public when some foreign media source publishes the death toll.