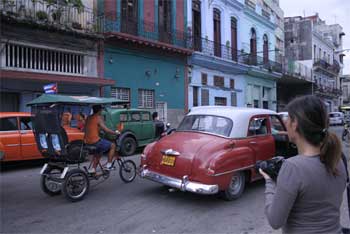 HAVANA TIMES – Here are some stories of scams in the only country in the world with a dual currency.

From among many memories and anecdotes I have compiled, I can’t forget that man who was sitting in the park, which I cut through every day so that I could arrive early to work and the day’s first obligations.

It was evident that he urgently desired to speak with someone. You could see it in his eyes and in the anxiety of his gesture as he interrupted my hurried passing and asked me haltingly, “Do you speak English?” to which I responded with an emphatic, “Yes, I do!”

We quickly covered the routine questions about his country and city – the remote Vancouver, far from Havana – to arrive rapidly at the reason for his urgency: it was a Cuban bill of the type known as “Convertible Pesos,” which at that time had a one-to-one equivalency with the U.S. dollar.

Since I, too have suffered at being swindled, I quickly read in his face that insecurity you feel when something isn’t quite right, and you realize that you may have just done something you shouldn’t. For a Cuban, one look at the bill revealed that it was a fraud, since someone had very clearly written “One Hundred” where it previously said “One”.

If you observed the front of the bill, the lack of grammatical agreement was also evident: it spoke of “a peso”, and you couldn’t add the phrase “convertible pesos” since the reference appears first in the singular and then changes to plural.  This detail plainly reinforced the notion of a falsification.

The Canadian looked at me with expectation, and I, having noted the details above, struggled to find a way of confronting the consummated facts.  At last I found the courage to tell him that, unfortunately, he had been swindled. 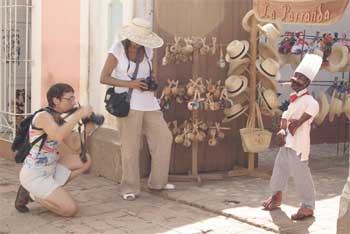 In my best English I tried to explain the issue to him, although by now there was no possible solution. We could only determine exactly what had happened and come to some conclusions.  This last process is like scratching a wound, but the man lived up to the reputation of his fellow citizens and accepted the challenge.

It turned out that one of those people of very poor scruples underneath what may be an acceptable appearance offered him “the advantage” of a “one to one” exchange between Canadian dollars and Cuban convertible currency.  If he had gone to an official money-changing site, known in Cuba by the acronym CADECA, the exchange rate would have been thirty percent less.

Speaking in the lingo of the police, the modus operandi  of the con-man was the classic “bait” offered before the swindle. It’s necessary to make the victim believe in the real possibility of obtaining a substantial advantage as a result of the proposed transaction.

We parted ways: the tourist heading back to his hotel with only one convertible peso, instead of the hundred that he had hoped to obtain, not to mention the day ruined; me with the hope of restoring a bit the bad image of our beautiful country that my fellow countryman had left him with.

The next morning, he answered my telephone call from his hotel room with an occasional excuse and the affirmation that he was headed for Varadero, a paradise of white sand beside the ocean, far from Cubans and double currencies. This time my persuasion didn’t register. The Canadian was very irritated.

“Time passed and passed, like an eagle by the sea,” as go the poetic words of José Martí, the Apostle of our Independence, whose image graces our national money.

This time it was a young Portuguese couple, appearing to be people of modest income. Their faces were two poems, but of a different nature: that of the woman, an epic; that of the man, a tragedy. The woman, I must add, was almost certain that her husband had made a mistake, while he was still doubtful.

I was leaving the church when they approached me. The Portuguese woman asked me to help her husband resolve his doubt, apparently dismissing the events themselves as water down the drain. Once again I took a bill in my hands and again the fraud was clear, but this time it was “technically different” as we would say in police lingo.

There were two fifty peso bills, but of the denomination “National Money;” in which each twenty-five is equal to ONE Cuban Convertible Peso, which I mentioned in the previous story. 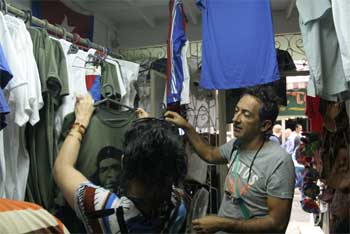 Once again, the use of language is curious, taking advantage of ambiguity and lack of precision to promote the following scheme:

As it happens, even today as I write this, years after it happened, bills circulate with a curious inscription, completely archaic and I believe copied from the United States dollar bill.

I hold in my hands a bill from the year 1991, series CA 80, number 411344 and here is an exact copy of the text that appears in small boxes in the part below, just before and after the monetary sign:

“Integrally guaranteed with gold, foreign exchange convertible in gold, and other active shares of the National Bank of Cuba. This bill constitutes an obligation assumed by the Cuban State.”

“This bill has unlimited legal course and liberating force, in accordance with the law, for the payment of any obligation contracted or to be completed in national territory.”

The con man reads these texts to the victim with great emphasis, assuring them that these are “Convertible Pesos”, and thus implementing the fraud.

At any rate, tourists should change their money in a bank, which abound in Havana and the rest of Cuba, or in the Money-Changing Houses, CADECA, as I repeat.

Nonetheless, for these visitors from Portugal, the story had a happy ending. The meager Hundred Pesos in national money were at least enough to reach their hotel. The couple reconciled, and on the morning of the new day we saw each other walking down the Havana streets.

For my part, I alleviated my distress over the sin that another had committed, by explaining to them all the beauty of my country, while I listened enchanted to their descriptions of the excellent smoked meats produced there in Braganza, near the Galicia of my grandparents.

I could mention the names of the people involved in both stories, but since those who perpetrate such swindles generally disappear without a trace, it’s better to just hold on to the experience.

In addition to providing a necessary caution for any visitors, I learned that even in the worst circumstances you can make friends.

4 thoughts on “Stories of Con Games and the Conned”