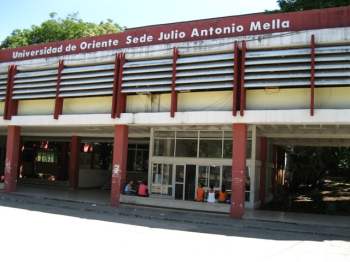 HAVANA TIMES, May 11 — In January of this year I started studying Spanish at the University of Oriente in Santiago de Cuba. I had wanted to do this for some time and in the second half of 2010 I began to make plans. This was not easy. I never managed to get an answer to any of the e-mails that I sent to the university.

Fortunately, I have a good contact in the city, who has many contacts at the university, and with her help I managed to get the student visa, which I collected from the Cuban Embassy in London.

Finding out about when the classes started and where they were was equally difficult. I managed to work out, with the assistance of my friend, that there were three stages: first, apply for and receive the student carnet (ID card – different from the visa, which is issued in your own country); second, sign a contract detailing hours of study and costs etc.; finally, undertake a test in the language department to ascertain what level of tuition I would need.

Applying for the student carnet involved waiting for two hours outside of the office for foreign affairs at the university, before completing the relevant paperwork (the previous day I had had to get photographs made and acquire some stamps from a specific bank).

The following day I had to wait another two hours at the immigration office before being fingerprinted. I was then advised that the immigration office had a shortage of plastic for the cards and that if I wished to avoid a lengthy delay, it may help if I bought the plastic privately. A woman in the queue advised us of a private address where I could purchase the plastic and this I did, giving it to the foreign affairs office at the university.

I then waited for the ID card to arrive. A couple of times a week I would call into the office at the university, but each time the answer was the same: it has not arrived yet. The course was due to start on January 18th, so the day before, I called in and asked how I could start classes the following day and was advised that I could not, because first I needed the contract, which could not be completed until they had the number of my carnet.

Fortunately, my contacts at the university were able to assist and, after a bit of negotiating on my behalf, I was given a slip of paper advising the teachers that I could start without the necessary paperwork, because I was awaiting its arrival. On Tuesday 18th, without contract and without carnet, but with a handwritten slip of paper, I went to the university and was given a test. Fortunately, my three years of self-study with books and CDs had produced some results, because I was placed in the intermediate level.

I started classes the following day. My two fellow students were only studying for four hours, one day, per week and were in their second year of study. I felt that I ought to do a bit more, so I agreed to do an extra two hours on a further day, with one to one tuition.

This lasted for three weeks or so. We had an air-conditioned classroom, with a modern computer, that did not work. The teacher had one course book, of which she was a co-author, but no other copies for the students. There was a whiteboard, but the pens barely worked and it was almost impossible to read anything that was written there. However, the teacher was excellent.

The bad news was that the teacher then informed us that she was going off to teach in Venezuela the following week and we would now have another teacher, in another campus. We would be joining two Canadian exchange students, who had been studying there since mid January.

The good news is that my carnet eventually arrived, after a wait of 27 days. This gave me temporary residence, until the end of the year, when I could renew it if I wanted to stay longer. If I wanted to leave Cuba during that year, I needed to apply for permission. I could leave Cuba for up to 180 days at a time. The carnet enabled me to travel on the Astra bus network paying the same moneda nacional amount as Cuban nationals; to visit museums paying the same price as nationals; and enabled me to go to the Casa de la Musica in Havana or the Tropicana in Santiago paying the Cuban price also.

The classes with the Canadian students were in a different campus. Instead of four hours a day, it was only two, each day from Monday to Thursday. The new teacher worked to a different course book, of which, like before, there was only one. After two weeks of the new arrangements, our teacher advised us that she would now only teach us on Mondays and Wednesdays; we would have a different teacher for Tuesdays and Thursdays. This new teacher was also very good, but worked to yet another course book (of which, yet again, there was only one).

Did I learn much in my three months? Because the course did not actually start until January 18th, I only studied for about eleven weeks. It would be impossible to spend that long in a Spanish speaking country and to attend that many lessons and not improve my Spanish speaking skills. However, after that many lessons I would really have expected to have learned a lot more.

I think that something as simple as having my own text book to follow would have helped me greatly and enabled me to learn more. For me to learn a language I need to see it, hear it and say it; but without a text book and often without the ability to read from a board, one of the three senses was not being utilised. I would gladly have paid the cost of a book. It would also have been good not to have had two changes of teacher and to have followed the same course.

However, despite all of its shortcomings, my intention is to return in October and resume my studies. Studying in a Cuban university, with its lack of resources and poor organisation, is a challenge. The upside is that the staff are very enthusiastic and very keen to help you learn. It is a great opportunity to learn what life in a Cuban city is really like. Santiago de Cuba is a great city and I cannot wait to return.

A friend of mine is studying Spanish at the university in Havana. His course sounds very different – properly structured; the students have books; and they are expected to attend classes. So if studying the language is your primary purpose, Havana would probably be best. For me, I will stick with the chaotic yet relaxed ways of the Oriente.

(*) Read more from Michael Shaw on his blog: Tales of the Heroic City

One thought on “Studying Spanish in Santiago de Cuba”