As a transgender woman, everything has been twice as hard for her. She’s suffered from discrimination and before becoming a political prisoner, she’d received a number of death threats.

HAVANA TIMES – It seemed that nothing could stop her. She got up from her chair, took the microphone and raised her voice. “We have the right to live. Without life, we have nothing. I’m grieving for Nicaragua,” she said brusquely. Many applauded, others yelled; with more assurance, she continued talking. That was her moment, and no one could silence her. She’d travelled from Nicaragua to Argentina to denounce the government of Daniel Ortega, and that’s what she did. Victoria Obando lifted up her voice on behalf of all her companeros/as in the struggle.

Hours later, she told an Argentine reporter that she was fearful. In Nicaragua, the threats made against her and her family had already forced her to move several times, but even so, she’d continue in the struggle. “I have to be in hiding, I have to keep fleeing… they want to silence the voices of those of us who are demanding his [Ortega’s] departure,” she stated sadly.

Upon returning to the country, she kept her promise to continue struggling. That’s how she is, say those who know her. From the time she was small, she learned to demand respect; she fought against discrimination for being a transgender woman, and she later became involved in movements that were defending the rights of people in the LGBTQ community.

Vicky, as her close friends call her, is from Bluefields, on Nicaragua’s Atlantic coast. She was born Victor Manuel Obando Valverde. She loves cooking, dancing, and this year she had begun studying Information Technology at the Nicaraguan National Autonomous University (UNAN) in Managua. Beginning at the end of April of this year, she joined in with the demonstrations against the government of Daniel Ortega. She was involved in the occupation of her university, and since August 24 she’s been in jail, as is Byron Corea. Nahirobi Olivas, Yaritza Rostran, Luis Hernandez, Levis Artola and Juan Alvarado, all of them accused of terrorism.

Victoria and her mother

Victoria’s mother, Yolanda Valverde, looks a lot like her. She has straight hair, a wide forehead and a prominent jawline. At first glance, she looks strong, but each time she speaks of her daughter, her voice breaks. The last time she saw her was a month ago, in the prison known as La Modelo. She hugged her and told her, “be strong”. Victoria burst into tears, while Yolanda did her best to avoid doing the same.

Victoria is the youngest of her five children. Although she left Bluefields several years ago, she remains very close to her mother – they’re always talking on the telephone or messaging via the “WhatsApp”. Every time she came to see her family, she’d pamper her mother.  She’d bring her breakfast in bed, and when they went out she’d always grab her hand or embrace her, Yolanda Valverde recalls tearfully.

In Bluefields, her friends and family members know her by the nickname of “Pibe”. When she was born, her mother didn’t know what name to give the baby, and impulsively began to use the term “Pibe”, a regional word for children in Argentina. Soon everyone in the neighborhood also called the baby “Pibe”.

When Victoria (then Victor) finished her third year of high school, she told her mother that she wanted to study a vocational career, and that’s why she moved to Granada. She lived there in a dorm for three years, studying to become a bilingual tourist guide, and when she returned to Bluefields she worked for two years in a hotel-casino. Later she began studying law and worked in a legal firm. A few years ago, she moved to the northern city of Esteli.

“She didn’t like living here in Bluefields, because since she was little she felt that people were always staring at her, and many would point her out. So, since I have family in Esteli, she left for there. At school her classmates discriminated against her, and I think that’s the main reason that she decided to leave for those places. I’ve always called her “a girl” because her little face has always been pretty and she’s sensitive. She always wanted to go around with the girls,” Valverde says.

From Victor to Victoria

The change of cities gave her the courage she’d been lacking to change from Victor to Victoria, her mother says. She always used feminine accessories, but it wasn’t until she got to Esteli that she began to present herself as Victoria. She became part of the National LGBTQ Round Table in Nicaragua.

She was of the opinion that people with diverse sexuality had to be included in the political programs. She was also involved in different organizations that advocated for human rights in Esteli. She’s a very determined girl, she never gives up,” says her friend Luis Blandon.

In the National LGBTQ Round Table, she assumed the responsibility of getting trainings on human rights; she was aware of new laws and was very interested in inclusive education.  Alexa Zamora, an activist friend, said that one of Victoria’s unique features is the humorous way she would feminize the language.

“She used some very peculiar expressions, and anyone who knows her has heard them. If something was going really well, she’d tell you ‘gananda’, ‘empoderada’, ‘la cuerpa’ [feminine forms of expressions usually masculine in Spanish: “winning”, “powerful”, “the body”]. She was really very funny. She was more feminine than anyone I know,” she affirmed.

Her outgoing personality made it easy for her to make friends. She’s a good conversationalist and almost always dynamic, says her friends, while recognizing that she’s faced discrimination for her sexual orientation, and her romantic relationships have been complicated. 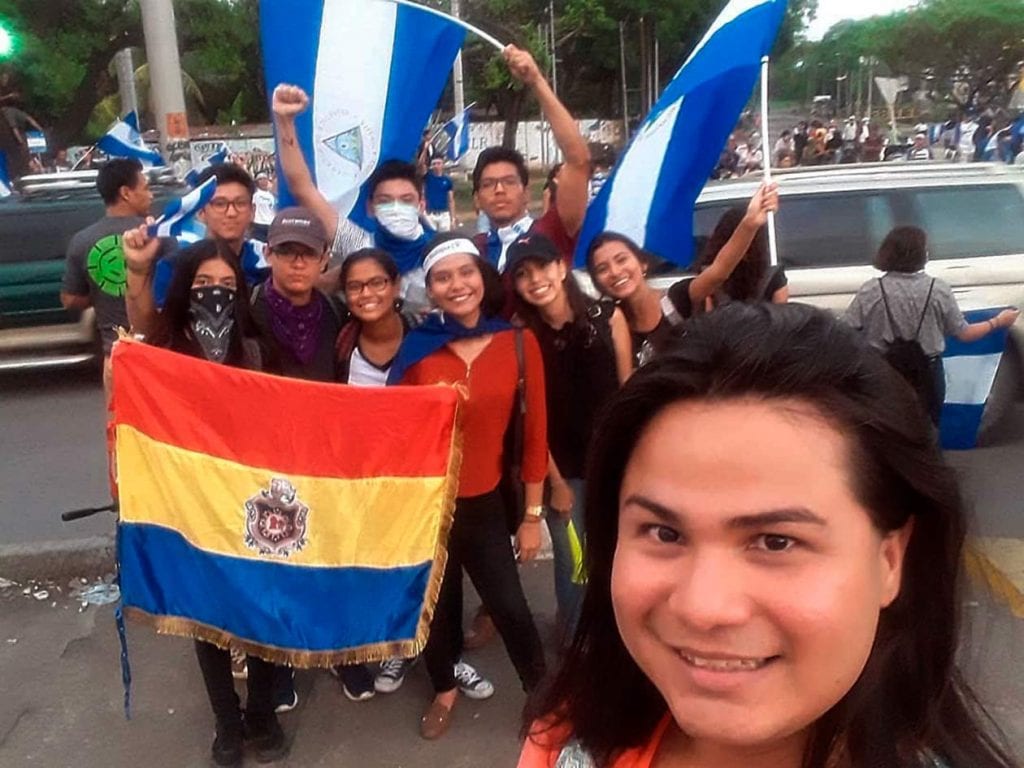 From the first week of protests against the Ortega government, Victoria didn’t hesitate in going out to join the protests. Weeks later the students from UNAN-Managua decided to occupy their campus, and without thinking about it she joined them. Once there, she gained the respect of the others; soon, given her leadership and experience as an activist, she joined the University Coordinating body.

“Her condition as a trans woman has never kept her from doing anything. Her personality doesn’t admit anything like that. She was very important in her wing of the occupation, she always took a very assertive role. The guys had a lot of respect for her, they treated her like they treated any of the companeros in the trenches,” Zamora affirms.

During the time she was in the occupation, her mother, Yolanda Valverde, was unaware of what she was doing. She found out through social media that Victoria was actively participating in the marches.  She grew so worried that she decided to travel from Bluefields to Managua in order to try and convince her to desist, but she was unsuccessful in this.

In June, Victoria travelled to Argentina for the 2018 Regional Conference of Higher Education for Latin America and the Caribbean. There she denounced the human rights violations that were being committed in Nicaragua.

“I’m aware that the university struggle has a high price. We have laws for university autonomy that were snatched away from us, our form of sandinismo has been hijacked as well. All of this has cost us dearly,” she said in the conference.

According to her friend Luis Blandon, after this conference she traveled to Panama. Because of the threats she’d been receiving since the demonstrations began, her friends advised her to seek asylum there, but she always said: “I’m going to go back to my country, because my conscience and my duty call me.”

Before her arrest, Victoria received many threats. There were threats on social media that they were going to kill her, and offensive messages on her Facebook page. In Esteli, people linked to the government came to threaten her family. For that same reason, she had decided to come to Managua, Blandon states.

In fact, the day she was captured in Leon, she had left a safe house to meet with other university students in the UNAN in Leon. Two days later, the National Police accused her publicly of terrorism, homicide, arson, kidnapping, robbery with intimidation and death threats. Afterwards she was transferred to the jail called La Modelo together with the other male prisoners, despite being a transexual woman.

From that time on, of all her family members, it’s her mother who’s suffered the most. She had to leave her work in Bluefields and move temporarily to Managua. She only gets about three hours of sleep each night and barely eats. When she’s seen her daughter, she seems to be strong. She’s said that she’s not been tortured, but when she sees her she bursts into sobs because she imagines everything that her mother’s going through. Victoria’s trial won’t be until December 4th. Her mother has already marked a calendar with the days that she’ll be traveling to see her.

For those that understand Spanish: