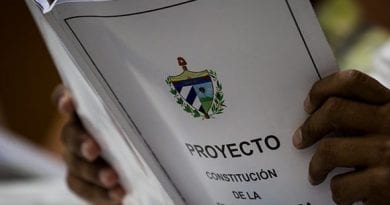 HAVANA TIMES – The draft of the new Cuban Constitution will enter its civil consultation phase on August 13th. To facilitate this, 600,000 printed copies went on sale as of Tuesday and it will be available in digital format in the country’s official media.

News that this document would start being distributed came on Monday night on the governments Evening News program, after two days of a national seminar about the consultation process, which involved the attendance of over 280 representatives from state bodies and the Communist Party elite in every province.

The curtain rises to give way to a new phase where Cuban citizens can be involved in crucial decisions about their rights and wishes for the future of the country, but this will all depend on people’s determination to convert these spaces into a debate that questions the system or whether they let this opportunity pass as if it were any other democratic drill without any real importance.

Thousands of meetings and pairs of moderations

Approved by the National Assembly of People’s Power last week, the Draft Constitution will be subjected to a civil consultation process between August 13th and November 15th. The consultation is set to begin on the anniversary of Fidel Castro’s birth (1926-2016).

The news report pointed out that there will be 135,000 consultation meetings at workplaces and educational centers, in the community and outside. Consultations will be led by about 7600 appointed pairs of moderators, who will be prepared to carry out this role in every town.

Ever since Tuesday this week, 600,000 copies of the Draft Constitution are being sold for one Cuban peso (0.05 usd).

The document will also be available on the National Assembly of People’s Power website and in the government’s main press.

No longer aspiring to communism

The draft includes the Communist Party’s superiority as the main leading force in society and the State, although it doesn’t mention “the progress towards a Communist society” as a goal in this version, which was included in controversial Article 5 of the Constitution that was approved in 1976. National Assembly debates about the draft made it clear that several legislators had insisted on maintaining this “Communist aspiration”, but it wasn’t included in the final draft.

The concept of “Socialist State of Law” has been added, new forms of property have been recognized (including private property) and the principle of “effective citizenship” has been established which essentially means that Cubans won’t be able to use foreign citizenship in national territory.

The Draft Constitution has received harsh criticism from Cuba’s exile community. Opposition in Miami against the Cuban government have launched a Code of rights and freedoms which has been supported by associations of citizens in exile and dissidents in Cuba. The document considers the Draft Constitution to be a farce because it prevents any real changes being made to the political system and it limits citizens’ basic freedoms.

The exile community wants the Cuban population to have knowledge about this code, while they are discussing the draft constitution throughout the entire country.

When this process will end still remains unclear, but the next period of National Assembly plenary sessions, in December, will at least make the initial results of the consultation known, as well as the immediate steps to follow that are needed to approve Cuban Socialism’ new Constitution.

The 30-page document is already out on the street and can be read in full HERE.