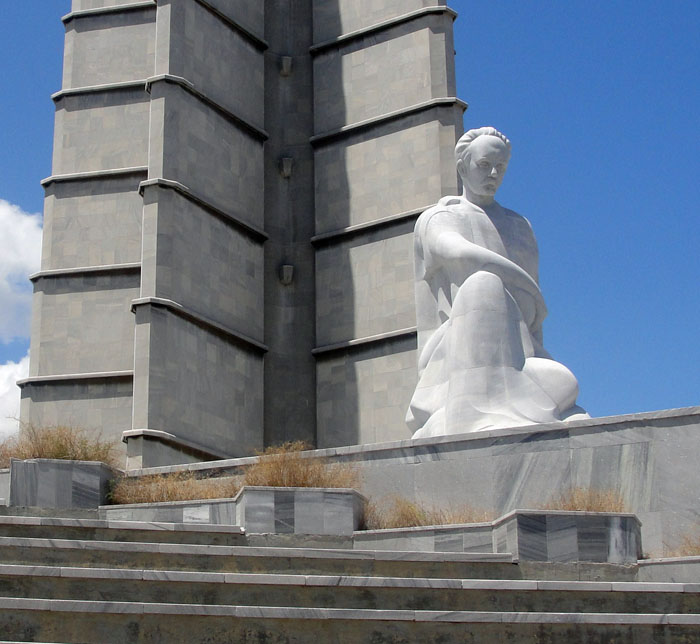 HAVANA TIMES, June 12 — Coming from modest beginnings, but possessing an encyclopedic mind, Jose Marti was a poet, writer, journalist, and translator, a teacher of teachers, an active advocate of independence and a tireless fighter against all forms of injustice.

Cuba’s apostle conveyed to us a host of ideas, many of which are used in sayings such as:

• “The homeland is an altar, not a pedestal”

• “There are two types of people: those who love and create, and those who hate and destroy”;

• “The indispensable friendship between Cuba and the United States requires Cubans to continuously demonstrate their capacity for creating, organizing, uniting, understanding freedom and defending it, to master the language and habits of the north with greater ease and speed than those of the north in other people’s civilizations.”

Given what he means to all Cubans as a spiritual guide who casts his light and wisdom, the Jose Marti Memorial was erected.

The story of this shrine dates back to 1926, when JCN Forestier presented a project that was located in the future geographical center of the city on the “Loma de los Catalanes” (Catalan Hill). On this incline was also located the city’s “Centro Civico” (the area now called Revolution Square), where in 1937 the main commission involved in the construction of a monument to Marti convened the first Pan-American competition for the monument’s design.

Additional competitions were held in 1939 and 1940, but it wasn’t until 1943 that of the three awards granted, selections were made of the statue designed by sculptor Juan Jose Sicre and the master plan by Enrique Luis Varela (a personal friend of President Batista).

In 1951, the demolition of the Monserrat Hermitage began in the selected area, the Loma de los Catalans, to allow the beginning of construction.

In 1952, after having re-taken power in a coup, Fulgencio Batista decided to begin the construction of the monument. Through a presidential decree a national commission was constituted that established that one day of workers’ pay would go to financing the monument, editions of stamps honoring Jose Marti would be sold, taxes would be increased and even activities in schools would be carried out to generate funds for the plaza’s development.

Work on the monument began in 1953 and was completed for the most part in 1958, though some exterior detailing remained outstanding.

As an architectural monument it uses the star of our flag as a symbol. Sited at an elevation 30 meters above sea level, the monument is made up of a tower in the shape of a five-pointed star as it rises to a height of 109 meters (358 feet). Its top floor is an enclosed observation deck, the highest point in Havana, which offers a panoramic view of the city. In front of the towering structure rests the 18 meter tall sculpture of Marti in a seated position.

The marble used for the construction was extracted from the Island of Youth. Inside the tower is a Venetian ceramic mural by the Cuban artist Enrique Caravia. On it are written 89 quotes by Jose Marti, with the letters on the mural and its columns laminated in gold.

The Marti museum consists of five rooms: three permanent ones, one temporary exhibition hall and a room for ceremonies.

Room 1 presents an overview of Marti’s life from his birth until his participation in the Monetary Conference in the United States in 1891. This exhibits Marti’s relationship with politicians, his work as a writer, and especially his pedagogic activity. Letters and drawings by him call attention to his self-portrait, which he modeled after his idol, the Chac-Mol (a type of Pre-Columbian Mesoamerican stone statue).

Room 2 exhibits the works of Marti in the preparation of the “Necessary War.” In it appear copies of the Patria newspaper, the by-laws and articles of incorporation of the Cuban Revolutionary Party (founded by him in Tampa, Florida), photos, maps showing us the activities of Marti in organizing for the war, and the Manifesto of Montecristi. There are also letters that are considered literary, pedagogic and family testaments.

This room includes photos of the obelisk erected in the place where “the Apostle” fell in the Battle of Dos Rios; pictures of his mausoleum at the Santa Ifigenia Cemetery (where a ray of sunlight always falls on his flower-covered and flag-draped urn, just as he expressed in his Versos Sencillos) and a fragment of the unfinished letter to his friend Manuel Mercado – the writing that’s considered his political testament.

Room 3 is dedicated to the history of the construction of the monument and Revolution Square, as well as of the most important events that have taken place there. Shown here is a collection of those coins that commemorate the figure of Marti and the square.

In the temporary exhibition room one can find displays marking the anniversary of Jose Marti’s death in battle on May 19, 1895.

For anyone interested in learning about aspects of Cuba’s most representative person, it is absolutely indispensable to approach the life and work of Jose Marti.

One thought on “The Jose Marti Memorial”