HAVANA TIMES — When the aerial photos of Cuba taken by Lithuanian Marius Jovaisa began to be published on the Internet, we saw more than one expression of wounded, nationalist pride bemoaning the fact a foreigner had come along and captured those images before Cubans could.

But Jovaisa’s status as a foreigner played a very small role in this feat, which required five years of his life, spending one million dollars, putting his patience to the test and even an interrogation by Cuban authorities on suspicion of espionage.

The secret to the success of this initiative – which anyone familiar with the workings of Cuban institutions would dismiss as impossible – is to be found in the photographer’s athletic background. The obsessive and perseverant attitude he developed as a triathlon contestant – not being blonde or having been born in Europe – was what allowed him to master the “extreme sport” of pitching any unusual idea to Cuban institutions and negotiating the precipices of the island’s bureaucracy.

“I have always been attracted to adrenaline sports,” Jovaisa told OnCuba in an interview conducted over the Internet. “I’ve done paragliding, skydiving, bungee jumping, wake boarding, snowboarding and surfing. That’s how I came to be interested in aerial photography some 12 years ago, because it combined those interests with my passion for photography.”

In 2006, Marius published Unseen Lithuania, his first collection of photos of his native country, a book which became a best-seller. It was followed by his first international experience, Hevenly Belize (2008). 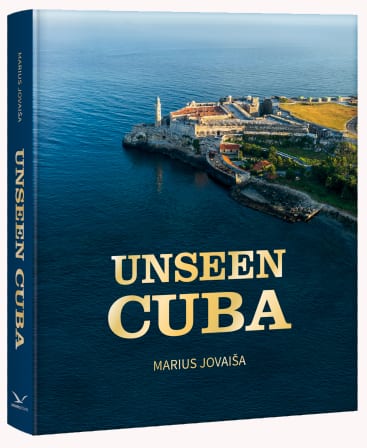 “After publishing those two books I started to think about which country I would do next,” he explained. “I realized no one had done anything similar in Cuba, because of the country’s political secrecy and the technical difficulties involved, and I thought that becoming the first person to achieve something like that on the planet would be great. There was also the fact Cuba is world-famous and I knew people in many countries would be interested in the book.”

Jovaisa arrived in Cuba for the first time in 2010. From that trip, he recalls that the Cubans he came in contact with thought it that it would take a miracle for someone – Cuban or foreign – to secure permission to do what he wanted: fly over the island at a low altitude to take pictures of the terrain. It was the start of a five-year process involving meetings, letters, requests, explanations, waiting and uncertainty.

“I went back to Cuba many times, approaching every imaginable ministry, institution, foundation and art association. I organized seminars and presentations and even an exhibition of my Lithuania photographs at an art gallery in Havana. I donated dozens of my previous books and finally convinced the Ministry of Culture to support my project and to become my official supervisor,” he said.

While waiting for official permits, he ordered an ultra-light XT-912, similar to the one he had used in previous projects, from an Australian company named Airborne.

The equipment took two months to arrive from Australia (a process further complicated by the fact it could not pass through a US port on its way to Cuba). Several pieces rusted en route because of the humidity, and things went from bad to worse when the equipment was retained by customs an additional two months. In order to assemble and test it he had to bring over a pilot from Lithuania and secure an official certification for him.

“I felt desperate and wanted to abandon the whole idea many a time,” he said, “mostly during the first two years when I still hadn’t started taking photos. Spending so much time and money without the slightest assurance that you will ultimately succeed is frustration.”

“On top of that, I was busy with my other projects and my growing family, so there were times I would say to myself: ‘The hell with all this! I’m financing everything, all I’m asking for is for a few signed papers and they still take forever!’”

“As I spent more and more of my time and energy and went deeper and deeper into this endeavor, I didn’t want to leave it without a sense of accomplishment. It’s like competing in a triathlon – never give up!”

In June of 2012, two years after first requesting permission, Jovaisa managed to make his first test flight, from Colon a town in Matanzas, some 180 kilometers from Havana.

Jovaisa took the photos from the passenger seat located behind the pilot. “It’s hard to take those pictures because the cables and wings are in the way,” he explains in his website. “But, with plenty of practice, I found the way to do it. I had more than 100 hours of experience using this type of equipment in Hawaii, Belize, Australia, Lithuania, Italy and other places.”

According to Jovaisa, aviation authorities in all of these countries treat these air vessels as mere experimental contraptions and there aren’t many more requirements for their pilots than would apply to the owner of a motorcycle. In Cuba, however, they treated it as though it were a “Boeing plane”: he was asked to record all flights, present the flight plan the day before, carry a radar and transponder, have a mechanic in his team and regularly inspect the fuel to ensure it contained no water.

They gave him a map showing the areas he could fly over and take pictures of. The map did not include any city in the country. He had to appeal and insist on his interest in flying over at least Santiago de Cuba, Havana and Camaguey. The reply was positive, but Havana was still off limits.

“They told me to not even dream of flying over Havana, but I finally convinced them, he said. “Not only that, I didn’t even need to use a helicopter. They let me fly over a city of two million people in an ultralight. That wouldn’t have been possible anywhere else in the world.”

The photo expedition began in Varadero and moved east along Cuba’s northern coast, till reaching Guantanamo, where Jovaisa headed back to Havana and continued towards Pinar del Rio.

Difficulties presented themselves during this last stage of the project as well. Jovaisa and his pilot had to deal with bad weather, expired permits that had to be renewed, additional expenses and more paperwork. They had to wait so long that some of the institutions that had granted the permits no longer existed and the officials involved weren’t the same, such that the photography project had been forgotten by some, as though it had never existed.

Near the end of their field work, they were intercepted and interrogated by officials from the Ministry of the Interior who had received information about a foreign spy who was taken aerial pictures. Though the situation was cleared up, the suspicion and rumors that immediately spread came to interfere with the renewal of the permits.

Flying over the whole of Cuba took two years, for, in addition to wanting to take pictures during different seasons, Jovaisa had a very limited window of time in which to take his pictures. He needed the yellowish or reddish light of dawn or dusk, which only last an hour or so. “After that time, the sun’s way too high in the sky and far too intense. Shadows disappear and everything looks like a map,” he explained.

They flew at an average altitude of 300 feet, from an hour to an hour and a half. The highest they flew was a little over 6,500 feet, when they flew over the Turquino peak, Cuba’s highest mountain.

When asked what his favorite region in the country was, Jovaisa replied he could not choose just one. “The amazing views of Baracoa and its surroundings became imprinted in my mind. I liked Trinidad and Playa Ancon in the country’s south-central region. Viñales is also among my favorites. Another incredibly beautiful place is Cayerias del Norte, east of Varadero, where you find Cayo Las Brujas, Cayo Santa Maria and others.”

The book has been on sale at his website, where the entire story behind the project can also be read. But in Cuba, where there’s naturally an interested public, people cannot make online purchases and the price of these opulent volumes is beyond the possibilities of average wage-earners. So I ask Jovaisa about the 500 copies he promised the country.

“After I had taken all of the pictures I sent medium-sized versions of these to Cuban officials, and it took them several months to review them. During a meeting, I was told that all was well and that I could continue.”

“But some time later, when the books was already being printed, they sent me a big list of photos I was not allowed to print. They didn’t explain the reasons. It was too late to change anything and I think that hurt my relationship with the Cuban government. I sent them a copy of the printed book and they never replied. My plan is to visit them in September and try to get past this misunderstanding. That is the reason I haven’t sent them the 500 copies I promised.”

“My dream is to organize a series of exhibitions and presentations in all major Cuban cities,” he said. “My plan is to combine this with a cycling tour to start in Havana and move east, so that part of my team can take part in it and the other can follow us in vehicles. This is not currently possible because I first need to re-establish relations with the Ministry of Culture and other institutions, but I hope to be able to do it in September.”

“As to whether I would do this again or not, it’s hard to say, because now I have more kids, four in total. When I started the project in 2010, we only had two and it was easier to take on something as long-term and complicated as this. But, when I close my eyes and run through the images of this amazing country and relive the fantastic experiences of flying and traveling with the Cuban team, the answer is a definite yes!”

15 thoughts on “The Man Behind “Unseen Cuba””