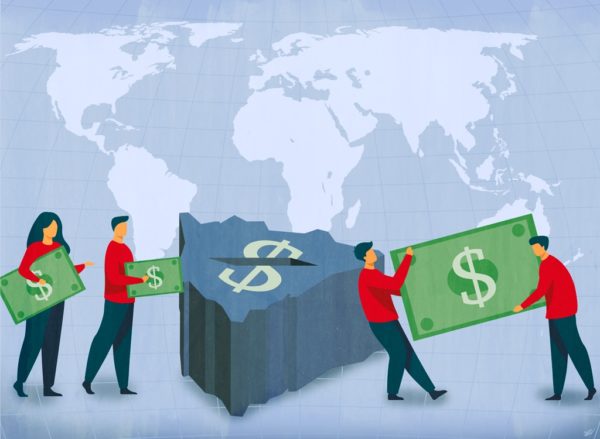 Nicaraguans outside the country work as many as four different jobs, in order to send money to family members affected by the three years of economic crisis.

HAVANA TIMES – Mildred Duarte, 31, is exhausted. She wishes she had more hours of rest in the week. However, that’s “impossible” for her, since her daily workday lasts at least ten hours, split between four different jobs. She cleans houses in Costa Rica, in order to pull together the 250 dollars she sends each month to her parents in La Conquista, in Nicaragua’s Carazo department.

Duarte left for Costa Rica 13 years ago, seeking better opportunities for work and personal growth. She formed a family there,’ and graduated as an accounting clerk. However, since arriving in Costa Rica she’s only been able to find jobs as a cleaning woman. She began working at this, initially sending “occasional help” to the couple who raised her, who she considers her parents.

In the last two years, she explains, she’s had to convert that occasional assistance to a monthly remittance. Her father suffered a stroke and could no longer work driving a taxi.  Her mother’s earnings from selling homemade sweets weren’t enough to cover the household expenses.

“A lot of the time it’s hard, because there are times that my tired body says: ‘No more!’ But I’m driven to keep going, out of love for my adoptive parents. They looked after me, and now that they’re elderly, it’s my turn to look after them. I’m aware that they’d be going without a lot of the things they need, if it weren’t for the money I send each month,” Mildred affirms.

The Nicaraguan explains that her monthly income comes to over 500 dollars. She divides this into money for her expenses in Costa Rica, and money she sends to her family in Nicaragua.

Remittances from Costa Rica totaled 64.7 million dollars in the second trimester of 2021, according to Nicaragua’s Central Bank (BCN). “This showed a year-to-year growth of 1.6%, following decreases in previous trimesters.”

The most recent report from the BCN sets the average remittance from Costa Rica up 0.6% over the average for 2020.

Data from the Central Bank also reveals a generally “upward tendency” in remittances during the second trimester of 2021. A total of 529.8 million dollars were received from all sources during those three months. That’s 93.7 million (21.5%) more than the same period in 2020.

In the first six months of 2021 alone, remittances totaled over a billion dollars, a year-to year increase of 19.7%.

“It’s worth it, if it means my family doesn’t go hungry”

Like Mildred in Costa Rica, Juan [not his real name] “breaks his back” to send weekly remittances from the US to his family. The Nicaraguan, a photographer with 15 years of experience, came to the US in February of 2020, after his small photography business collapsed in the context of the economic crisis in Nicaragua.

Juan asked Confidencial not to use his real name, because his immigration status in the United States hasn’t been regularized. He entered the US legally, with a tourist visa. At the time, he was planning to stay only for the allowed six-month period. He was working under the table with some US residents he knew, and he planned to get together some money, then return to Nicaragua and set up a business.

However, then came the pandemic. Its advance across the US caused his stay to be prolonged: twice his flight home was suspended. In August of 2020, he had to pay more than $400 to extend his visa. He’s still awaiting some resolution from the immigration authorities.

The Nicaraguan states that in the year and a half he’s been in the United States, he never stopped working, despite the pandemic. He also never stopped sending money to his wife and son who live in Nicaragua. During the first months, he says, he worked as a painter’s helper and could only afford to send 150 dollars a week. Later, he managed to hold down two jobs at once – one delivering furniture, and another at a gas station, in charge of the cash register and the cold storage. That way, he was able to increase his family contribution to 400 dollars a week.

“For three months, I kept up the pace with two jobs. There was even a period when I worked overtime. I no longer got any rest, and my body resented it. I practically fell asleep on my feet, without even realizing it. That’s when I said: ‘That’s as far as I can go’, and I cut back to just one of the two jobs.”

Juan is currently working remodeling apartments and houses. He earns enough at this job to send $250 dollars home each week. Since his immigration papers aren’t in order, friends and acquaintances do him the favor of depositing the money he collects, for transfer into his wife’s bank account.

For her part, Juan’s wife recalls that they went through hard times in 2019, when neither of them had steady work. When the photography business failed, they had to make the decision for Juan to travel, despite the risks of working illegally. They wanted to save some money, pay off their debts and reinvent themselves with a new business.

The remittance that Juan has sent every week for a year and a half has allowed his wife to pay off their debts, and to cover food, utilities, and tuition for their nine year old son. She’s also made improvements to their house in Ciudad Sandino, and has invested in a small business selling perfumes and cosmetics.

“This is all a risk, but it’s been worth it, because my family hasn’t gone hungry,” Juan stressed.

The average remittance sent to Nicaragua from the United States this year rose 11.9% over the average sum sent in 2020. In addition, there’ve been 13.6% more transactions.

As in Costa Rica and the U.S., the efforts of thousands of Nicaraguan migrants in Spain translated into an increase in money sent from there in the second trimester of 2021. Remittances from Spain for that trimester reached a total of 75.6 million dollars, a year-to-year growth of 20.6%. Up through June, remittances from Spain have totaled $152.8 million dollars, 26.9% more than the same period in 2020.

Nicaraguan Marlon Mendoza is one of those who “religiously” sends money home to family. He’s still unmarried and has been living in Spain for over 20 years. He studied Business Administration there and works in his field. For twelve years he has sent remittances every month to support his family in Granada.

Marlon began sending money home over a decade ago, but it wasn’t until two years ago that he became more consistent in his remittances. That’s when an uncle, aged 62, fell ill. Also, with the socio-political crisis, both his brother and sister-in-law were left jobless, with two daughters to support. In response, he decided to set a goal of 600 euros (just over US $700) that he sends home monthly to support them.

According to the Nicaraguan Central Bank, the average amount sent from Spain increased by 5.5% over 2020. The bank also noted a 20.3% rise in the number of transactions.

Mendoza emphasized that even with a profession and a good job, it still takes effort to send money to Nicaragua. In addition to having to work more hours, living in Spain “isn’t cheap”.

“It’s an effort you make with all good will. I don’t know what my brother and my uncle would do without my help, with no way to find work there in Nicaragua. I’m the only one that can help them, and I’m not going to leave it all in God’s hands,” he asserted.

Marlon’s brother in Nicaragua preferred not to give his name, due to the situation in the country. He confirmed, though, that with the help of his family, especially his brother, he’s managed to survive his unemployment, together with his wife and daughters.

Before losing his job, Marlon’s brother worked placing dental implants. His wife taught in a private school. During the two years he’s been jobless, he’s tried to get by with a small food stall. Nonetheless, the economic crisis that has engulfed the country for the past three years, added to the COVID-19 pandemic, has affected them. Sales haven’t been good enough to cover the family’s expenses.

They use the money Marlon Mendoza sends to pay for water, lights, internet service, food, the girls’ tuition and school supplies. In addition, they buy the medicine for their 62-year-old uncle, who’s diabetic. He also mentioned that they use the money to pay the taxes on the family house and on the cemetery lot they own in the old Granada cemetery.

One thought on “The Sacrifices of Nicaraguans Abroad Fuel Increased Remittances”