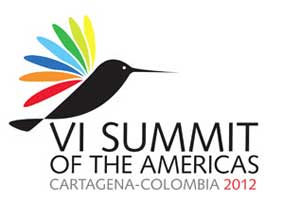 HAVANA TIMES, April 15 — A half century of attempts from Washington to bring down the Castro government in Cuba through an economic embargo, travel ban and diplomatic isolation is under attack from friends and foes alike at the VI Summit of the Americas in Cartagena, Colombia.

Juan Manuel Santos, the president of Colombia, Washington’s closest ally in South America, started the siege of US foreign policy on Saturday by stating in his opening speech:

“Isolation, the embargo, indifference, turning away, have all already shown their ineffectiveness. In today’s world, that’s not a justifiable path. It’s an anachronism that ties us to the era of the Cold War that was overcome decades ago.”

Santos told his fellow leaders: “It’s time to get beyond the paralysis caused by ideological stubbornness.” He added that Cuba is one example of “the consequences of not overcoming the paradigms of the past, of the absence of bridges and creativity.”

Both left-leaning and conservative-run nations are pushing for Cuba to be included in the next summit, reported the US government’s Voice of America.

The presidents of Ecuador, Rafael Correa, and Nicaragua, Daniel Ortega, decided to boycott the summit over the exclusion of Cuba. Venezuelan president, Hugo Chavez and Haitian leader Michel Joseph Martelly are not attending for health reasons.

On Sunday, the Bolivarian Alliance of the Americas (ALBA) announced that it would not be participating in future summits as long as Cuba is excluded. The warning was signed by the eight ALBA governments: Antigua and Barbuda, Bolivia, Cuba, Dominica, Ecuador, Nicaragua, St. Vincent’s and the Grenadines and Venezuela.

According to the block, Cuba is an integral part of the Americas and “has the unconditional and unquestionable” right to participate in this forum, reported dpa news.

ALBA also demanded that Washington “immediately end” it economic blockade against Cuba and “begin a process of dialogue based on respect and the sovereignty and self determination of the Cuban people.”

For its part, the US has argued that Cuba is ineligible to attend “because it lacks democratic credentials and does not respect the human rights of the Cuban people,” noted VOA.

The other chief political issue of the summit is Argentina’s claim of soverignty over the Malvinas (Falkland) Islands. However no consensus is expected.

Uruguayan president, José Mujica, said he doesn’t expect to see the issues of Cuba or the Malvina Islands in the final document issued by the summit when it closes later Sunday.

Mujica added: “The two political issues [Cuba and the Malivinas] of the summit will in reality not be addressed in the final declaration,” reported TeleSur TV.

Bolivian president Evo Morales said that the summit will conclude on Sunday “without achieving a consensus and with Latin America and the Caribbean “in rebellion”.

“There is a rebellion in Latin American and the Caribbean against the United States over its opposition to the generalized demand of inclusion of Cuba in hemispheric forums and Argentina’s demand over its sovereignty over the Malvinas Islands,” added Morales.

Another controversial issue being discussed at the summit is drugs.

The US has sought to maintain its high-budget and high-causality drug war, while other countries including Colombia and Guatemala are urging a change in strategy that could include decriminalization or legalization of certain drugs.

While opposing the move, President Obama said he is open to “legitimate discussions”, whatever that means.

The other main themes of the summit are poverty and inequity, natural disasters, security, physical integration and access to new technologies, noted TeleSur.

Washington hopes to achieve greater access for its corporations to sell their products to growing markets while several of the Latin American and Caribbean attempt in varying degrees to defend their weaker national companies.

VOA noted that the US has lost influence in Latin America during the Obama administration as “the region has increased its economic ties “with emerging economies such as China and India.”

2 thoughts on “US Wall on Cuba Under Attack”