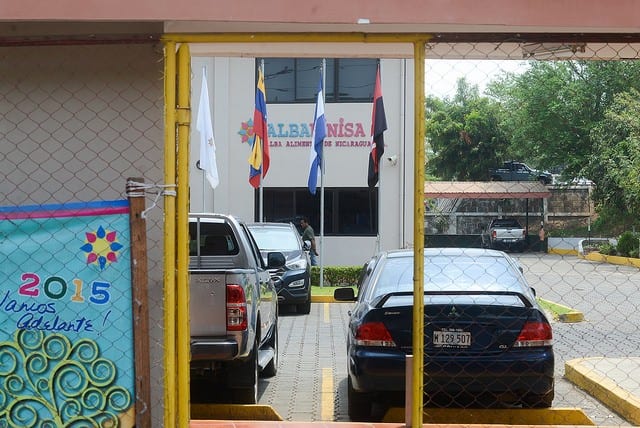 The Salvadoran Prosecutor’s Office recently raided Alba Petróleos as part of an investigation of 27 companies run by José Luis Merino, known as “Ramiro” in the FMLN

HAVANA TIMES – The immense fortune created by the combination of high oil prices and the copious extraction of black gold from Venezuelan subsoil laid the foundation for a “Bolivarian Joint Criminal Enterprise” (BJCE), according to a report signed by Douglas Farah and Caitlyn Yates, the president and investigator for IBI Consultants, LLC.

This BJCE, which the report’s authors say “is not a single entity, but rather a network of allied companies, regional structures, and historically linked individuals operating across the globe,” can only be broken up if it is “attacked from multiple points simultaneously.”

This message appears to have been heard in Washington’s highest circles, which sanctioned the government Venezuelan oil company (Pdvsa), as well as its subsidiaries in Nicaragua and more recently, in El Salvador.

According to the investigation carried out by Farah and Yates, the “joint criminal company” has used five different typologies to launder money in an operation that not only tried to corrupt diverse governments throughout the continent in order to politically isolate the United States, but also helped enrich some individuals at the top of this network.

The network used these five money laundering methods: fictitious oil sales, the systematic purchase of physical assets, illegal mining, phantom infrastructure projects and bank transfers  in which “between 10 billion and 28 billion dollars from 2007 and 2018, were transferred by 181 individuals and 176 companies in at least 26 countries.”

Although the report analyzes the movements, investments and promise of investments made by the Bolivarian Alliance for the Peoples of Our America (ALBA), in many of these countries the report focuses on what was actually carried out—or promised—in Nicaragua and El Salvador by ALBA Nicaragua, S.A. (Albanisa) and Alba Petróleos of El Salvador.

In the first money laundering typology described, the fictitious sale of oil, the authors argue that Venezuela claims to have exported far more resources than the actual quantities of oil sent to El Salvador y Nicaragua.

In the case of Alba Petróleos, the report states that despite the fact that this company “hardly received any oil from Pdvsa between 2010 and 2017,” the company’s accounts state that it received 1.2 billion dollars in revenue during this period. In the case of Nicaragua, the report concurs that Nicaragua received some oil, “but the Nicaraguan subsidiary received funds that far exceeded the imports,” totaling six billion dollars during this period.

“Most notably though, most of the projects that the oil companies claim to fund, do not physically exist or produce any goods or services,” the report emphasized, which is what Confidencial reported in the past.

The investigators also refer to phantom infrastructure projects that were used to justify the mobilization of enormous amounts of money, supposedly to fund public works, although little to no progress was made on these projects.

The poster-child project mentioned in this report is “The Supreme Dream of Bolivar”” refinery in Nicaragua for which the first ceremonial stone was laid on July 20, 2007. Over a decade and more than 500 million dollars later, this project continues to be a long and deep dream.

“Other large projects included contracts for oil drilling that never took place, the construction of a vaccination plant that never produced a vaccine, a solar panel factory that produced no panels, a water bottling company that produced no bottled water, and dozens of other enterprises throughout the region.”

In the report section on “bank transfers” the authors explain that “the abundance of resources passing through Pdvsa and ALBA forced the company to adopt solutions only available to states involved in criminal activities,” a line which reiterates that “Nicaragua created its own bank under state protection,” in reference to the currently sanctioned BanCorp.

In theory, ALBA Bank sent money to its account in a Panamanian branch of an Asian bank with branches in South Korea, Panama and Hong Kong, where the “funds were sanitized and layered into different accounts controlled by Ortega and his allies,” and from there they could be “wired anywhere in the world, including the United States.”

Even if the other two laundering typologies (illegal gold mining and the systematic purchase of physical assets) are not related to Nicaragua (nor El Salvador), the study’s authors assure that these practices allowed the network to launder between 1.2 and 2.4 billion dollars, as well as move over 70 tons (!) of gold, just in 2018.

The most recent action taken against this conglomerate used by the Bolivarian Alliance for the People of Our America (ALBA) to launder money through an enterprise network which they created, is the Salvadoran Prosecutor’s raid and search of 27 companies in the Alba Petróleos network, to investigate the possible crime of money laundering.

Farah and Yates’ report states that “José Luis Merino (El Salvador’s Deputy Minister of Foreign Affairs for Investment and Financial Development and former FMLN commander “Ramiro”) and a few other trusted front men and straw owners had set up a series of companies with interlocking ownership structures in Panama. From there, Alba Petro?leos and its related companies loaned eight Panamanian companies under their control at least $1.1 billion between 2007-2017. These companies in turn moved the money to financial safe havens in the Caribbean and Europe…Finally, they declared most of the debt unrecoverable.”

If in Nicaragua the sanctions against BanCorp and the threat of sanctions against Petronic’s gas station network forced the dissolution or modification of this money laundering scheme, the situation is not very different in El Salvador, where Alba Petróleos has been reporting losses in the millions of dollars for years.

Just like Petronic’s gas station network, the stations belonging to Alba Petróleos can no longer receive credit card payments after the local banking system closed their accounts in order to avoid US sanctions.