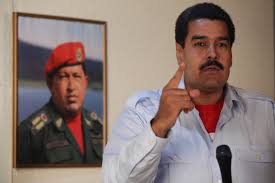 HAVANA TIMES – This Monday, March 5th, marks the fifth anniversary of the death of Hugo Chávez, and the Venezuela he left is unrecognizable, with an economy in collapse, never-ending political tension and growing poverty that has led millions to flee the country.

Even several prominent officials of Chávez’s almost 14-year government are no longer on board or are being persecuted by Maduro’s justice system, such as former Attorney General Luisa Ortega Díaz and the so-called oil czar, Rafael Ramirez.

What remains unchanged is the defiant discourse against the United States of the Chavez leadership. From the famous “smell of sulfur”, pronounced by Chavez in a speech at the United Nations against George W. Bush, Maduro went on to denounce as “supremacist” the administration of Donald Trump, who warned him that his patience is ending.

Chavez died as a result of cancer, according to the announcement made public by the then Vice President and now President Nicolas Maduro. The commander could not assume a third mandate.

At the time, Maduro said he had proof that the cancer was implanted via sophisticated technology by the CIA.

The year of his death, 2013, was precisely the last year in which the economy recorded a growth rate, while inflation began to take off, with a record of 56 percent.

The economy completed four years in decline in 2017 and inflation climbed up to 2,600 percent, according to calculations of the National Assembly (Congress), while part of the external debt is in selective default.

Shortages of basic food and hygiene products at markets, which was already beginning to show up in 2012, has gradually worsened alongside the growing inflation in the last five years.

Hyperinflation took hold in 2017, as Venezuela became a regional concern due to the wave of migrants, most of them headed to Colombia, Brazil, Argentina, Ecuador, Peru and Chile, as they flee the terrible economic conditions. However, Maduro denies there is a crisis.

Independent calculations estimate that between three and four million Venezuelans have left the country in this period.

The Government of Colombia, which carries the heaviest burden of the exodus, changed its policy of understanding towards Maduro and President Juan Manuel Santos now openly calls him a dictator.

“From Bogota, they try to teach us democracy, but their candidates are attacked and threatened.” While that is happening, in Caracas, our presidential candidates met in peace at the National Electoral Council (CNE) to sign guarantees, “Maduro replied in a tweet.

The current president inherited in 2013 a political scheme conceived by Chávez in the constitutional reforms of 1999, as well as part of the cabinet that accompanies him.

With a re-election plan in mind, Maduro installed a Constituent Assembly last year that has been shunned by dozens of countries. The 600+ member Assembly, totally dominated by Maduro supporters, approved decrees calling for the snap presidential elections, first for April 22 and then moved back to May 20, so they would have time to included regional and municipal elections.

In the electoral dispute, the main opposition coalition Mesa de Unidad Democrática (MUD) claimed a lack of guarantees in declining its participation and accuses Maduro of preparing a fraud.

Little by little the president has been changing the Chavez leadership, promoting young politicians such as the governors of Miranda, Hector Rodriguez, and of Falcón, Víctor Clark, as well as his controversial vice president Tareck El Aissami.

Maduro is pleased with the job by the acting attorney general and substitute of Ortega Díaz, Tarek William Saab, who has made Rafael Ramírez his main target in the fight against corruption in the state oil company PDVSA.

Ramírez accuses Maduro of having betrayed Chavez’s legacy. In several articles published on the Aporrea website, the former head of PDVSA and former ambassador to the United Nations reported that Maduro’s persecution stems from his desire to block Ramirez possible presidential candidacy.

In addition, he points to Maduro as being responsible for the economic “disaster”.

“It is insinuated that Chavez is to blame for this disaster, by ‘making wrong decisions’, by insisting on living with an oil price of 100 dollars a barrel and that it was very easy to govern like this.”

“Fools, Judas of the revolution,” Ramirez wrote in an article addressed to Maduro, who calls himself a son of Chavez.

The campaign for the re-election of Maduro includes refloating Chavez’s image, placing on the official television passages of his speeches, especially his last message to the country in December 2012, in which he asked to support Maduro with the vote.

The Government has prepared activities in homage to Chavez that will last 10 days, starting this Monday. They will begin with a mass in the so-called Cuartel de la Montaña (Mountain military headquarters), the military museum where Chavez’s remains rest.

The spokesman of the Comandante Hugo Chávez Foundation, Rafael Aguirre, said that the acts include talks, forums, workshops, exhibitions and artistic exhibitions.

“We are going to discuss the period of life from 1983 to 1989, that little is known about the commander: the human Chavez, the father Chavez, the uncle Chavez, and one of the aspects to highlight is his transit through the city of Elorza, his connection with the state of Apure (south of the country), where he experienced a form of management in conjunction with the communities, especially with the indigenous,” he explained.