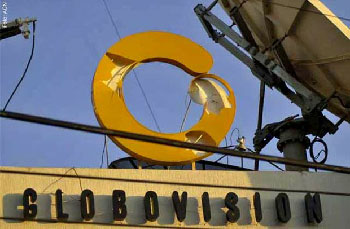 HAVANA TIMES —  The change in management at Venezuela’s Globovision TV channel and the decision of major Venezuelan television broadcasters to air a government campaign “for peace and life”, aimed at reducing the country’s high crime rate and instability, could mark the beginning of a new stage in the complicated relationship between Venezuela’s television and government, DPA commented.

Following a meeting with recently-elected President Nicolas Maduro held Wednesday, the new management of Globovision, Venezuela’s only television channel with an editorial stance that openly supports the opposition, agreed to take part in a government campaign against violence.

“Globovision will continue to be a news channel that airs news in a truthful and timely manner. Basically, what we’re going to do now is contribute to easing tensions around the country and work for peace,” said Juan Domingo Cordero, the network’s new president.

Journalist and deputy of the government’s United Socialist Party of Venezuela (PSUV) Earle Herrera applauded the joint effort, saying it is a commendable gesture from the media, which all too often “glorify” violence.

“Crime isn’t merely a reality, it is a way of perceiving the world, and that’s where many media play an important role (…) because some of them glorify crime,” the legislator explained.

As way of an example, Herrera referred to an incident in 2011, when, “in the course of a week, Globovision aired the events at the El Rodeo prison riot which left 19 dead some 200 times,” resulting in a fine of over two million dollars, imposed on the broadcaster for spreading panic among the population.

Carlos Correa, communications expert and executive director of the NGO “Espacio Público” (“Public Space”), recognizes that the media “could do a better job of covering violence” but adds that “the real issue is that the government wants to blame the media for the problem of violence.”

Former president of Venezuela Hugo Chavez (1999-2013) maintained a rather strained relationship with the country’s media. Initially, however, he was on cordial terms with the owners of the major networks.

“I have a very good relationship with the other (private) channels. The media should continue to be privately run. What we want is for them to broaden and deepen the scope of their news,” Chavez said during a television interview held before his election as president.

The parties, however, ended up signing a divorce before the honeymoon even started. After entering office in 1999, Chavez began to criticize the four major private networks (Venevision, RCTV, Televen and Globovision) and a good number of newspapers for adopting an editorial line openly in favor of the opposition.

Relations worsened over time and hit an all-time low in 2002, when most private networks and newspapers in Venezuela supported the opposition during the April events which resulted in Chavez’ 47-hour deposition in a military-civilian coup.

Herrera recalled that “there were networks whose aim was not to report on the events but to overthrow the government, and they ultimately failed.” Correa remarked that, at the time, “Venezuela’s media became propaganda machines” working for or against the government.

Eventually, Venevision and Televen agreed to change their editorial policies and to remove journalists who supported the opposition from their opinion shows, and the government renewed their broadcast license.

RCTV and Globovision, however, got the opposite treatment. In 2007, the government decided not to renew RCTV’s broadcast license, forcing it to shut down. The National Telecommunications Commission (Conatel) imposed several fines on Globivision, making the broadcaster financially unviable.

While the opposition denounced these measures as a strategy employed by Chavez to secure a “monopoly over communications”, government supporters viewed it as a process of “democratization” of the media.

Though Correa pointed out that the sale of Globovision “opens the door to its financial viability,” he also alerted the public to the possible political repercussions of this transaction. “The question is whether those who watch and take part in Globovision broadcasts will continue to feel that their opinions are reflected in its programs.”

The director of Espacio Publico is convinced that the change in Globovision’s management will result in “a less varied spectrum of information” from the political point of view.

Since his electoral victory on April 14 this year, a victory whose legitimacy the opposition refuses to acknowledge, Maduro has made the reduction of Venezuela’s high crime rate a priority and has sought an agreement with the media to reduce the number of programs with sexual content or violent images aired by these networks.

After its management met with Maduro, Venevision issued a communiqué in which it committed, “on the one hand, to continue to meet the demands of the public and, on the other, to continue airing campaigns and programs that contribute to democratic debates among viewers and the peaceful coexistence of Venezuelans.”

One thought on “Venezuelan TV at Crossroads with New Globovision Management”