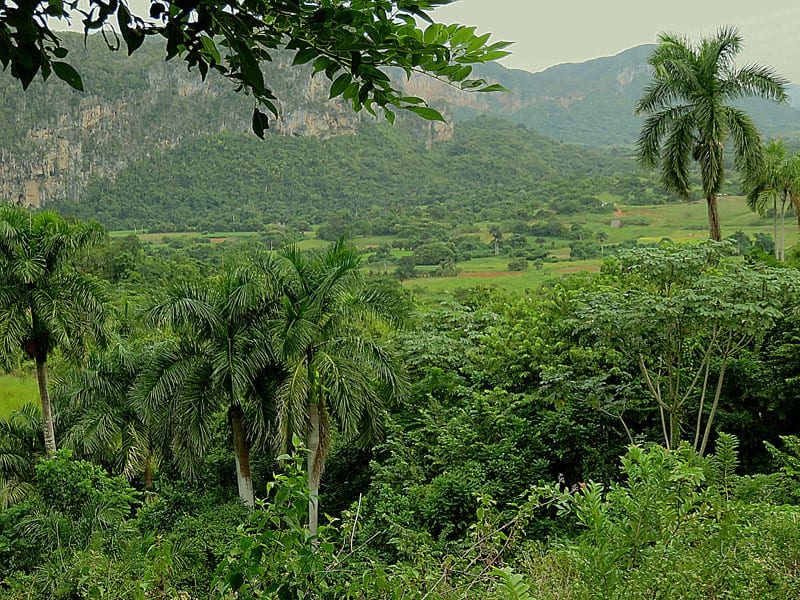 HAVANA TIMES — Viñales has become a tourist attraction par excellence for many people, where you can enjoy beautiful nature along with the comfort of a city. Living among the modernity which takes over this place more and more each day, there is a mogote where people live, a people who everybody wants to visit, but only a select few are able to understand them: the water-people.

“Nobody can save you from death,” Mario Rodriguez says, while offering me a delicious mango juice. “When it’s your time, it’s your time.” His words reveal his firm conviction and faith, a faith which has led him to lead a life without visits to the doctor.

Those of you who can remember the Cuban film, “Los dias del agua,” will know what I’m talking about. The film narrates events which took place in 1936 in Pinar del Rio, when a woman, Antonica Izquierdo, sees the Virgin and is told to get rid of all of the medicines she has, and that her son will only get better with water. This is how a faith began which continues today. If we left it at that, it would be a naive interpretation. Just as innocent as the story which today’s water-people tell.

“We don’t get involved in politics”, “we don’t have to go to school, we learn what we need to live at home and on the land; “I have never visited a doctor, nor have I ever needed one.”

These are some of the phrases which you can hear while enjoying a spectacular view of Vinales valley. Both Mario and his brother Antonio, their wives and parents have grown up with these teachings and are good men and women; moreover, they are very grown-up to try and go beyond everyday life.

When I decided to go up the hill to meet them, I decided to initiate a sincere conversation and to approach their lives with respect. Today, the hill where the water-people live is a tourist destination, foreigners go up to see exotic people who don’t take medicine and are healthy, who don’t go to school and are very well-educated, who don’t vote or have an ID card. Somthing like this is shocking in 21st century Cuba, but we can enter the context which gave birth to their faith by listening to the events they tell us of.

In the film, a journalist who had been following these events very closely asked himself if Cuban guajiros (country folk) weren’t looking in the figure of Antonica for the hope that they lost after so many years of lies, which had converted them into an apathetic and lifeless people. These words seem to have been taken from any conversation today.

The modern day water-people are a modest and hardworking people, they involve you with their friendly chitchat and repeat the story over and over again: a great commotion formed with Antonica, everybody wanted to be treated with the “miraculous of the cays,” and that troubled people. We had to leave, they kicked us out and sent us far away, that’s when we settled on this mountain. When we arrived, it was just forest. We had to cut down extremely tall trees in order to be able to make our houses, paths; that was in 1943 and we’ll never leave ever again.

The film depicts this event very well: Antonica, just by attending the poor, those who didn’t have access to healthcare, harshly criticized doctors and pharmacists back then, and all of the supposedly charitable institutions. It was only logical that the government would feel threatened and act accordingly: she was accused of being crazy, a criminal, etc.

Curiosity took me to the mountain top, I visited their homes, they offered me coffee; I spoke to her friends in the area, they acknowledged the humility of these people who value the land and work. I wanted to know whether they did any kind of ritual, if the water at that place had any special properties, the extent to which they are accepted or not by society and the government.

Life on this mountain has changed a lot, even though it might not seem so from down below. The last person who had “the manual” for the water’s medicinal use, died a few years ago. Now all that remains is what every old person can remember; and a powerful faith. In the film, Antonica repeats a phrase while she rubs the sacred liquid on sick people; however, Antonio and Mario assure me that neither of them do this. They don’t believe that the water here is the only healing one either: “water is life, my daughter, mineral water, this can’t harm anyone, on the contrary. Every time I feel something coming on, I go and cover myself in water. That’s how they healed my aunt’s asthma when she was a little girl.”

They told me about how they survive without an ID card, “just like you, everybody knows who we are and respects us. We even get a pension voucher book, without trouble, we also have the rations book. There were some incidents in the Revolution’s early years, people were arrested for not carrying their ID on them, you know, but then that stopped happening, they adapted to us.”

While they remember Antonica, like any sensible person, she got fed up with the politicians and in order to not compromise her vote, she tore her ID card into pieces; the others followed her example as they were convinced that it was the best thing to do. However, I was shocked to find out what the government’s reaction was. I thought about the pressure that is put on people in Havana to “vote early”, which is a way to set apart those who don’t go to the polls. Mario insists that they have never had problems with this.

Up the hill, I met Yosbani, a young man under 30, his yellow house looked like it had been taken out of a fairy tale. Yosbani isn’t a water-person anymore, he gave it up a few years ago after having an extremely high fever; his girlfriend took him to the doctor, they treated him and he got better. “My children do go to the doctor, and they will also go to school, things aren’t the way they are. You interact with people from town (Vinales) and get to know other things.”

New generations don’t get so excited about isolating themselves; faith isn’t enough to sustain them anymore. Many of them even leave the mountain. Others, like Yosbani, live in the town and keep their house here too, they sow their seeds and, every once in a while, they sit down to contemplate the beautiful valley in Viñales.