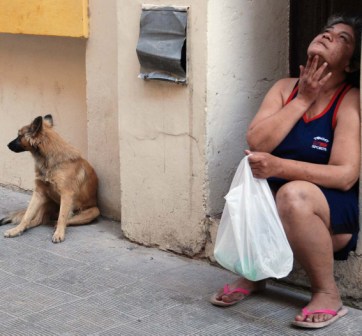 HAVANA TIMES, June 9 (IPS) – The topic of the gender violence has made it onto the agendas of many Cuban study centers, though it lacks a comprehensive approach that could contribute to more inclusive figures.

Mareleen Diaz Tenorio, with the Department of Family Studies of the Center of Psychological and Sociological Research (CIPS), says increasing numbers of people and institutions are approaching this problem from diverse fields.

“We have learned in the process that it’s important to have quantitative data about violence. This information is lacking and is vital in helping to visualize the problem, to sensitize people, including decision makers, Diaz Tenorio noted.

Concurring with her is Norma Vasallo, head of the Women’s Studies Department at the University of Havana. “What is still lacking is a national study with objective data, like the numbers of complaints and hospital reports, to have the closest possible idea of the magnitude of the problem in its most critical aspects; though we know that the number of incidents is greater in reality, it would still be a good start, Vasallo explained.

“From what I know, the only approach that was more or less comprehensive was done by the National Statistics Office (ONE) in the cities of Holguin and Cienfuegos, but it was part of a larger survey on sexual and reproductive health. At CIPS, we circulated a questionnaire in 2006 to some 500 people in six provinces of the country, but this is still less than what we consider should be done,” insisted Diaz Tenorio.

Although intra-family violence and violence between women are very old phenomena, their conceptualization and study is a historically recent occurrence. In research carried out within CIPS’s own Department of Family Studies (attached to the Ministry of Science, Technology and the Environment [CITMA]), it was found that violence worldwide only began to be studied as an object of analysis in the 18th century, and intra-family violence just a few decades ago.

Studies in Cuba began barely a decade ago

“To date, the knowledge and rigorous information that has been acquired on this phenomenon in most countries is extremely scarce, and on occasions practically nil, from the quantitative as well as the qualitative points of view,” details the study Intra-family Violence in Cuba, which contains only approximations of its characterization and general recommendations for social policy.

Studies on the subject began even more belatedly in Cuba, “hardly more than a decade ago,” though they have become more prevalent over the years, according to the CIPS report. “They have been carried out from the viewpoints of various specialties, but they have mainly had legal, medical, sociological and psychological focuses, noted the researcher.

In 1999, the Center of Women’s Studies of the Federation of Cuban Women (FMC) carried out a systematization of 20 works carried out since 1994 relative to violence in Cuba, and it confirmed that intra-family violence was the form most studied.

This systematization used as its basic information sources from the Institute of Legal Medicine and the FMC itself. It is considered by many specialists as a research precedent. Presently, in addition to those two centers and CIPS, interesting approaches to the issue can be found in institutions like the National Center for Sexual Education (CENESEX), the Ibero-American Center of the Elderly (CITED), the University of Havana (faculties of Philosophy and History, Psychology and Law) and the government’s statistics office.

Likewise, the ministries of Public Health and Education are conducting studies on violence. The creation in 1997 of the National Group for the Prevention and Treatment of Family Violence allowed the coordination of several actions to approach the issue in a systemic way from a multidisciplinary and multi-sectoral perspective. “The issues most dealt with were characterizations of the diverse forms of violence; the identification of victims and assailants; child abuse, the media and its impact on preventing and addressing the problem; the abuse of older adults, to a less degree; and several recommendations pertaining to social policies, detailed Diaz Tenorio.

At this time, there is also research on the island outside of the capital, mainly by women’s departments based in universities and higher educational institutes, and in Women and Family Guidance Centers located in all provinces. This increase in research initiatives was confirmed by Ana Melva Ramirez, from the Women, Family and the Society Center at the Superior Pedagogic Institute (ISP) in Holguin. “These types of studies have been gradually multiplying over the last few years,” she noted.

“In Holguin, such efforts began at the end of the 1990s and have been introduced in areas of higher education, fields of public health and in general education guidance orientation and diagnostic centers, among others,” said Ramirez.

Most of the research concurs that intra-family, as a form of social violence, is a phenomenon that in one form or another affects all societies, without distinction of social class, ethnic group, educational level or religious belief. Likewise, its presence in Cuba has been verified in all its manifestations, although the results of the studies point to the predominant presence of psychological violence.

Those results demonstrate that “intra-family violence does not take place in isolation, but in interaction with other important social phenomena,” specified the CIPS study.

Clotilde Proveyer Cervantes, with the Department of Sociology at the University of Havana said the findings of Cuban research reveal the presence of the gender component in female victimization.

In her article “Studies of Violence against Women Partners in Cuba: A Critical Reflection,” Proveyer asserts that “the offenses of which they are victims take place, for the most part, in relationships between couples and in domestic environments, with women acting as the aggressor in a smaller proportion – almost always as a response to the abuse they suffer, and with them receiving even crueler abuse by the man when he retaliates.”

Filling in the information gaps

However, specialists note that there are still other violence-related issues that demand thorough examination. Diaz Tenorio insists in that there are gaps “in research about the historical evolution and the anthropological characterization of violence in Cuba; in the evaluation of the economic, health care and labor costs; and in the study of the connection of violence with certain phenomena and social processes, including religious beliefs, psychological and physical disabilities, and others. There is also a lack of comparative assessments between territories and regions and inquiries into violence in rural areas, to only mention a few examples,” she added.

According to the CIPS findings, one of the few existing comparative studies concerning intra-family violence committed against women in Cuba and other countries was conducted by Dr. Proveyer in the late 1990s. That work verified “something that was suspected, but about which no direct information existed: This was that Cuban women, due to their level of social development, react more assertively in the face of intra-family violence than do their counterparts in other societies, even those in economically developed countries.

Although it cannot be said that this investigation constitutes the confirmation of that hypothesis in itself, it does contribute at least some elements in that direction, specified the CIPS study.

Norma Vasallo says that almost all issues linked to violence are insufficiently addressed. In that vein, the she highlighted the need to continue studies on the law and the legal environment in general. “Although changes have been made to the legislation, the public does not know about them, which undermines people’s ability to prevent and confront the problem. Greater knowledge could help, for example, at the time of reporting the crime, and it would also serve to deter the assailants,” she argues.

Diaz Tenorio is interested in deepening the objectives of research on violence. She also believes that it is necessary for the trial, implementation and evaluation of investigations presently being done, because they have to do with people’s lives. “That is one of the challenges. Another is to have clear recommendations that contribute to social policy and to monitor what it is done with them. Generating recommendations is not a common and frequent practice, and many times those that have been contributed have not been taken completely into account, she specified.

Tenorio’s concern is rooted not only in purely academic questions, but also in other essentially human ones, because violence can cause pain, damage and even death. “In questions of violence, like in any other issue in the social sciences, it is not possible to adopt a contemplative attitude; you cannot diagnose problems and then remain in the descriptive environment,” she concluded.