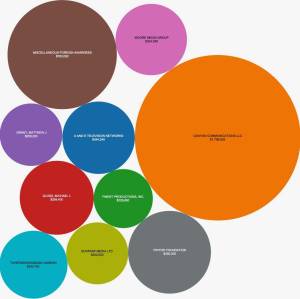 HAVANA TIMES – The Broadcasting Board of Governors is looking for a contractor to recruit, hire and manage a network of journalists throughout Cuba.
The contractor announcement states:

Stories regarding politics and economics are of particular interest as are those of the dissident movement.

The deadline for proposals is May 11.

The contractor will work from the date of the award to Oct. 31. The contract may be extended for four additional one-year periods if the BBG desires.

To be eligible for an award, companies must be registered with the government under NAICS code 512110, reserved for firms doing motion picture and video production.

Kline once ran a radio programming contest in Cuba without telling participants that it was funded by the U.S. government. The contest was aborted and no one was awarded any prizes after Cuban authorities arrested development worker Alan Gross in December 2009. (See “Taxpayer Contest Aborted“).

Earlier, Kline traveled to Cuba to test cell phones and other wireless devices for a State Department contractor. (See “The Other Alan Gross“).
The contractor that the BBG is now looking to hire would report to the Office of Cuba Broadcasting. The announcement states:

The work of the OCB centers around promoting freedom and democracy by providing objective information to the Cuban population that would otherwise be unavailable. OCB produces content that is relevant to the daily lives of Cubans, and the work of human rights activists, journalists, and dissidents.

The Contractor is responsible for (1) locating, recruiting, hiring, and managing a network of journalists (stringer reporters) in various cities in Cuba in order to provide regular local news and feature reports to OCB (quantity and specifications as described in the deliverables section), (2) managing a network of content distributors of OCB programming in the island, (3) providing a project manager to coordinate between the network on the island of Cuba and OCB, and (4) providing distribution of DVDs throughout Cuba.
The Contractor must ensure that the network contains journalists (stringer reporters) who are able to do the following:

Contractor must provide support to OCB in managing and expanding current network of content distributors of OCB programming across Cuba’s 15 provinces and the municipality of Isla de la Juventud by:

The stringers need not be full time employees of the Contractor (i.e. they can be freelancers) but the Contractor shall be solely responsible for all necessary paperwork and payments related to the employment and payment of said stringers, including taxes, tariffs, etc., as applicable.