The voice of the demonstrators, fed up after 100 days of repression.

The peaceful rebellion remains determined in the face of Ortega and Murillo’s killings. “For the dead, this struggle must continue.”

HAVANA TIMES – Arturo, an accounting student from Nicaragua’s National Autonomous University in Managua, arrived at the demonstration on Thursday in Managua with a graduation cap, dark glasses and a blue and white handkerchief to protect his identity. He was holding a yellow poster that said “Long live Monimbo!”  Arturo has been participating in protests against the regime of Daniel Ortega and Rosario Murillo “since the struggle began a hundred days ago. Three months, and we won’t rest until those two are gone,” he declared.

The young university student explained that the blue graduation cap was in homage to the memory of kids like Alvaro Conrado, who will never graduate from high school because they were killed by the National Police and the paramilitary groups. The message written on his poster refers to the indigenous neighborhood of Monimbo, whose barricades – which remained strong for more than 25 days – became a symbol of the resistance. These blockades were eventually dismantled by Daniel Ortega’s police and paramilitary forces earlier in the month.

“For them and for the rest of the people who’ve been killed, this struggle must go on. We can’t forget the blood of our brothers and sisters who have fallen at the hands of the paramilitaries. If we want to have a new Nicaragua, we have to take the power away from Daniel Ortega, Rosario Murillo and that mountain of functionaries who have done nothing but steal from the people,” the young man insisted.

Arturo joined hundreds of people who congregated on the underpass of the Centroamerica roundabout in the capital to participate in an artistic commemoration of the 100 days of demonstrations against the current regime, a regime that up until now has left a total of 295 dead, according to the latest report from the Inter-American Commission for Human Rights, soon to be updated.

The artistic protest gathering was originally scheduled for the Rubenia underpass, but due to a police siege involving at least 40 agents, the organizers decided to take the activity to another place. Beginning at one in the afternoon, hundreds enjoyed a musical presentation with the participation of singers like Gaby Baca, Mario Ruiz, Carlos and Luis Mejia Godoy, and other young musicians.

For five hours, the demonstrators blocked the streets that pass under the Centroamerica roundabout.  A truck served as an improvised stage, and hundreds of citizens gathered along those traffic lanes, with their blue and white flags and t-shirts referring to the hundred days of protest against the Ortega regime.

“Please, stop the killing. We don’t want any more bullets…we want freedom,” said Mario Ruiz a pop singer. “Thanks for leaving your fear at home – we need you in the street,” the Nicaraguan musician told the crowd.

Keeping the pressure on in the days to come 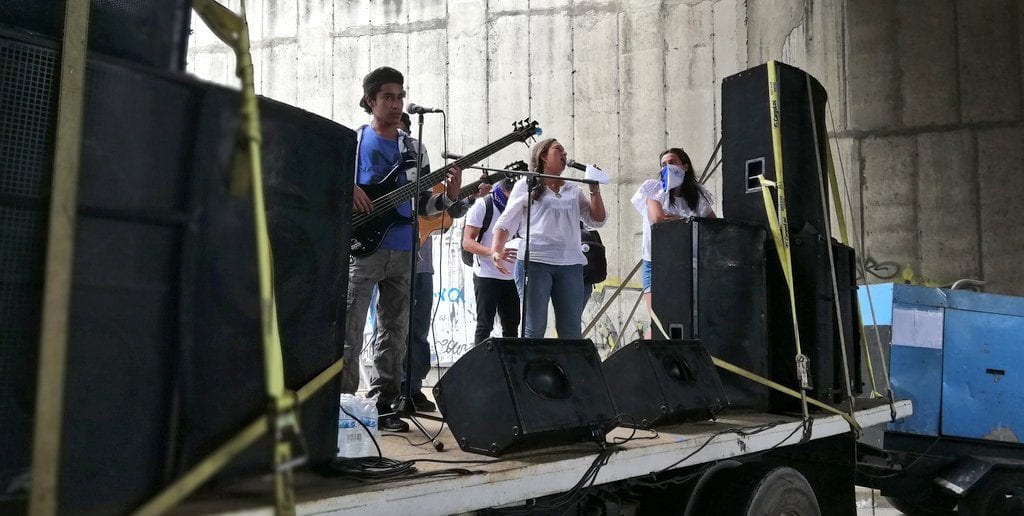 Before beginning the artistic event, Arianna Moraga, a student leader, offered some words to those who were gathered, mainly young university students. Moraga stated that despite the killings, arrests and the Ortega government’s doctrine of terror, they wouldn’t abandon the struggle for freedom in the country.

“We’ll keep mobilizing, we’ll keep standing up in peaceful protest, we’ll keep going out on the street to say that we’re not afraid, despite the bloodshed. We want and need a new Nicaragua,” the student leader insisted.

At one side of the stage, Raul Mendoza, a university student listened attentively to Moraga’s speech. When she finished, he clapped like the rest. Although he wasn’t holding a blue and white flag like the majority, he waved his hands in a sign of approval at the words coming out of the speakers.

“The people will resist, but we have to remain united. I’m not in the university, but I feel the pain of my brothers and sisters in the different universities – the UNAN, the UNI, the UNA – and in Masaya. We mustn’t surrender, we have to march, move, as we began doing one hundred days ago,” he said. 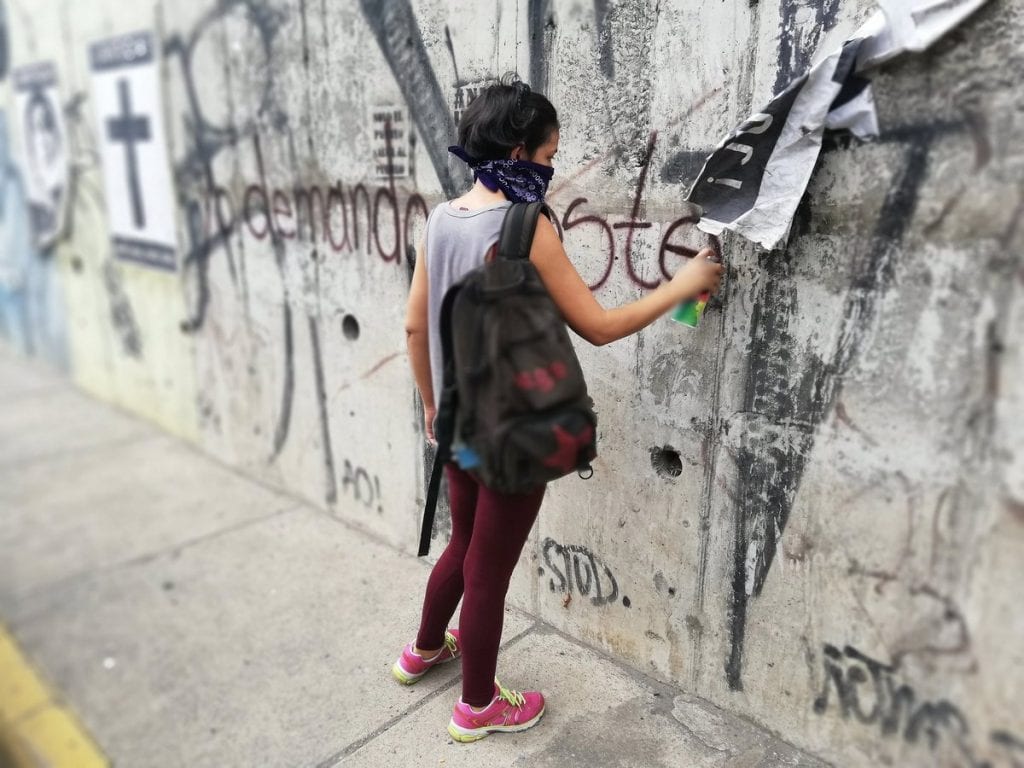 Mendoza affirmed that while he feels some representation from the members of the Civic Alliance, he believes that this group should plan another kind of measure to pressure the government of Daniel Ortega. “I understand that a total strike would lead to a lot of losses, but COSEP [organization of the large businesses] needs to put something into this from their pockets. It’s not only about having people die, but of mounting other forms of resistance as well.”

Regarding this, another student stated that the role of the Civic Alliance, “has been good up until now, but they have to put more pressure on.” In his opinion, if they weren’t going to have a general strike, they should “begin to use more fiscal disobedience on that assassin.”

“They [Civic Alliance representatives] need to learn to listen to the population. I know that they’ve already done so, but they must always take into consideration the ideas that come from the people. A hundred days have gone by and there are more to come but if we don’t unite more than we have up until now and exert more civic pressure, it’s going to be complicated,” he concluded.