HAVANA TIMES — I’ve had a pleasant, weekend routine with my son RJ for some months now.

“What are you going to do today?” one of RJ’s grandmothers asks him at the breakfast table.

“I’m going to the Parque de la Maestranza with my mom,” he answers without looking up from his plate of cereal. That’s how our day starts.

I go out with my kid either Saturday or Sunday. We’ve made a habit of going to the old town, a trip I consider both cheap and educational. Our day about town is divided into four parts: the bus, feeding pigeons, lunch and the park.

The bus: we go out at around ten or eleven. I prefer catching the #8, which comes around at about 10:30 in the morning, but I’ve learned not to beat myself up over public transportation when it’s a matter of leisure. If we get to the stop on time, we head directly to Old Havana’s Plaza de Armas on the number 8. If we go out a little later, we catch a different bus and transfer to the P5. RJ enjoys the trip immensely.

I assume he likes them because bus rides are a change in his daily routine. We walk everywhere during the week (to his kindergarten, the store, the bakery, the ration store). I also give him as much freedom as I can: I ask him what routes to choose, how to organize our trip, and I entrust him with getting us to our destination. That puts him over the moon. One has to see how he fills up with pride when I give him the bus fare and the serious look he gives the driver when he drops it in the fare-box. Also, RJ is still at an age when people are kind to him (women hold him in their arms, young people yield their seats to him, even in the ultra-violent context of Havana’s transportation system).

The pigeons: We never go out without a bag of rice grains or chick peas in our bags. When did the tradition of feeding pigeons in public places begin in Havana? I don’t know, but I can’t picture the different squares in the old town without pigeon-loving people going through the motions of this ritual.

Many people go to the Plaza de San Francisco because of its pigeons. The square is also a regular stopping point for fifteen-year-olds who have their pictures taken, in “period” garments, for their quinceañera albums. As for me, I can’t stand that sun-battered esplanade without a place one can sit down while the kids run around and police officers prowl the place. RJ and I go to the Plaza de Armas instead.

The Plaza de Armas is a little cooler place, thanks to the thick foliage of its aged trees. Surrounded by fountains, the statue of Carlos Manuel de Cespedes always strikes me as agreeable. Beset by booksellers, four museums, the provincial library, three eateries and the Santa Isabel hotel, the place is never empty. The pigeons there are well-fed thanks to the lunches of those who work in the area and children like RJ who enjoy watching them eat. The pigeons, who are happily devoid of the concept of dignity, never once turn down a free meal.

I sit down at a bench and enjoy my surroundings. Several booksellers came to work wearing the jerseys of their favorite soccer teams. At lunchtime, they gather at a corner of the park to debate about the World Cup. On the other end of the park, an old man is sitting next to the books and photographic paraphernalia of his kiosk. He explains the merits of an antique stills camera to a twenty-year-old (perhaps his grandson) and their conversation takes them back to the “remote” times when Germany was occupied by the United States, France, England and the Soviet Union. Two European-looking tourists approach them and join the debate about Germany’s historical vicissitudes. I get the sense they’re going to buy the camera, made in East Germany, excited by the conversation.

Lunch: There are two hard-currency – and very luxurious – restaurants and a cafeteria named Mundo Aborigen (“Aboriginal World”) by the Plaza de Armas. The latter is a small establishment, part of the Natural Sciences Museum (I assume they rent out the spot). They always have customers because of its excellent location, facing the Plaza, wedged between the Museum and Ruben Martinez Villena library. The prices are the same one comes across elsewhere in the city (a plate of spaghetti at 10 Cuban pesos), but the servings are generous and the waiters are quick and kind.

I think of Mundo Aborigen more as a restaurant than a cafeteria: in addition to the counter and soda fountain, they have five tables and the food is served on ceramic plates (complete with metal cutlery), not on disposable dishware. A locale of this nature would be referred to as a “diner” in the United States, I would venture to say.

I like for RJ to become experienced in ordering and waiting for his food while other people move about us immersed in their own businesses. Since “eating out” isn’t something one does regularly in Cuba, I think it’s important to teach one’s children to act with discretion and good table manners early on.

Other times, I’m a little short on cash and we take homemade lunches there: hard-boiled eggs, sandwiches and some juice. We throw together a picnic. The pigeons come up to us again. Hadn’t they stuffed themselves with rice fifteen minutes ago?

The park: after the body has been satisfied, it is time to feed the spirit. There are more than enough museums around the Plaza de Armas and on neighboring streets for RJ to choose from. The Natural Sciences Museum is a must. He makes a very brief stop to look at the butterflies or the sperm whale skull on display. We go straight to the children’s section, which has board games and small, desiccated animals he can touch. 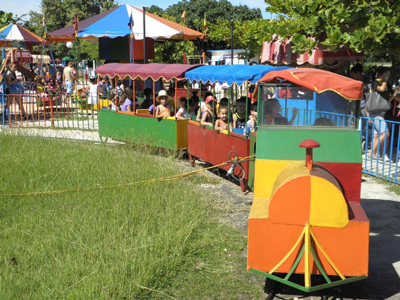 Then, we go down to the World Gallery, where indirect lighting and pre-recording roars bring to life a polar bear, orangutan and wolf. It took me months to convince RJ that none of the animals were alive. He is no longer afraid to go in, but he always repeats a spell to ward off crocodiles he learned from Dora the Explorer.

Another museum we often go to is the Naval History Museum located in the Castillo de la Fuerza. We count the sails, masts and flags on the ships there. I try to explain to him that these wooden vessels brought over poor and rich people, the great, great grandparents of those who now live in Cuba, and that they also took the gold and silver of the Americas on those ships.

Some interesting things I enjoy: the restored pottery is more interesting to him that the reproductions of chests filled with gold coins. The fact he knows what a plate is but does no comprehend the value assigned to precious metals must have a say in this.

We always end up at the Parque de la Maestranza – of course. Between the blow-up castle, electrically-operated games, carousel, train, boats, flying chairs and traditional entertainment (such as canals and seesaws), we can easily spend two hours there. RJ is almost five and well fed, so he is tireless: he can go through the park’s six canals several times without taking a rest. Another thing that fascinates him is the castles there: they have stairwells, ramps, bars and canals one can climb up or down through.

I limit myself to letting him know the basic rules: no fighting, stick up for yourself, no going down the toboggan head-first. I look for a shaded spot and leave him be. It’s his time, after all. I don’t understand people who take their children to parks wearing lacy garments, expensive costumes or shoes and then spend the entire day flustered as they watch the kids run around. How can anyone play at a park without sweating, getting dirt on one’s clothes or run around free as the wind? Parks are not fashion shows!

It’s nothing new. I remember my own childhood and the “correct” way one was expected to behave. Boring stuff!

To get back, we wait for the #8 at its first stop, at the mouth of the Havana Bay tunnel. I usually doze off before we get to Vedado and RJ wakes me up.

When I watch him sleep at night – he takes up almost the entire bed now – I am assailed by uncertainty. How long will our complicity, our promenades down Old Havana, last? At what age will RJ begin to prefer the company of his contemporaries and start seeing mine as “humiliating”? I imagine I have less than ten years before having to let him go. I hope I am able to read the signs, to let go of his hand without making too much of a fuss when it’s time for him to go his way. In the meantime, we have a good routine going, he and I.

One thought on “Weekend Routines in Havana”