HAVANA TIMES — Last week economist Richard Feinberg presented his latest monograph Soft Landing in Cuba? Emerging Entrepreneurs and Middle Classes (62 pages) published by the Brookings Institution, a think-tank in Washington, D.C., that looks at Cuba’s changing economic landscape in terms of the emergence of an entrepreneurial class. Feinberg demonstrates: “the old narrative —that Fidel and Raul Castro had to pass from the scene before real change could occur — has been discredited.”

The text is packed with surprising data, for those interested in facts, and colorful anecdotes, for those who only vicariously know Cuba due to the U.S. prohibition on travel. As expected, it offers both the Cuban and the U.S. government recommendations for ensuring that Cuba experiences a “soft landing.”

The reader is encouraged to dive right into the report, rather than rely on me to insufficiently summarize it.

I prefer to use my few lines to reckon a guess at the definition of soft landing in this text (which I believe is, in general, the most commonly expressed definition and aspiration for Cuba). From my reading, the landing strip is located in the palm of the invisible hand of the capitalist market. 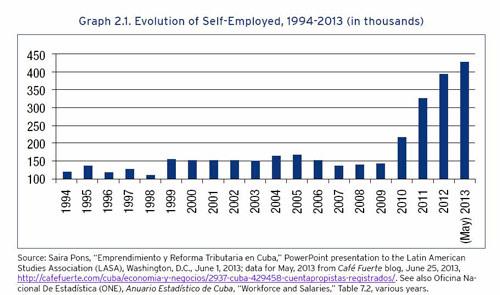 It is a Cuban economy that integrates weak State owned enterprises, with cooperatives, private enterprise, and international conglomerate participation and that encourages immense wealth accumulation, class stratification, worker exploitation, mass consumption and meager taxes to ensure some basic standards. That is, more “normal.

Feinberg presents practical steps for reaching this goal and a thoughtful look at where the process currently stands. He shows that the transformation is more advanced than one might think both objectively, with a 1% layer forming at the top, and in the attitudes of some Cubans, quoting one youth as saying, “we are no longer communists but consumerists.”  Warning: social, ethical, or environmental implications of such a transformation, and how these might be mitigated, receive only an obligatory one- sentence mention toward the end.

Images of the emerging economic order are vividly drawn throughout the report. In one chapter, it is noted that the monthly salary of a server at a private restaurant may be covered by the sale of one meal, presumably leaving enormous profits to the owner.

While that owner pays taxes, due to the mainly cash economy and uncomputerized state apparatus, revenues are grossly underreported and hence taxes are equally underpaid. It is not surprising then to find cuentapropistas complaining about the taxman hassling them about their books or even looking for bribes.

But how, on the same paltry state salary as other Cubans, did these new entrepreneurs acquire their start-up costs, which ranged from $7-36,000 USD among those in the report’s small sample? 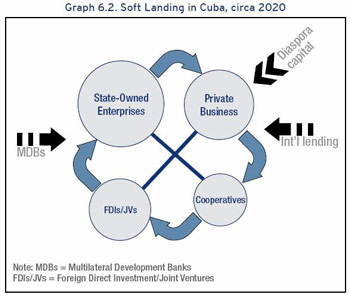 Nearly half of those surveyed had relied on unearned foreign capital. The rest had sold possessions or saved compensation earned in hard currency from tips and missions abroad in Venezuela for example (in contrast to the story told by the right-wing exiles who claim that Cubans providing services in Venezuela are slave labor).

So far, there are still some reigns on wealth accumulation.  For example, it is only legal to own two houses (when a festering complaint in Cuba is the lack of sufficient housing). But there is hope for Feinberg’s recommendation that the Cuban government reduce disincentives to business expansion. It is found in the recent legalization of landlords, who can now rent space to entrepreneurs who aspire to reach beyond their personal real estate.

Just imagine it. A restaurant, that pays its server a monthly salary equivalent to the sale of one meal, could multiply across the island. With the proliferating profits, the restaurateur may eventually enjoy some influence on government decision-making, perhaps even regarding tax laws, labor protections and environmental regulations. Hmmmm… sounds vaguely familiar…

The possible scenario makes imperative another recommendation, that is, to legalize professional self-employment, because that server will still be making more money than professionals in the state sector. Surely professionals have the right to join the newly-formed class of stuff collectors, and even sneak past the servant class a bit. Of course there must be stuff available to collect. Ooooooo, perhaps a Walmart!

However, not all those surveyed have such aspirations. Some, Feinberg explains, have only “primitive” household accumulation in mind. That is, they are content with supplementing their income in order to modestly improve their standard of living. Barbaric!

Some even continue to display a stubborn sense of “solidarity and community” as illustrated by the construction cooperative “Armando Mestre Martinez,” named after a martyr of the Revolution and chaired by a “National Hero of the Republic of Cuba,” which offers discounts to clients in Santiago de Cuba with less capacity to pay.

Some might say that I have wasted too much time on the “inside Cuba” details and, as a USian, I should have focused on the report’s recommendations for the U.S. government. 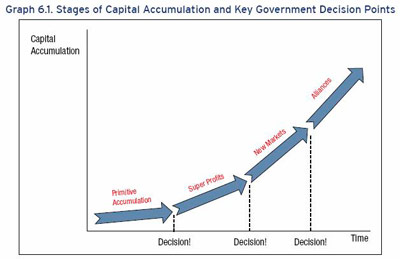 In a nutshell, Feinberg recommends that the U.S. abandon regime-change fantasies and instead take a suite of measures to support, encourage, influence and participate in building a prosperous and powerful non-state sector. He specifically leaves out any economic interaction with the State and even suggests a system for verifying that exchange is only taking place with private businesses. His suggestions are pragmatic, possible, and within the paradigm of most relevant decision-makers, making the report relevant and presumably impactful.

But preclude the establishment of a Walmart in Cuba as that would require Cuban government involvement…sorry.

Nevertheless, people around the world have shouted, in more than a dozen languages, one much simpler and sane recommendation: END THE EMBARGO.

20 thoughts on “What does a Soft Landing in Cuba look like?”