On the Brink of a Nuclear War: 55 Years after the Cuban Missile Crisis

HAVANA TIMES — The United States and Soviet Union were never so close to a nuclear face-off as they were in October 1962, when the US discovered Soviet missiles on the island.

“The decision to install missiles was the Soviets’ initiative to deter a US invasion,” Tomas Diez Acosta, a retired military man and the best expert on the “October Crisis” in Cuba, told dpa news.

On October 14, 1962, a US Air Force U-2 spy plane flew over Cuban territory and managed to take pictures of missile launching pads with enough range to destroy any city on this eastern coast of the US, from Miami to New York passing through Washington.

Two days later, President John F. Kennedy was informed about the situation alongside a small group of advisers who kept this a secret for a week. In order to win the battle, they needed to not lose their initiative and take the enemy by surprise.

“The purpose of these bases can be none other than to provide a nuclear strike capability against the Western Hemisphere,” Kennedy said on October 22nd in a national address from the Oval Office.

Other options were considered: political negotiations, attacks on selected Cuban targets, a naval blockade and military invasion. Finally, the head of the White House decided to implement a stringent naval blockade, that is to say, to put the island in “quarantine”.

Nearly a hundred US ships were deployed around Cuba and dozens of air force commands patrolled so as intercept Soviet shipments that could bring weapons to Cuba.

The objective was to win time so as to prevent a war that once started would end in a nuclear holocaust.

US intelligence services didn’t know that there were already over 40,000 Soviet militarymen deployed in Cuba, including thousands of soldiers who belonged to the powerful Soviet Strategic Missile Troops which had come to the island as part of “Operation Anadyr”.

The great problem that Cuban and Soviet officers had was to hide missiles that were 24 meters long.

“A misjudgment would have put us at war with each other,” recalls Tomas Diez, a researcher at the Cuban History Institute, who retired from the Cuban Army with the title of Lieutenant Colonel.

The tensest moments of the Cold War lasted a week. Both parties didn’t want a full-scale war but they couldn’t show themselves giving in to the “enemy”. On October 27th, a US air force U-2 spy plane was shot down in Cuba. The pilot died. Tensions reached their peak at that moment. 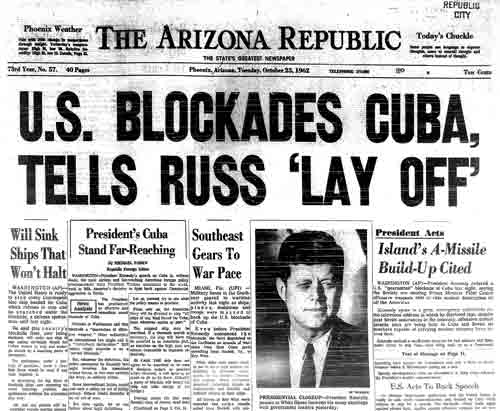 The solution reached, without Fidel Castro, was something that the Cuban government didn’t like at all and at political events, Cubans began to sing “Nikita, you fag, you don’t take away what you give.”

“Nikita Khrushchev’s behavior during the 1962 October Crisis really dealt a heavy blow to the image we Cuban people had of the Soviet leadership,” Juan Sanchez, former Cuban Ambassador and currently a professor at Cuba’s University of International Relations, told dpa.

The negotiation behind Cuban leaders’ backs “introduced into the Cuban leaders’ subconscience that it was impossible to completely entrust matters of our national security to our allies,” Sanchez said.

In spite of disagreements between both countries, they have remained two Communist allies for decades. “A historic moment was lost, but from that point on the Soviets used to supply us with arms for free, they were indebted to us,” Tomas Diez points out. However, the shadow of mistrust in the Soviet leadership remained.

“This feeling of uncertainty led us to come up with the doctrine of the war of all the people strategy, which has the defense of our sovereignty with our own forces at the heart of it,” notes Sanchez, who was a Cuban Ambassador in many Eastern European countries.

The following is a timeline of the key moments in the 1962 “Cuban Missile Crisis”.

October 14th: A US Air Force U-2 spy plane flies over the western part of the island and takes photos of Soviet missile launch pads.

October 15th: The US National Photographic Interpretation Center analyzes these photos and identifies ballistic missile parts. High-ranking officials are informed about this finding.

October 16th: US President John F. Kennedy is informed and creates a team, the Executive Committee of the National Security Council (ExComm), where technical aspects of the real danger that these Soviet missiles might pose and the possible responses that the US should adopt are analyzed.

October 20th: Kennedy discusses the best strategy to follow with his advisers. Defense secretary Robert McNamara defends an attack against Cuba, while the US’ UN Ambassador, Adlai Stevensor, considers offering to withdraw from the naval base at Guantanamo and to dismantle US missiles in Turkey. Kennedy decides to put Cuba in “quarantine” in order to stop Soviet ships from passing through.

October 21st: The US Strategic Air Command warns that an air attack would only destroy 90% of Soviet missiles on the island. Kennedy thinks about the repercussions that the remaining operative 10% could cause.

October 22nd: Kennedy gives a televised speech to the nation where he reveals the existence of missiles in Cuba and announces the naval blockade on the island.

October 23rd: Soviet Union leader Nikita Khrushchev states that US measures are a threat to peace and Moscow puts the Warsaw Pact on alert.

October 24th: Khrushchev claims that the Soviet Union is ready to sink US ships that try to intercept Soviet ships on their way to Cuba. Moscow proposes a summit to Kennedy in order to prevent a full-scale nuclear war. The United States activates DEFCON 2, the most severe alert state before war.

October 25th: The Cuban Missile Crisis is discussed by the United Nations Security Council, where the US ambassador shows photos of missile whose authenticity is denied by the Soviet representative.

October 26th: The Soviet Union (USSR) sends a message to the United States saying that it is willing to withdraw its missiles if Washington promises not to invade Cuba.

October 27th: A US U-2 spy plane is shot down in Cuban airspace. Kennedy orders that no reprisals are taken and sends a telegram to the Soviet Union guaranteeing that it won’t invade Cuba as long as the USSR dismantles its nuclear facilities on the island in exchange.

October 28th: Khrushchev announces the dismantlement of missile facilities in Cuba and Kennedy promises to end spy plane surveillance of the island to allow Soviet ships to pass through to the island. Washington also agrees to withdraw its missiles from Italy and Turkey, as well as not invading the island. Fidel Castro believes this agreement isn’t enough because the economic embargo against Cuba remains in place.

5 thoughts on “When Cuba was the Center of Global Attention”