The poverty is multidimensional: 60% of the poor suffer from four or more hardships, while the official aid programs have little impact.

*Extracts from the document published by the World Bank / June 2017

HAVANA TIMES – Despite recent social advances, there is still a high proportion of Nicaraguans living in poverty. Although poverty has diminished in the last years, approximately one third of the population (some 1.7 million Nicaraguans) lived with a per capita consumption below the official general poverty line in 2014.

One of the poorest countries of Latin America

Nicaragua continues to be one of the poorest countries in Latin America. It had the fourth greatest proportion of people whose income was below the regional poverty line of 4 dollars a day (in terms of purchasing power parity or PPP) in 2014. In terms of poverty, the country was ahead only of Guatemala where poverty increased from 55% in 2006 to 60% in 2014; Honduras, where the poverty rate was 56% in 2014; and Haiti, where 87% of the population were classed as poor in 2012.

The per capita GNP [Gross National Product] in Nicaragua was about US $ 2,087 in 2015, the second lowest in Latin America after Haiti.

The country is also considered among the poorest when using non-monetary measures of poverty. Poverty is a complex phenomenon with many related factors. To capture its complexity, two studies recently used the Multidimensional Poverty Index of Alkire and Foster (2011). The MPI includes a number of equally weighted dimensions: health, education, standard of living, access to potable water and sanitation. Those lacking certain of these attributes are considered in multidimensional poverty.

According to Duryea and Robles (2016), Nicaragua was one of the poorest countries in Latin America in 2014 in terms of the MPI. More than 60% of the Nicaraguans experience multidimensional poverty, with four or more hardships.

One of the smallest middle classes in the region

Consistent with the high levels of poverty is the fact that Nicaragua has one of the region’s smallest middle classes. This is defined as the proportion of individuals with incomes between 10 and 50 dollars a day for the last 10 years according to the 2005 purchasing power parity.  This group has grown from 11% in 2005 to 18% in 2014. Nonetheless, the size of this group in proportion to the general population was one of the lowest in the region in 2014, greater only than the middle classes in Honduras and Guatemala (12% and 9% respectively).

The largest economic group consists of people who aren’t poor, but “vulnerable” – in danger of falling into poverty if hit by an economic shock. The vulnerable group, those whose incomes are between 4 and 10 dollars a day, grew from 34% in 2005 to 45% in 2014. The country has one of the largest vulnerable populations in Latin America.

Some highlights from the World Bank’s June 2017 report: “Nicaragua: Paving the way to faster growth and inclusion; a systematic country diagnostic”

The impact of the demographic changes

*“Demographic changes have also contributed through an increase in labor supply. Declining fertility rates have resulted in a reduction of the young dependency ratio and an expansion of the share of the population of productive age (15–64). Nicaragua’s working-age population increased almost threefold over the past 40 years (or by about 2.5 million persons).

“Today, 50 percent of the population is under 25 years old. The labor supply effect contributed to about half of the average increase in GDP per capita over 1990–2015 (or slightly less than one percentage point increase over an annual increase of 1.9 percent in GDP per capita).” 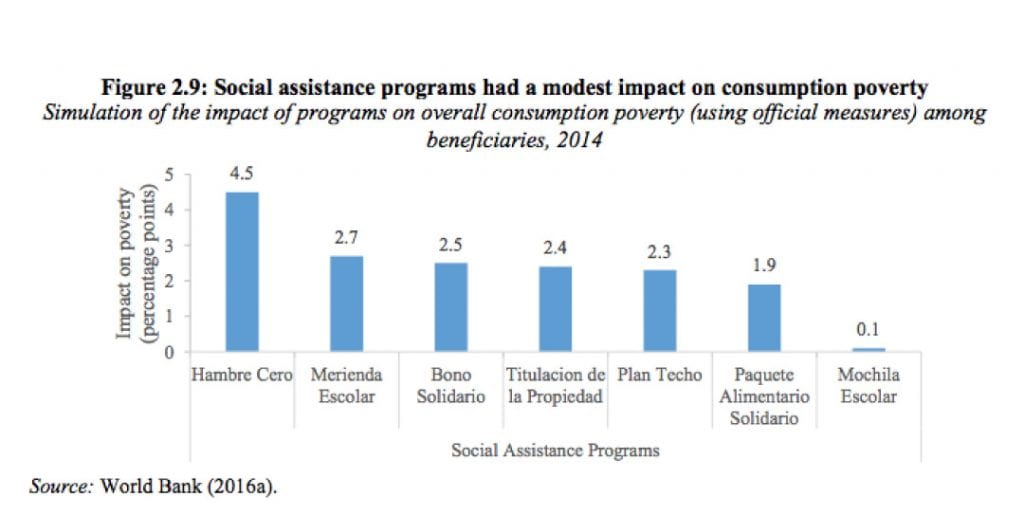 “Nicaragua has expanded the coverage of its social assistance programs, though they are generally small and insufficiently targeted, limiting their impact on poverty.

“Unlike most LAC countries, Nicaragua does not have a Conditional Cash Transfer (CCT). However, it currently has about 46 social assistance programs whose beneficiaries are mainly children, women, the elderly, and disabled. Most of these programs have low benefits and are insufficiently targeted. There is no evidence of the effect of these programs on welfare as there is no impact evaluation.

“However, simulations show that these programs had a modest impact on poverty (Figure 2.9). Among beneficiaries, Programa Amor [ The Love Program – a government project involving the establishment of child care centers for working parents, specialized attention for children with disabilities, and programs for kids on the street, among other things] is associated with a poverty reduction of 4.5 percentage points, while the rest of the programs by about 2 percentage points, with the exception of Mochila Escolar that does have any impact.”

Per capita GNP still below 1977 level

“Despite the recent uptick, Nicaragua has not been able to keep pace with comparators on per capita income growth and convergence.

“It’s per capita GDP has not been able to recover to 1977 levels. In terms of convergence, Nicaragua had a similar per capita income level to Mauritius and Malaysia 40 years ago. GDP per capita also shows an important divergence relative to the United States (US).

“The growth rebound has mostly relied on factor accumulation, primarily on a growing labor supply, and to a lesser extent on capital accumulation. Labor has been the strongest contributor to growth over the last 15 years. This is in line with the decline in fertility rates and the expansion of the working-age population in the country, together with increasing female labor participation rates.

“Capital accumulation has played a growing role over time. However, infrastructure and access to basic service indicators and their international comparisons point to a large infrastructure gap.”

“Nicaragua’s land productivity is also the lowest among regional peers, with average value generated only US$717 per hectare [approximately 2.47 acres]. To put this into perspective, this is between 40–60 percent of average figures for Honduras, El Salvador, and Guatemala, and only 16 percent of Costa Rica’s.

“Overall, the recent trend in productivity is promising: after either negligible or negative contributions over 2000–2009, total factor productivity (TFP) contributed positively over the last five years and labor productivity has rebounded since 2009.”

“Solid growth contributed to a significant decline in poverty since 2005, yet levels remain elevated and Nicaraguans are highly vulnerable to falling back into poverty. A one percent increase in GDP per capita was associated with a 1.7 percent reduction in overall income poverty between 2005 and 2014.”

“The demographic composition of the population changed in Nicaragua, with a larger share of working age population (aged 15-64), contributing to the reduction in poverty….  The demographic transition experienced by Nicaragua has already been reflected in a decreasing dependency ratio, defined as the ratio of dependents (individuals younger than 15 or older than 64) to the working-age population, a measure of pressure on the productive population.”

The need for education and productive employment

“Apart from its direct impact on economic growth… a lower dependency ratio also implies that every working-age adult now has to take care of fewer young dependents, which is likely to end up having a direct impact on reducing poverty rates through an improvement in per capita household income. As such, the lower dependency ratio was associated with a 12 percent reduction of the overall poverty between 2005 and 2014.”

“In order for Nicaragua to take full advantage of the first demographic dividend, and achieve higher levels of income and faster economic growth, a higher number of working-age people need to be employed productively. Youth who leave before completing the secondary level often fail to secure formal sector jobs, either falling into the unemployed ranks or ending up with lower incomes and poorer job prospects in the informal sector.”

*All quotes taken from the document: Nicaragua: Paving the way to faster growth and inclusion; a systematic country diagnostic” prepared by the World Bank and issued in June 2017.  Available at: https://openknowledge.worldbank.org/handle/10986/27560.

2 thoughts on “World Bank Confirms: a Third of Nicaraguans Live in Poverty”