We spoke with photographers 30 and under who told us how they experience the protests by documenting historic images.

HAVANA TIMES – On February 18, protests against the regime of Daniel Ortega entered their tenth month. From the beginning and with each new wave of repression, the world’s media gaze once again focused on Nicaragua.

National and international photographers have immortalized some of the April rebellion’s most iconic scenes. However, talented young photographers who do not work for any particular media also took to the streets to capture the moving and hard-hitting images of the civic struggle.

We spoke with four photographers under 30 who hit the streets on their own with their cameras. This is what they told us.

When the protests started, I didn’t take my camera the first week. I knew that I was witnessing history and I wanted to live it in the first person, not through a lens. But as the days passed, I felt the need to document it all, for myself as well as others.

I have always liked old photographs and historical archives. When I studied Social Communications at the Central American University (UCA), I used to go hang out in the media library and archives. It felt like my refuge. And that’s how I began to get involved and started documenting the marches and some of the conflicts.

I remember May 20th. I was watching on TV as several of the metal “trees of life” came down all along the avenue from Metrocentro to Tiscapa. I decided to go there with my camera but when I got there, people had already knocked almost all of them down. It was surreal because you walked and walked and passed tree after tree that had been brought down. I saw one that protesters had just pulled down and there was a large crowd of people tearing out spark plugs and cables. I decided to stay and take some pictures.

Since I wasn’t working for any particular media, I didn’t need to cover the story. And this gave me the freedom to document the stories that nobody was watching and that I could view from my own perspective.

I’ve learned so much during these past months, from how to focus and set the camera, to how to capture movement. I was also affected emotionally. The funeral of Gerald Vasquez was rough (one of the students murdered during the July 13 paramilitary attack on the UNAN university in Managua). I felt as if I was living inside a historic archive at the end of the 1970s. It was hard for me to accept that it was real. 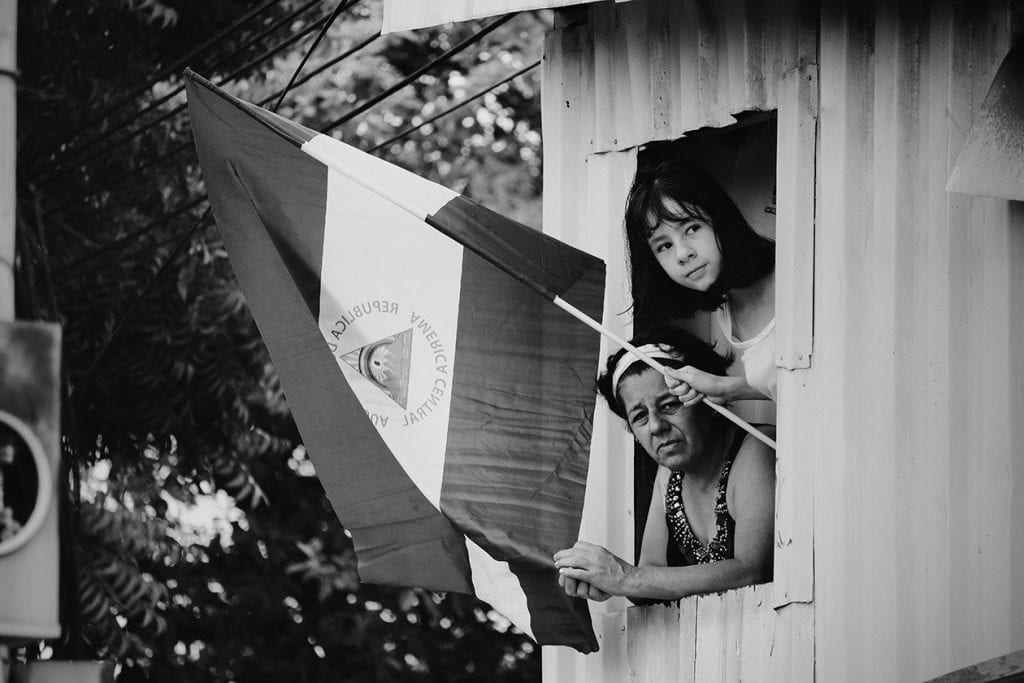 Photography has been calling to me since I was a child. The photos haven’t always turned out well-focused. But I’ve always tried to get people to understand my point of view. This is much more interesting to me.

When the protests erupted, I went to marches without a camera. But during one of the sit-ins of the Mothers of April I began to document what was happening. As I tried to portray what was happening in the marches and at the universities, my perspective changed.

I never went alone. I always went with friends and we started preparing a day before, networking with other people who told us what was happening all around us. We took many security measures.

My goal was to show what I was living through and I how I felt alongside thousands of other Nicaraguans. In each march there was a feeling of unity and I loved how this feeling made you want to go to every gathering. I felt empty if I wasn’t documenting what was happening in our country. But now that there are no protests, I’ve found other spaces where I can collect people’s stories. I take pictures of messages I see on the street or of the stickers that people are putting up. I am interested in knowing the political positions and attitudes of people in the struggle.

This is the work of photojournalists. It’s hard for young people like me who don’t do this fulltime and who have just barely entered this world. I started working on it once I realized that I wanted to become a photographer. But finding my own style has been a difficult process. 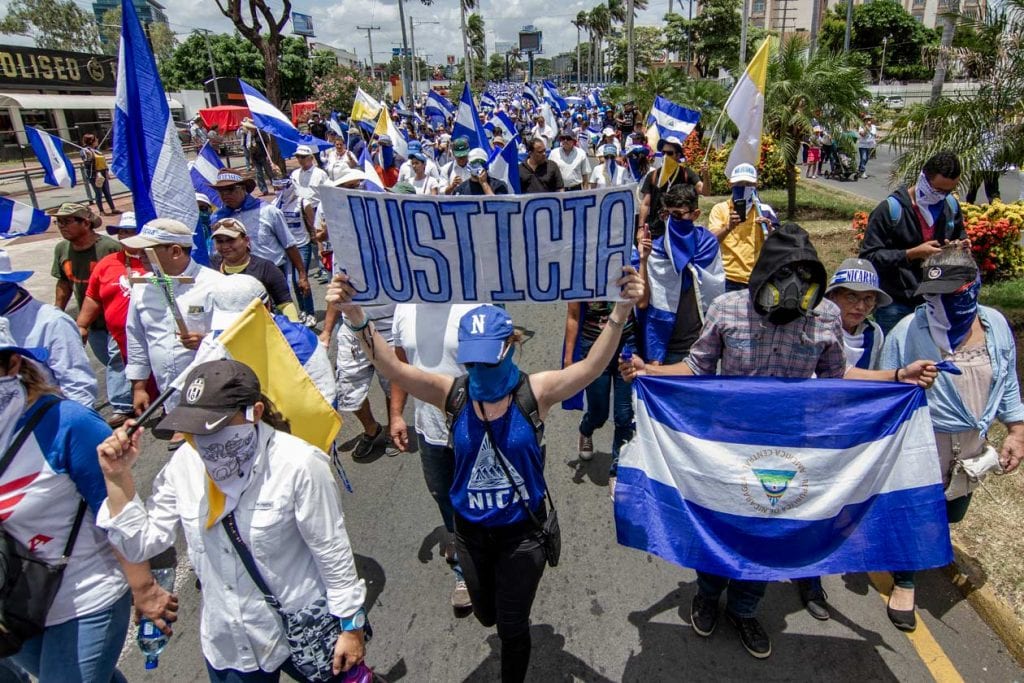 I began taking pictures well before the crisis began, during the marches of the Anti-Canal Peasant Movement and also during the women’s protests. Then the SOS Indio Maiz protests started and I never imagined that we would get to this point.

I decided to photograph what was happening because you never know what image you’ll capture and if that image will mean something in the future, because that’s how we understand the past. When the protests began because of the fire in the Indio Maíz [Biological Reserve], my initial idea was to create a mini-album of everything happening. But as the days passed, it turned into something else.

April 18 was one of the most difficult days for me. At Camino de Oriente, a friend and I had to run from the police and paramilitaries who were attacking the people protesting the government’s proposed social security reforms. We hid in a ditch. May 30th was another really bad day, the day of the Mother’s Day march. I was walking with my family and got really close to the area where they were attacking people.

If you’re not working for a media, the only thing you can do is try not to risk your life because a photograph is not worth that.

The crisis has also affected my ability to work. From April to August I did not do any studio work. Now I am trying to separate my photojournalism from my studio work because they are two very different things.

Whether or not you are working for a media, it’s clear that in the streets, everyone taking photographs is risking their lives. If you don’t support the government, you are a threat. 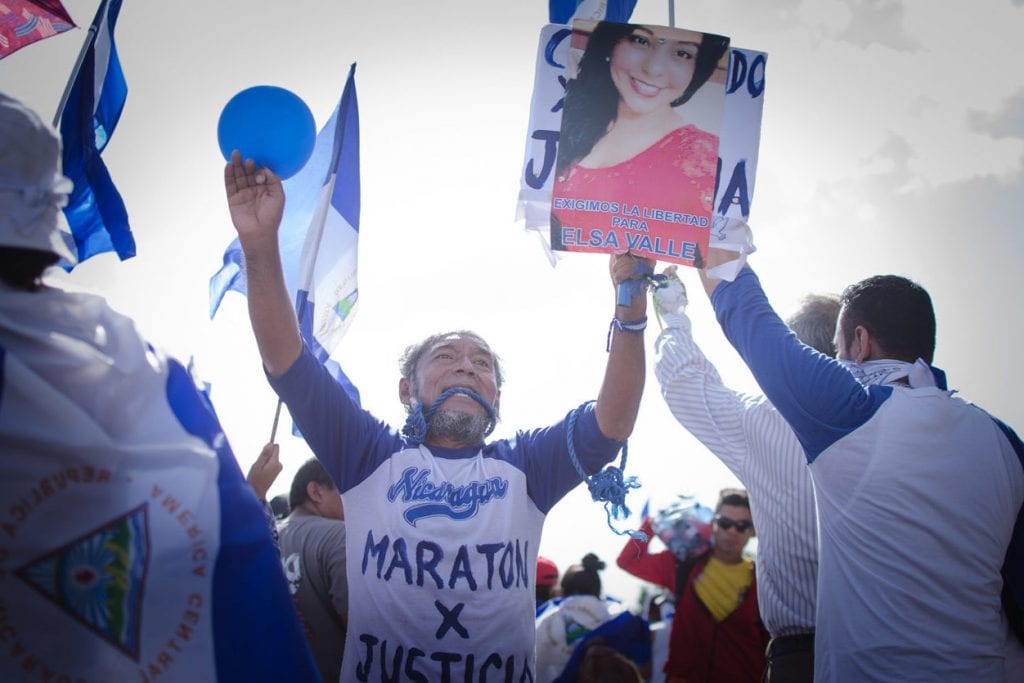 It was hard for me to pick up my camera and go outside during those months. I watched how they attacked photographers and I did not feel safe. The march calling for the liberation of all political prisoners was the first time that I took photographs. I took many photos of Alex Vanegas during this protest (the marathon runner arrested for running in the streets).

It made a deep impression on me to be so close to him and I stopped a minute to take his photo. And now…it seems unreal that he is in prison and that he’s going blind, according to what I read in different media. These are the photographs that I want to share.

I feel sad and even though it makes no sense, I feel guilty, because I saw it. I got to know him at some level and now he’s in prison. To think that this person is behind bars despite all the people who have supported him and who recognize his heroism and bravery…

One of the things that got me out of the house was the need to have a personal graphic record of everything that is happening. And that’s how I began to gather courage and decided to contribute by taking pictures and creating this archive for myself. Maybe over time it will become more important.

The crisis has affected my work financially, but I’ve also been able to collaborate with others and meet people whom I would never have met, otherwise.

The crisis has also been a roller coaster ride in terms of my spirits, because there are moments when you feel inspired, you grab your camera and you do something. But then there are the days when I say to myself—I don’t even want to touch the camera.