HAVANA TIMES, June 15 — Globalization didn’t begin yesterday, for 500 years global flows have permeated the island of Cuba.  Julio Tang is one of those who are part of the Chinese diaspora on this island.  He is a historian, teacher of the Chinese language, a cultural promoter and a social activist.

I was always fascinated by his interest in methodically learning — piece by piece — the culture of that distant land while in search of his ancestry.  He has combined this with a deep critique of the recipe of the socio-economic Chinese model that is so popular today among some segments of the Cuban intelligentsia.

I met Julio a some years ago while making incursions into critical left activism, so increasingly necessary for Cuba.  Later Tang had the good fortune to travel to China to study as part of an intergovernmental collaborative effort.  This has not only deepened his knowledge in the academic environment, but has also allowed him to delve into what Marx called praxis: for a while he was part of the modern Chinese proletariat, which he wrote about in a revealing ethnographic profile.

Today he is “our man in China.”

Rarely does one have the opportunity to know such an exacting and daring researcher, focused on directly knowing how one of our ancestral human cultures operates “in the flesh and blood.”

Because of that I decided to conduct a “long distance” interview with this activist and studious person who for some Cubans represents a privileged “first hand” source of information for learning the details about the controversial Chinese model.

HT:  What’s a young Cuban guy like you doing in China?  And how did you wind up there?

Julio Tang:  I’m studying in my second year of a master’s program for teaching Chinese as a second language.  In 2009 I obtained one of the scholarships granted by the new system of cultural assistance from the Chinese government through their embassy in Cuba.  This was offered to the community in Havana where I live: Chinatown.

I’ve lived in Havana Chinatown all my life, and since I was little I’ve received and perceived the influences of Chinese culture, immediately from the constant presence of older Chinese who would hang around or from those who lived in that area, as well as through the stories told to me by my parents about my grandfather. 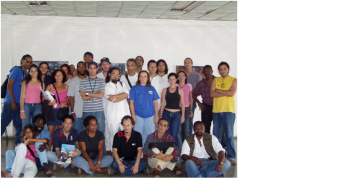 Unfortunately, I lost my grandfather when I was four, and with him died my direct relationship with that culture.  This meant that over numbers of years I had to construct my own aged, selective and ambiguous identity.  This is characteristic of the uprooted nature of youth with Chinese and Cuban parents, or those Cubans having some Chinese ancestry in post-1959 Cuba and whose relationship with the culture of their ancestors is not very strong.  There are some who decided not to retrace and resurrect their ancestry, but I focused on it – and not only on my ties with it but the study of it as well.

HT:  People in the street must have called you “Chino.”  What were your experiences like before going to China?

Julio Tang:  First, we need to stress that in Cuba, people traditionally use the term “Chino” to label any person whose biological features, basically facial ones, reflect some relationship with the mongoloid archetype.  Given this, even residents of Cuba’s eastern provinces — tied to the early indigenous of our island and now closely related to people of African descent — with darker skin but with almond-shaped eyes and prominent cheekbones, are also frequently called “Chinos.” I’m not speaking about Japanese or Koreans now.

In my case it wasn’t like that; plus, with this easing that our culture is going through is resulting in some cases where perceptions about people of Chinese descent and their characteristics are exaggerated.  Me, for example, biologically I’m considered as “Chinese” in Cuba, or at least someone close to that.  But if they compare me with some of the students from that country who are on the island to study Spanish, then one would say that they’re “true” Chinese.

But anyway, I’ve never perceived any type of discrimination. I’ve never experienced any mocking with respect to me or my link to the culture of my ancestors.  These things happen, like many other things, but I’m completely Cuban and my biological characteristics aren’t very prominent; they don’t directly affect racial considerations in Cuban society.

HT:  And in China? Did you experience any social/cultural shock after you came to that country?

Julio Tang:  Definitely.  Living in China for a relatively long time has convinced me of my total belonging to the Latin ethnos, specificity the Cuban ethnos.  In fact, I’ve felt that my ties with Chinese culture and the country have never been as weak as they are now.  That doesn’t mean that I’m renouncing my ancestors and my family history; it means that my history is more Cuban than Chinese; that this second one is right now even declining in its native country.

It means that at the same time, though my grandfather created a new family in Cuba, he would have never returned to China and that bridge inevitably closed.  The cultural source dried up and the western world permeated the entire reality of those close to me and mine.  It’s such that today’s China is now as distant — except for the historical conjunctures — as current Africa is from Cuban descendants of slaves.

Of course these they are very personal opinions, and though there are people who I know who share them to a greater or less degree, there are also others who don’t agree and their relationship with the Asian homeland of their ancestors is closer.  Still, some of the elderly Chinese in the neighborhood who have had the opportunity to return to their native country after many years, they count the minutes for their return to Cuba.  Many things change, and not only from the economic point of view.

Chinese friends have told me that Cuba is going through a historical moment similar to what they experienced in the first years after the initiation of economic reforms in 1978.  However, there are evident differences, beginning with the fact that at that time the Chinese — faithful to their millennial culture, which was closely related to contemplation, but also pragmatism — concretely broke from the East European bloc of Soviet Stalinist socialism.  But at that same time, Cuba deepened its uncritical acceptance of that “civilizing” model, and we remained in that mode for thirteen more years.

Now the Cuban government is taking steps in search of the survival of their political elite, leaving the majority of the country’s population to their own fate in a context of world crisis and obvious national poverty.  The Chinese have reached a high economic level of development in the big cities, and they look at us as a little brother who’s taking his first steps in the world of capitalism.

That’s one of the aspects that most impacted me, and I summarized it in a question: How is it possible that a communist government — for me there’s no contradiction between those two terms — that always, even now, has proclaimed to represent and defend the proletariat and of popular sectors, can defend its position of power so forcefully in society along with the capitalist way of life, in the first place against the same people it says it represents?  I’m referring to the case of the Chinese.

HT:  They say that you are a founder of the Haydee Santamaria Collective and of the Critical Observatory.  What do those mean for you?  Do you have any experiences you’d like to share?

Julio Tang:  Well, if I’m not mistaken, everything began in 1997 or ‘98.  A group of people associated with the faculties of History, Philosophy and Sociology at the University of Havana met to discuss politics, philosophy and history.  For around five or six years, very passionate and even virulent theoretical and practical discussions took place in that milieu, but we were able to reach the point of organizing the Collective.  Soon after came the Critical Observatory (OC), one of the settings for putting those notions into practice.

To belong to both groups has been especially significant for me.  Questions are very simple in some cases, but they aren’t in every situation, like in the cases of Elian Gonzalez, the Cuban Five, the quasi fascist (if not outright fascist) positions of the Bush administration, the “Battle of Ideas” campaign, and other very varied civic, politics and cultural questions in Cuba over the past ten years.

All of that I was able to better analyze and understand with the support of my sisters and brothers in the collective.  Without that it might have taken me years to arrive at the same conclusions.  Thanks to those exchanges I’ve been able to discover, deepen and deploy my own human, philosophical, political and cultural convictions.  Of course this whole process has been influenced by bonds of friendship and comradeship between us, an element that I consider essential for the survival of both groups.

HT:  Has your vision changed about the Collective and the Observatory after visiting China?

Julio Tang:  In general, my vision of the situation in Cuba, even being far removed from it and getting information about what’s happening from indirect sources, has changed substantially.  To leave one’s country in any manner and for any period of time, forces one to reformulate even the most ingrained concepts they might have.

Personally, I’ve maintained the convictions that pointed toward the higher ups but I’ve found some questions that are helping me to enrich those, all in relationship to Cuban society.  Some of the members of the Collective and the OC have been able to travel outside of Cuba and I’m sure they’ve experienced the same thing.  The political, civic and cultural struggle in Cuba needs interaction with the other societies of the world with which we link ourselves, and the Collective and the OC are not removed from that.  Meanwhile, the more we can learn and help, the better.

2 thoughts on “A Chinese in Cuba, a Cuban in China (Part I)”