Her husband has been in jail in Cuba for more than four years – 1,521 days, to be exact. And she said she is angry and frustrated that the U.S. government doesn’t do more to secure his freedom. She said:

“…It’s been way, way too long and our government is responsible for Alan being there and I just can’t believe that they can’t do anything about it. Sometimes I wonder if there’s some kind of motive behind it. Not to be paranoid, but it just blows my mind still that they don’t even mention Alan’s name.”

Gross reiterated her call to President Obama to step up efforts to free her husband. Asked about Secretary John Kerry’s recent request that the Vatican help out, Gross said:

Judy Gross also faulted the Cuban government for jailing her husband in 2009, but expressed admiration for the Cuban people.

“I really love Cuba and I hope to keep going back under different circumstances. The people are so friendly…”

A full transcript of our interview is below:

Tracey Eaton: How are you?

Judy Gross: I’m doing OK, just you know living life every day and trying to do the best I can.

TE: After your last visit to Cuba, do you see any hopeful signs? Did you learn anything new that gives you reason to be more optimistic?

JG: You know, I was just there three weeks ago. The thing that was positive, I think, and that was different is that just coincidentally Scott (Gilbert, the Gross family lawyer) and I were there at the same time as the State Department delegation for the migration talks, so they got to meet with Alan and that’s the first time, other than the Interests Section in Cuba, that’s really the first time somebody from State has met with him.

So if there was anything positive I think it was very good for them to see Alan and to talk to him and to see what his daily life is like and to hear his issues and how he’s feeling. It put something real to the person, to get to really see him face to face.

TE: Do you know which officials met with him?

JG: I don’t remember all of them. The usual people from the Interests Section in Cuba, you know, the chief of mission, and the delegation was headed up by (Acting Deputy Assistant Secretary for Western Hemisphere Affairs Edward) “Alex” Lee from State here in Washington.

TE: Did they give you any of their impressions after that visit?

TE: That must have been an emotional meeting in a way because I’ll bet Alan is extremely frustrated and angry and wants to talk to somebody. What was his reaction to the meeting?

JG: Pretty much everything you just said. He was angry. He was frustrated. I mean, he expressed those things I should say – anger and frustration and a lot of sadness and grief and lots of other adjectives that he expressed.

There’s a lot pent up in somebody when they’re incarcerated for four years and it’s basically in a one-room cell. 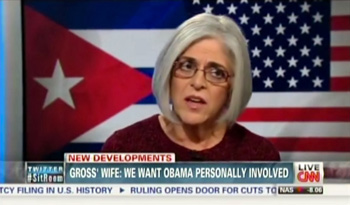 TE: I watched several of your interviews on CNN and other media outlets and you had talked about the need for President Obama to be personally engaged. Do you feel that now he is personally engaged or is intervening?

JG: I have not heard anything and so I can’t say that that situation has changed. It might have and I just don’t know that it has, but as far as I know, and as far as I feel, he still needs to get, the White House needs to get involved in this. It’s very upsetting obviously that they haven’t.

TE: Yeah, I’ll bet. I wonder has your opinion of the U.S. government changed any since this whole ordeal began?

JG: (laughs) I think that I have gained a lot of perspective on bureaucracy and how big this government really is and how bureaucratic it really is and (it’s) kind of difficult to mire through it. But as far as the government, no, really it hasn’t changed.

I still believe in our political system.

TE: I understand. So it’s not as if U.S. officials are reaching out to you regularly and keeping touch with you and giving you updates or anything like that?

TE: OK. And can you describe the experience of having to sue the U.S. government and Alan’s employer to try to obtain some sort of compensation?

JG: I was never there at any of the meetings, the litigation or any of that, so I personally can’t describe any feelings of actually being there. But it was very frustrating because it took so long and I was very scared to be honest with you. I didn’t know how I was going to live. I mean I would have had to move into like a, what do you call it, not even a one-bedroom apartment. A very, very tiny apartment and live very carefully. And I still am afraid of my future financially. So that was frustrating that that all took so long. And I’m just glad it got settled.

TE: I don’t know the latest. Isn’t there an appeal in the lawsuit against the U.S. government?

JG: That’s something because there’s still litigation that I can’t really talk about.

TE: I was a little surprised, I read a few days ago that U.S. lawmakers had defunded USAID programs in Cuba in their newest budget.

TE: It hasn’t really gotten much notice at all. I just wondered if you know if your husband’s case somehow influenced that decision?

JG: I can’t speak on that. I’m going to have to find out.

TE: It’s been voted on and approved.

JG: Holy cow! How would (Sen. Robert) Menéndez allow that to happen? I’m very surprised that I didn’t hear that.

TE: Do you think release of Fernando González (a Cuban Five member set to be freed on Feb. 27) will have any impact on the case?

JG: No, I don’t. I don’t think that will have any change on anything.

TE: What about Secretary of State Kerry reportedly asking the Vatican to help win Alan’s release. Any idea whether that might help in the process? Have you heard anything about that?

JG: I’m very skeptical about that. We’ve had Vatican contact in the past with the former Pope and I just, you know, I would love to be wrong but I don’t think anything’s going to come from that. And it’s really Secretary Kerry’s job to free Alan, not the Pope. So instead of asking the Pope, I think Secretary Kerry should work on it.

TE: Good point. And altogether you’ve been to Cuba how many times?

JG: I think this was my sixth trip.

TE: I read that the Cuban foreign minister told you the Cubans were waiting for U.S. to send an American envoy who could start negotiations with the Cubans. Did you get that same impression the last time?

JG: The foreign minister is Bruno Rodríguez. I met with him the last time, not this most recent trip. In this most recent trip, we were told that Cuba has reached out via letter asking the United States to contact them so they can start talking, and they said there were no preconditions.

TE: And during your trips to Cuba I imagine your focus is like a laser on Alan, but have you gotten any impression of the country or any opinion on the country itself?

JG: I wish I could get out of Havana. I never got past Havana. I really love Cuba and I hope to keep going back under different circumstances. The people are so friendly and with all the difficulties they have, and they certainly have plenty of difficulties, they seem to just maintain great mood. This is what I see from observing. I don’t have any personal relationships with anyone. But they just, the people that I have met they have been very gracious and very kind and I love the feel of the city. I look and try to think what it was like before the infrastructure started falling apart. I love the music. I love the culture.

TE: If time machines existed, I’d like to go back to 1958 to see what that was like.

TE: That will be great.

Some lawmakers say Cuba should make concessions to the U.S. – improving basic human rights, for instance – before we even talk with Cuba about Alan. What’s your opinion of that?

JG: My opinion is that they need to sit down and negotiate whatever they want to negotiate. I don’t want to get involved in the political issues of Cuba. Our lawmakers- I think everything should be on the table. I don’t think our lawmakers should make any preconditions, let’s put it that way.

TE: I just have one more question and it’s very open-ended. I wonder, is there anything that journalists haven’t asked you that you wish they would have? Is there something that you would like to cover or would like people to know?

JG: Well, that’s a question I’ve never been asked. That’s a tough one. I just want to reiterate my frustration I would have to say with both governments. I can’t just say the U.S. government obviously. The Cuban government is very much at fault, too, for arresting Alan to begin with. But you know it’s been way, way too long and our government is responsible for Alan being there and I just can’t believe that they can’t do anything about it. Sometimes I wonder if there’s some kind of motive behind it. Not to be paranoid, but it just blows my mind still that they don’t even mention Alan’s name.

TE: I’ve thought it strange, too. We’re supposedly the most powerful government on earth. It’s occurred to me – could they take him by force? Although then I imagine that could endanger Alan. It’s just hard to believe we can’t do more.

JG: I think politics rears its ugly head in a way. You might want to find out more about the influence that Menéndez has and (U.S. Rep.) Ileana (Ros-Lehtinen) and (Sen. Marco) Rubio, but especially Sen. Menéndez. I honestly think that he has a lot of power in this whole thing. I could be wrong, but I can’t think of any other reason why the president won’t speak about it.

TE: It’s great to talk to you.