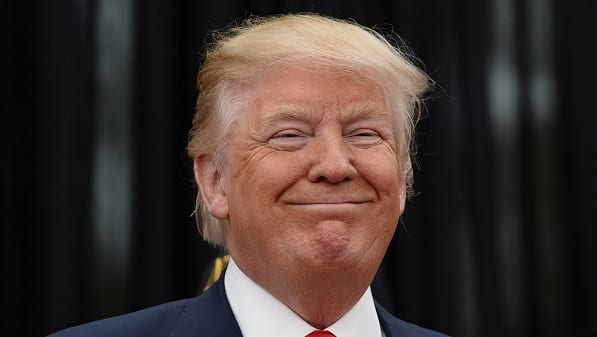 HAVANA TIMES – There are two faces often in the US news these days, Donald Trump and Alexandria Ocasio-Cortez.

Trump has been on the front pages daily for the last three years, in virtually all publications, shooting from the hip with his outrageous statements, prejudices and self-praise.

He is a master of knowing that even bad publicity is publicity in the end and keeps his name at the tip of people’s tongues. He is like a Coke even if you know what’s in the ingredients.

Alexandria Ocasio-Cortez, a first-term congresswoman from New York, is without a doubt a much more pleasant face to see in the news.  She is an example of the new breed of young well educated women from the non-traditional left of the Democratic Party that are challenging the status quo, both in their Party and the nation. 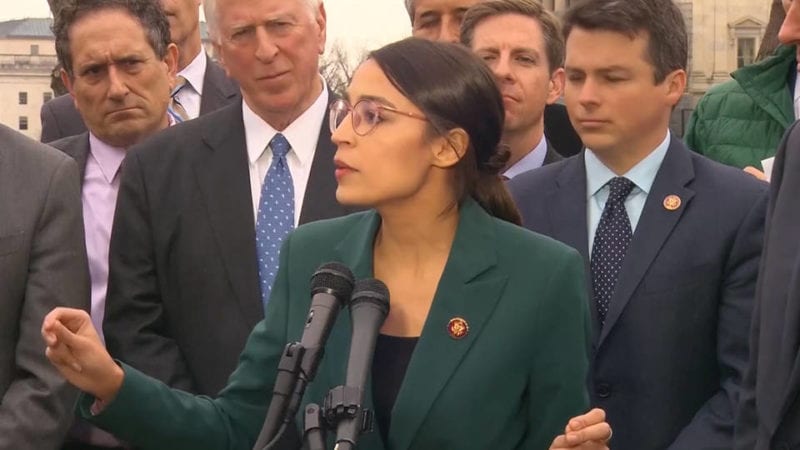 Trump is all over the news as usual with his attacks on immigrants, belittling of women, threats to his enemies and his ability to fabricate the facts on just about any issue, knowing that his core supporters could care less if his statements are true or false.

Meanwhile, the other face in the news, Ocasio-Cortez, has, along with Senator Markey, just proposed a sweeping “Green New Deal” for the United States that is shaking up the status quo politicians in her own party, like speaker Nancy Pelosi, and the country’s corporate world and the Democrats and Republicans that represent them.

The following is a Democracy Now report from today on the issues involved in this bold proposal.

Democratic House Speaker Nancy Pelosi seemed to mock the proposal on Wednesday, referring to it as a “green dream, or whatever they call it.” We speak to journalist Kate Aronoff, a fellow at the Type Media Center and a contributing writer to The Intercept and Jacobin.

AMY GOODMAN: This is Democracy Now!, democracynow.org, The War and Peace Report. I’m Amy Goodman. After months of anticipation, New York Congressmember Alexandria Ocasio-Cortez and Massachusetts Senator Ed Markey introduced a resolution for the Green New Deal Thursday, presenting a sweeping plan to achieve net-zero greenhouse gas emissions in 10 years and create economic prosperity for all. This is Congressmember Ocasio-Cortez introducing the resolution.

REP. ALEXANDRIA OCASIO-CORTEZ: Today is the day that we truly embark on a comprehensive agenda of economic, social and racial justice in the United States of America. That’s what this agenda is all about, because climate change—climate change and our environmental challenges are one of the biggest existential threats to our way of life, not just as a nation, but as a world.

AMY GOODMAN: The blueprint laid out by Congressmember Ocasio-Cortez and Senator Markey aims to overhaul the U.S. economy with green initiatives that will transition the U.S. to clean energy while guaranteeing all Americans clean air and water, food and housing security and robust healthcare.

In an interview with Politico Wednesday, House Speaker Pelosi seemed to mock the Green New Deal, saying, quote, “It will be one of several or maybe many suggestions that we receive. The green dream, or whatever they call it, nobody knows what it is, but they’re for it, right?” she said. Congressmember Ocasio-Cortez addressed what some are calling a sleight by Pelosi, in an interview on MSNBC on Thursday with Chuck Todd.

REP. ALEXANDRIA OCASIO-CORTEZ: What I introduced today was a resolution, not a bill. A resolution just has to pass the House. And the substance of our resolution is not a plan, it’s the scope of the plan.

REP. ALEXANDRIA OCASIO-CORTEZ: And so, I think, in terms of the scope of the plan, I think—I think we’re going to get there. We launched with over 60 co-sponsors in the House. That is pretty crazy. And so, we were able to launch on day one with 60 co-sponsors. We have more rolling in. And I think we may even get a majority of the Democratic Caucus on board.

Well, for more, we’re joined by Kate Aronoff, a fellow at the Type Media Center, a contributing writer at The Intercept and Jacobin. Her most recent article for The Intercept is headlined “The Green New Deal Takes Its First Congressional Baby Step, as Pelosi Mocks ‘Green Dream or Whatever.’”

Welcome to Democracy Now!, Kate. Talk about the significance of what happened yesterday.

KATE ORONOFF: So, what happened yesterday was Alexandria Ocasio-Cortez and Ed Markey really sort of taking the first steps toward what it will mean to pass legislation for a Green New Deal. So, as Representative Ocasio-Cortez said in that clip, this is not the plan to implement the Green New Deal, this is not going to become law, but what it does do is lay out sort of broad principles by which that plan can be implemented, and sort of ramp up pressure on the Select Committee on the Climate Crisis, which Speaker Pelosi created several weeks ago and named members to yesterday, and sort of, you know, puts the pressure on them and sort of on politics more generally, and particularly 2020 candidates, to really come out and endorse a very specific version of what a Green New Deal is, and make it more than just a talking point.

AMY GOODMAN: So, many people are wondering why Alexandria Ocasio-Cortez, who this has been the issue that she has really been pushing for, is not on this committee.

KATE ORONOFF: Well, so, what came out yesterday, interestingly, after news that she had been snubbed, which turned out to be false—Nancy Pelosi had actually asked her to be on the committee, and she turned them down. And I’m not totally sure why. I mean, she did say yesterday that, you know, she didn’t need to do that, on Chuck Todd.

But my guess would be that she thinks she can do better elsewhere. She’s on two very powerful committees, with real power, that have subpoena power, unlike the Committee on the Climate Crisis. And, you know, she can get valuable work done there. And she can get work done in doing what she did yesterday, which is really standing with social movements, really standing with folks who are pushing for a Green New Deal outside, and pushing that in the public conversation rather than in these hearings.

AMY GOODMAN: Now, I assume House Speaker Nancy Pelosi is bothered by this whole thing, because one of the first things that Congressmember-elect Alexandria Ocasio-Cortez did, before she became congressmember, is protest outside of the House speaker’s office, specifically around this issue. But how significant is it that she was mocking it and saying “this green dream, or whatever this thing is, that everyone’s for”?

KATE ORONOFF: Well, I think it’s really significant because of just how much of an outlier it seems like. You have politicians who, for so long, you know, have fashioned themselves as sort of business-friendly centrists, all of a sudden, in the last year, because of the sort of rising popularity of really progressive ideas, because of Bernie Sanders, because of people like Ocasio-Cortez, coming out and supporting plans for something as ambitious as a Green New Deal. And so I think Pelosi really looks increasingly like an outsider, even when she talks about climate and even when she says, “I am committed to this issue.” Her solutions to it, or, you know, so-called solutions to it, are not just up to the task. And I think more people are seeing that.

AMY GOODMAN: So, what is this Green New Deal? What is this committee?

KATE ORONOFF: So, the committee and the Green New Deal are separate things. So, Representative Ocasio-Cortez had asked for a Green New Deal select committee to arrive at a plan over the course of a year to figure out how we would actually implement this thing, how to do an economy-wide transformation. And so, in lieu of that, what this resolution does is lay out 14 projects and has several principles over which that process can be carried out and to get people to start thinking about it. So, it includes sort of decarbonization of electricity, robust investment in public transit, also things like preventing the abuse of eminent domain, ensuring free, prior informed consent for indigenous folks in seeing infrastructure built on indigenous land. It’s a really sort of sweeping, broad legislation that really puts the meat on the bones of the Green New Deal idea.

AMY GOODMAN: Let’s turn to New York Congressmember Alexandria Ocasio-Cortez speaking on 60 Minutes with Anderson Cooper about how to pay for the Green New Deal.

ANDERSON COOPER: You’re talking about zero carbon emissions, no use of fossil fuels, within 12 years?

REP. ALEXANDRIA OCASIO-CORTEZ: That is the goal. It’s ambitious. And—

ANDERSON COOPER: How is that possible? Are you talking about everybody having to drive an electric car?

REP. ALEXANDRIA OCASIO-CORTEZ: It’s going to require a lot of rapid change that we don’t even conceive as possible right now. What is the problem with trying to push our technological capacities to the furthest extent possible?

ANDERSON COOPER: This would require, though, raising taxes.

REP. ALEXANDRIA OCASIO-CORTEZ: There’s an element where, yeah, people are going to have to start paying their fair share in taxes.

ANDERSON COOPER: Do you have a specific on the tax rate?

REP. ALEXANDRIA OCASIO-CORTEZ: You know, you look at our tax rates back in the ’60s, and when you have a progressive tax rate system, your tax rate, you know, let’s say, from zero to $75,000 may be 10 percent or 15 percent, etc. But once you get to like the tippy tops, on your 10 millionth dollar, sometimes you see tax rates as high as 60 or 70 percent. That doesn’t mean all $10 million are taxed at an extremely high rate, but it means that as you climb up this ladder, you should be contributing more.

AMY GOODMAN: So, that’s Congressmember Ocasio-Cortez on 60 Minutes, Kate Oronoff, talking about the payment of how you can fund the Green New Deal.

KATE ORONOFF: Right. And as she rightly points out, and has several times since, we never ask this question when we’ve decided on national priorities. So, whether that’s the New Deal itself, whether that’s World War II, when the nation decides that it wants to do something, we don’t talk about, you know, “Who will we have to tax in order to do this? Who will have to pay up?” We have the resources. We denominate our own currency. And, you know, there’s no reason why we should sort of hold this conversation hostage, about dealing with the existential threat of climate change, to these sort of parochial concerns about the deficit and these sort of abstract ideas.

What’s also worth bringing up is that, you know, this conversation is never had in relief to the massive amount of costs that climate change will bring about if we don’t do anything about it, which the National Climate Assessment report has said, you know, could be up into the trillions of dollars. The United States is one of the most vulnerable countries to climate change. And so I think that really has to be a part of the conversation, is not sort of how much will this cost us now, but how much will it cost us if we don’t do anything about it.

AMY GOODMAN: Well, we’re going to leave it there for now, as an Arctic chill descends on the Midwest. I thank you so much, Kate Oronoff, fellow at the Type Media Center, contributing writer to Intercept and Jacobin. We’ll link to her latest piece at The Intercept, “The Green New Deal Takes Its First Congressional Baby Step, as Pelosi Mocks ‘Green Dream or Whatever.’”