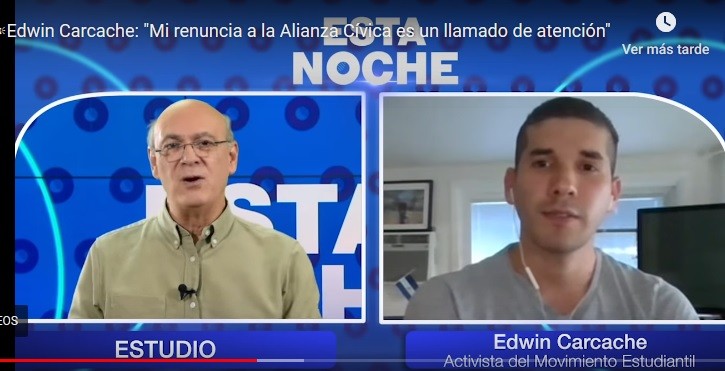 In announcing his resignation from the Civic Alliance, Carcache criticized what he called “the displacement of the youth.”

HAVANA TIMES – From his “forced exile” in California, student leader and former political prisoner Edwin Carcache unexpectedly announced his withdrawal from the Civic Alliance for Justice and Democracy. The reasons he gave involved differences “in the performance” and the management of the organization, according to a letter he made public.

“The work of the commissions, the reluctance to take up certain topics, made me lose confidence in the group,” states the letter, dated this past February 4th. “Unfortunately, we haven’t been able to manage this through the media, and the internal communication is ever more complex. Exiles should be taken into account.”

Carcache revealed his separation from the Alliance via the internet television platform 100% Noticias [100% News]. The university leader explained to journalist Lucia Pineda Ubau, (also a released political prisoner) that he had decided to leave the organization because “there’s been a displacement of the youth”, and the “farmers, large businessmen and traditional politicians won’t give up their own interests.”

“I’m dropping out of the Alliance for several reasons, but above all for my self-care, because of what’s happening internally. I’d like things to move forward, but I feel it’s important to focus on the youth and there’s been a displacement of these. We’re falling into the vices of traditional politics,” Carcache told the news station.  “We need to be consistent with what we want as opposition movements, and keep in mind where we want to go,” he declared.

In his criticism of the rural movement, Carcache accused Medardo Mairena of “speaking out of both sides of his mouth.” “Medardo has to stop the doublespeak. Unity doesn’t mean spending every day having meetings in hotels. There has to be real commitment,” the university leader asserted.

Carcache also lamented the fact that the farmers’ movement asked the Civic Alliance for three positions, but in practice hasn’t filled these seats. “The two-facedness disturbs me; the space is there, but they don’t fill it. The same redundancy continues. There are people who are holding up the process.  Now that the topic of the Coalition is pending, many say that unity is good, but when the time comes, they don’t join in,” he said.

Edwin Carcache’s resignation from the Civic Alliance occurs at a moment when the Blue and White opposition is trying to consolidate a “National Coalition N”, conceived as a common front against the Ortega-Murillo regime. Although the opposition spokespeople from the Civic Alliance and the National Blue and White Unity assure that they’re working towards the consolidation of such an opposition bloc, up until now the advances in this process haven’t been clear due to the differences among the diverse sectors. The opposition has set February 25 as a goal for presenting a consolidated coalition.

In the past few weeks, the nascent “National Coalition N” has sustained meetings with a number of political parties: Yatama; the Constitutionalist Liberal Party (PLC); and the Party for Democratic Restoration (PRD), with an eye towards their possible incorporation, but also to discuss the demand for electoral reform. Some of Carcache’s discrepancies come from his perception that there’s been a greater focus on the traditional political parties, leaving the organizations that arose from the April 2018 rebellion to one side.

Carcache also aimed his criticisms at the large business owners, alleging that “more commitment is lacking” from them. According to him, “a lot more is needed” noting as an example the ambivalence some of the business owners have shown to the proposal for a national strike. “It’s a question of doing quick and effective things. We’ve dragged the issue out,” the youth commented during his interview.

“He’s a very brave youth. From our point of view, the doors remain open for his return whenever he feels more comfortable,” Chamorro assured. “He was participating in the directive council meetings when the connection could be maintained.”

Edwin Carcache was a founder of the April 19th Student Movement and relaunched the student group at the end of 2019. He has now also withdrawn from that Movement, because it continues to be part of the Civic Alliance. Sources from this movement affirm that internally they had requested to replace him on the Alliance steering committee, “because he wasn’t effective”. “So that, before this happened, he was questioning the roles.”

Carcache affirmed that he’d continue working from exile, especially with the released political prisoners.  He insisted that the youth shouldn’t be displaced.

“I recommend to the adults that they support the youth, who aren’t only the future of Nicaragua, but its present and the hope of our people,” he stated.