“The real stress for me is the white page”

HANANA TIMES — A month ago, on the second day of the Havana Contemporary Music Festival, the audience of the National Theater had the chance to listen to the “Concerto for violoncello and string orchestra” a piece by Nimrod Borenstein, a composer of Israeli origin, whose compositions, despite his young age, are gaining worldwide reputation with performances in Europe, Canada, Australia, Japan, Israel and the United States.

Nimrod Borenstein was born in Tel Aviv, but grew up in Paris where he started his musical education at the age of three. In 1986 he moved to London to pursue his violin studies with Itzhak Rashkovsky, at the Royal College of Music.

He was then awarded the highest scholarship from the Leverhulme Trust to study composition with Paul Patterson at the Royal Academy of Music. Now, he is listed amongst the alumni as an illustrious past student.

The “Concerto for violoncello and string orchestra” was performed in Cuba by the Cuban-Russian cellist Makcim Fernández Samodaiev, who described the piece as “apparently simple, but then you discover traps, complexities; this shows a lot of elegance by the composer”.

Even though the response of the audience to the “Concerto for violoncello and string orchstra” was very enthusiastic, two days after the concert, I read a critique published in Granma newspaper, which described Mr. Borenstein’s piece as formally aged and disappointing.

I was both surprised by the critic, and curious about how it could affect a composer who has already reached so much recognition in so many parts of the world. That was one of the questions I wanted to ask Nimrod Borenstein, but unfortunately he couldn’t travel to Cuba for the Festival. However, he found time to answer my questions via email.

You said in an earlier interview that you wanted to be like Beethoven when you were six and started writing music. Why Beethoven and not Mozart, Bach or another composer?

When I was a young boy my greatest desire was to become a great composer. As the greatest composers of all time, Beethoven, Mozart and Bach were my heroes and models. I aspired especially to be like Beethoven as I felt closest to him; his music is full of passion, drama, intensity and courage and even as I was writing in a very different style (at that time my own twelve notes system) I was immensely attracted by the essence of his music.

I still love and admire Beethoven but as time has passed, I have changed. I think that at present my music has more in common with composers who convey in their music both extreme drama and sadness as well as lightness and purity, composers who, as well as expressing the courage of humanity, express the fragility of our existence. Composers like Mozart or Schubert.

You have affirmed that there is a Jewish element in your music – how does this present itself?

Fifteen years ago I was asked by the director of a festival of Jewish Music to explain to her how the piano sonata she had just commissioned me to write was going to be “Jewish Music”. Here’s the answer I gave her then.

When I compose I want to create something of the highest beauty, a music that transcends our human condition and feels as it was always here and could not be otherwise. I believe that by being entirely truthful and honest in my art, my music will necessarily convey all that I am. As a result I think that it is not, for example, writing music inspired by traditional Jewish melodies that my music would be most truly Jewish.

Beethoven’s music could be described as German because of his German cultural experiences and in a similar manner my music cannot escape the influence of the rich history of the Jewish people because this is also my history. The strongest influences over us are often the ones that are unconscious and complex and art is universal because as human beings we all share the same questions, doubts, fears and hopes.

How do you deal with people’s expectations about your work, having reached recognition as a composer at a young age and it being publicized so much? Is it stressful for you and is there a lot to live up to? 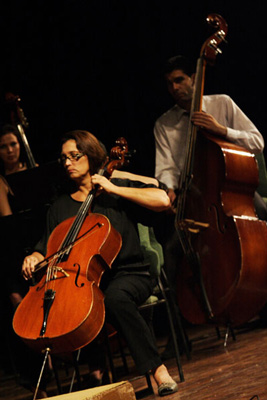 I am very happy to have my music often performed and appreciated. It is a great joy for me to have so many wonderful performers play my music with enthusiasm and I am moved by the warm reception I receive from the public. Having said that, even when I am already overloaded with commissions any new challenge is always welcome!

The real stress for me is the white page. I am always aware that not even the highest genius can write only great works! And so I cannot count on my previous compositions to guaranty the beauty of the piece I am about to start to compose.

What was your first reaction when you heard that your “Concerto for violoncello and string orchestra” would be performed in Cuba, thus being your introductory card to a country where your music wasn’t yet known?

I jumped up and down, excited and happy and went to tell my wife straight away the good news! We were dreaming of coming to visit the country at that occasion but it was unfortunately not possible. I hope to come to visit in the near future.

What do you know about Cuban music, musicians and composers?

I cannot claim to know enough about Cuban music and musicians, but I have been incredibly impressed by the performance in Cuba of my cello concerto. It was wonderful to work with the Cuban cellist Makcim Fernandez Samodaiev and I was delighted by the conductor and the orchestra. I feel that this is just the beginning of a wonderful exchange.

In our official press a critic described your concerto as “formally aged and disappointing” (though the execution was praised). Taking into account the fame you have already reached in Europe, Japan and the United States, how does this affect you?

Of course hard criticism is painful but, as similar things have been written about Brahms in the past, I try to understand the reasons why some critics do not perceive the originality and novelty of some music, and endeavor not to take the words too personally.

My guess is that it is possible to have a preconceived idea and expectation of what should be “new”. One could easily fall into the trap of feeling proud of welcoming a “new” work without noticing the incompatibility between the novelty and the expected. I sometimes feel that it would be useful to visit several of the Music Academies, listen to what the majority of composition students write there and realize that by definition this majority can not be the “new” or the avant-garde! My belief is that it is not necessary to write a piece for twelve trombones and one clarinet to be novel. The real renewal of the language is elsewhere.

Having said that, I think that music criticism is important and can create discussion and evaluation of ideas. Your interesting and pertinent questions have forced me to clarify my ideas, ask myself some new questions and re-evaluate my positions on these interesting topics.

Even though opinions about Mr. Borenstein’s piece were divided, there will be more performances of the “Concerto for violoncello and string orchestra” in Cuba.