HAVANA TIMES, April 11 — Guitarist and lutist Efrain Amador Piñero, now 65, is credited with having the academic study of the island’s indigenous instruments, ones like the lute and tres, accepted into art schools in Cuba. “I consider it unfair when an instrument is separated from the genre that it represents,” he commented.

HT: As an artist, what did it represent to have been trained so closely to the energy of the now-deceased maestro Isaac Nicola, one of the greats of Cuban culture?

Efrain Amador Piñero: To me, Nicola was a model in every way. It was to the point that in the depths of my feelings, the images of my father and of him became blurred and were integrated into one sole person. Even after I graduated, his influence on me was so strong that before making any decision I would first think: What would Nicola have done in a similar situation? I thought about his advice, his teachings and his ways of looking at life and music so that I could then subject everything to a kind of “Nicolian” analysis and then act accordingly.

HT: You were born in Ciego de Avila Province in 1947. Do you still have memories of your origins, before you reached the capital?

EA: When I was born in the community of San Joaquin, on the northern border between the towns of Falla and Chambas, in the municipality of Moron, at that time belonged to Camaguey Province. Nevertheless today it’s in Ciego de Avila thanks to the new political and administrative division the country.

Not only do I still have my memories of San Joaquin, but that little corner of the world — which rarely appears on Cuban maps — has always been the purest source of inspiration for all the works I’ve created for guitar, tres, lute and other instruments in chamber music, large symphonic formats and in choral music. As my wife Doris Oropesa expressed in one of her sweetest poems published in her book Verso Peregrino (Pilgrim Verses): “Childhood never leaves us, its lightning illuminates our old hideaways and dreams, and forever brightens our lives…”

I think that all that we are today, after the passing of several decades of artistic and professional life, was already formed – like the genetic code of what we were always going to be. The music was already hanging in the air, floating around us. All we did was reveal it.

HT: Prior to your coming along, were there artistic traditions in your family? Tell us what led you to decide on this profession.

EA: The truth is that no one in my family before me was a professional musician. However musicality, the poetic sense of spontaneous improvisation, singing in decimas, the sense of humor and drama of actors, those qualities that can produce a writer or a painter, those did indeed exist among many of my relatives on both sides, maternal and paternal.

What happened was very simple. At that time it was very difficult to cultivate art and make a living on it. One of my sisters was a light-lyric soprano who I loved to listen to back in my childhood. She also liked to write romance novels and poems, and to design dresses and all sorts of women’s clothing. Another brother of mine went on to play in a philharmonic orchestra and sang with a remarkable sense of pitch. Similarly, some of my cousins became outstanding artists in the worlds of the visual arts and dance.

I remember an uncle of mine who played the accordion surprisingly well, and another who was a script writer for the radio, an actor and a decima singer. Many years later when I visited the Canary Islands, the land of my ancestors, I met other family members who were incredible musicians – some had even studied in conservatories. In my case, ever since I opened my eyes to the world and could hold a pencil in my hand, draw, read and write, I’ve had a creative life. I started writing songs as early as 11, which was when I put my hands on my first instrument, a tres, and later a guitar.

In 1958 we moved to a farm called “La Aguadita” near the province of Sancti Spiritus, and it was there that I began to develop my musical talent within campesino groups and by playing in whatever fiestas that might have been thrown. I’ve been made a prisoner to this music as well as these instruments ever since. 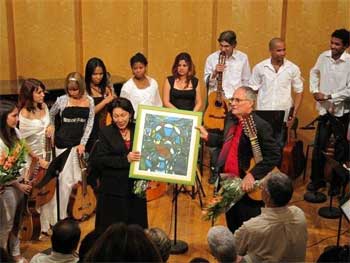 HT: It seems the Amador family name has been passed down from you to new generations of musicians.

EA: Well, in Cuba and there are now some other musicians named Amador. My two daughters are graduates from the Superior Institute of Music (ISA). The first, Ariane Amador Oropesa, is a pianist, tres player and a composer who has won international awards. She’s a jazz musician, an arranger and a band director of popular groups as well. Each year she becomes the soul of the “Song Contest” in the Havana municipality of Guanabacoa, and right now she’s a member of the Amanecer Chamber Music Trio, along with my wife and pianist Doris Oropesa.

My youngest daughter, Amanecer Amador, is a recent honors graduate in the specialty of the lute. She’s currently a teacher of that instrument and the Tres at the conservatory that we founded.

My grandchildren are also students of music and I hope that this continues for generations with all of the students we have trained over the last forty years of teaching.

HT: What has the chamber music format of “Amanecer” meant in your renowned artistic career?

EA: What began in 1970 as a guitar-piano duo then called “Oropesa-Amador” allowed us in 1983 to include the campesino lute, and two years later the Cuban tres. With this project we were able to enjoy wonderful experiences in many regions of the world showing off these national instruments, composing or adapting a lot of music for these combinations.

This was especially so around the island, where we investigated the music that was created earlier by our best popular artists on both instruments, though primarily the lute, which had fewer and fewer players and was a great tradition in danger being lost.

I can say that in doing this work and trying to increase our repertoire, life itself led us to create studies, pieces, chamber works and even concertos for the tres and lute as well as orchestras.

We realized that it was necessary to introduce academia to those instruments, which are roots of our cultural identity but had been unfairly neglected. They were being put to the side as supporting actors when they were qualified to be soloists, main figures, not only as companions to popular music but in the most elaborate and artistic music.

Because of this we founded the first center for mid-level studies in the lute and tres at the National School of Art (ENA). Later we founded a degree program for both instruments at the Superior Institute of Art (ISA), and in 2009 we formed a center at the elementary level to complete the programs offered within Cuba’s national education system. We added all of this to festivals and contests in these specialties, and by 2003 we had already instituted the event called “Plecto-habana,”which continues to take place biannually.

HT: As the creator and founder of the Cuban school of tres and lute, you faced setbacks and disagreements in the beginning around your idea of including a purely national instrument in the academic program of music on the island, given the instrument’s history and sonority, which is quite different from other conventional instruments?

EA: We’ve had many difficulties, but also many joys. It’s difficult to extend the image of an instrument, develop it or make its new properties known. I always quote from the Bible the passage “Can anything good come out of Nazareth? I consider it unfair when one separates the instrument from the genre it represents. This would be correct if we were talking about instruments that had little chance for development, but our research shows that the tres and the lute have great possibilities in world music. They have new timbres that refresh an approach for aesthetically characterizing this new 21st century.

HT: Nicaragua has special significance in your career. In addition to being the first country you visited with as a part of the “Oropesa-Amador Duo,” you also premiered a work by a composer from that nation.

EA: During that trip and after the premiere in Managua’s Ruben Dario Theater, where the widow and children of composer Abraham Delgadillo attended, we were invited to his house where they handed us a book of sheet music with works for violin and piano as well as songs by that master. We were therefore able to learn more about the path of this Nicaraguan creator and about his travels to Havana. We found out that he had been invited to perform by one of the greats of our culture, Amadeo Roldan. We even saw photos of maestro Delgadillo directing his works with our own philharmonic orchestra at the Teatro Auditorium, today the Roldan Theater.

The world premiere of this concert conducted by maestro Delgadillo had occurred in Havana years earlier but it had never been performed in Nicaragua. This is why in 1987, when it became time to celebrate its centennial, we were invited back to perform concerts for a month and to perform along with the Managua Symphony and the Matanzas Symphony, which was directed by the Brazilian conductor Pablo Buitrago.

In the recitals of the duo, we interpreted some of those works that were donated to us by the family. During the concerts performed during both visits, my wife Doris wrote several poems that were presented in the recital halls of various cities and were received with as much emotion as the music itself. As the duo’s first tour in a foreign country, we hold deep feelings for Nicaragua; it’s like an extension of our love for our country.

HT: Who has Aitana Alberti been for the work of the Amador family work?

EA: We met Aitana in 1999 when she was looking for ways to perform her father’s work: “Invitation to a Sound Journey,” a cantata for three voices, originally written for lute, piano and a reciter. Finding her was wonderful because then our consolidated duo allowed us to tackle a poetic musical work of this magnitude, and we were able to present it in Cuba very successfully.

This work is extremely beautiful and we have always been accompanied by Aitana Alberti in performing it throughout Spain and Latin America. In 2002 we recorded a CD of this work at Ojala Studios. It’s now been 12 years of working together. In addition, this union allowed us to assess and study the life and work of Don Rafael Alberti, which has nurtured us enormously.

HT: So you can say you’ve lived between strings?

EA: I live between strings and I’ll continue living there because its tone has become the most authentic form of expression in the work I’ve undertaken. The purpose that has marked my life is to develop these instruments as voices of the new century, and to leave established educational programs at all of its levels of instruction. If I at least achieve this, as is now is happening, then I think my life will have had meaning.