HAVANA TIMES – Not everyone in Cuba has managed to navigate this COVID-19 lockdown without stress, especially those who are looking after their elderly parents. Ivon Camacho Aquila (47 years old) has seen her life turned upside down, and she doesn’t know how long this will go on for.

HT: Could you tell us how you became depressed? 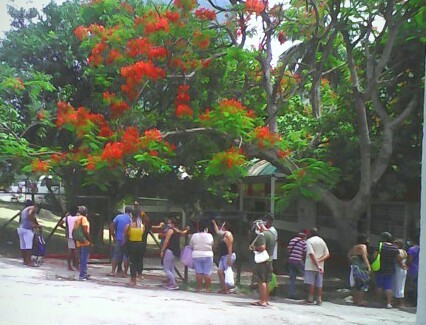 Ivon Camacho: That’s a never-ending story. I am sure that it has been building up over months now. We had already been experiencing shortages before the pandemic reached Cuba, but you could at least go to the agro-market and buy some root vegetables and beans, and there were pretty much always sausages, minced meat or chicken in stores. Weeks have passed now, and both markets and stores are empty, and when something does come in, everybody is desperate.

I live in a residential complex of apartment buildings, just a block away from the nearest store. Neighbors take their place in line very early in the morning. Some don’t sleep, or let others sleep. In the beginning, we didn’t know what the all the noise was about, but I went to look for bread before 7 AM one day and I ran into a km-long line. I believe that’s when my depression began.

HT: Did you join the early morning line?

IC: I didn’t have any other choice. I fought against this impulse for weeks, but when my supplies at home threatened to run out, I couldn’t find another solution. Only I know how hard it was to take this step. I went to different stores all over the town, and lines were huge even though I was getting to them really early in the morning. I’d stay until noon sometimes, hoping I’d be able to get in, but the few times I managed to, products ran out before my turn. If I had been living alone, I wouldn’t have minded eating anything, but my parents are now in my care… One day, I prepared myself mentally and went down to take my place in line, not knowing that my sacrifice wouldn’t always be compensated.

HT: Do you mean to say that in spite of taking your place in line early in the morning, and still didn’t get what you needed?

IC: There were times that there wasn’t even enough chicken for the first 100 people in line. In other lines, news would come at 10 AM that the truck that was supposed to be bringing in the supplies, wasn’t coming. Things would get really intense a lot of the time, because people get desperate. However, like Cubans always say everything and what’s between the lines: many people speculated that sales assistants were putting products aside for their own homes, and even if that were the case, the main problem is the shortages of products.

HT: Have the police intervened to ensure physical distancing and to prevent violations?

IC: Yes. The police sometimes help to calm down the nervous atmosphere, but people are always unhappy. It’s really shocking to go back home empty-handed after lining up for hours. I don’t know if they were doing it at every store if there had been a formal complaint, but when it was announced that we couldn’t line up at night, police patrol cars began to go around the block, and people would run to hide themselves in stairwells. Luckily, I’d take my place and then go up to see my parents.

It’s an outrageous situation. I also can’t understand why a board hasn’t been placed outside with the products that are on sale. The President and the Minister of Trade have said this on TV, over and over again, but at some point, the chain of responsibility breaks. The most logical thing would be for people to know the day before if a truck is coming in with supplies or not.

Whichever way you want to look at it, it’s an utter lack of respect and consideration. Even if the truck arrives in the afternoon with refrigerated produce, the most natural thing would be to tell people, but this hasn’t been happening either.

The same has happened with personal hygiene items. We haven’t had deodorant at home since March, and I’ve only been able to buy detergent once. I have had to use hand soap to wash clothes. The soap sold at the bodega store isn’t enough. My father wets himself before reaching the toilet, a lot of the time. It’s all a great contradiction. You have to change your clothes and wash your hands all the times, but there aren’t enough personal hygiene items on the market.

Then, you have to listen to the gossip that people taking places in line early in the morning are resellers and hoarders. I don’t believe that many people are out there buying to resell right now, much less if they are only selling one product per person and the police are asking to see ID cards, so that you don’t buy more than once and there is supposed to be enough for everyone. Many people prefer to believe this hoarding theory before accepting the fact that many people are in need.

HT: So, you haven’t been able to buy food?

IC: One time, my neighbor marked my place in line for me, and after six hours standing under a scorching sun, I managed to buy a packet of chicken. A real odyssey. Some days later, I just happened to manage to buy ham and chorizo in the Buena Vista neighborhood. It was a good long walk, and it was worth it.

HT: Do your parents have special dietary requirements or can they eat everything?

IC: We all have high blood pressure, heart problems and high cholesterol in my family. But given the current situation we are in, we have to eat whatever we can find.  I haven’t been able to buy vegetables, and fruit is really expensive. My father’s pension and my wages (which is only at 60% right now) don’t allow for much, I have had to work magic.

HT: What do you think about people who sell places in line?

IC: I believe that you have asked the wrong person. I am fed up of criticism, of these people who sit and watch but don’t really see anything. Selling places in line is another way of surviving. It’s really easy to reproach others when your fridge is full. Have they ever asked themselves, why would somebody get in line at the crack of dawn to then sell their turn?  The answer is very simple: with that money and a little extra, this person (who is normally a woman and not very young) can buy something that her kids need.  If I could, I would be the first person to pay for this place in line and help her out. 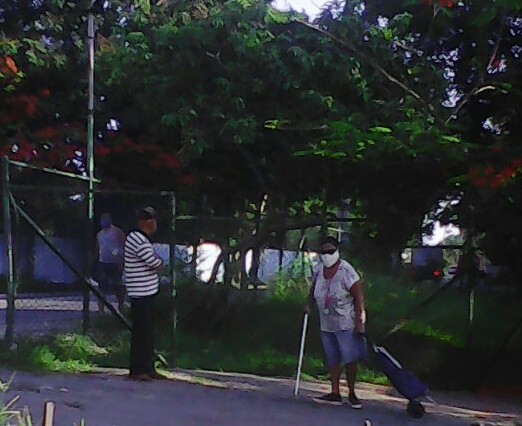 HT: Being in the same place for so long must be exhausting. What are you feeling when you are in line?

IC: First of all, outrage, then sadness. I get anxious seeing so many people in need and desperate, always talking about the same thing.  Sometimes, I distance myself. But I have realized that if I talk, time flies faster and I don’t have to think. The truth is that it pains me to accept that we can’t free ourselves from these shortages. If it isn’t because of the blockade, it’s because of the Berlin Wall being knocked down, or a hurricane, and now they have COVID-19 to add to the list.

All of this has led to awful tummy aches, not to mention that I am always grinding my teeth and my jaw hurts. But that’s not all: when I’m not depressed, I’m annoyed. I have a friend who complains that we only talk about food, and the sad thing is she’s right.

HT: Do your parents know about all of these shortages?

IC: They know that there are shortages, but I don’t make them suffer with lines. Before COVID-19, they were both more active. They went to buy bread, pick up some of the rationed products, and they went to a stall to buy fruit and vegetables. I always took care of the rest.

They have been in social isolation since March, and the lack of activity has made them slow. I have to help them have a shower, a lot of the time. It’s lucky they get on well, they are always looking out for one another.  I try and come back with a smile on my face so they don’t worry, and if it takes me really long I try and come up with an excuse. If they knew that I was spending all of that time standing in line, I’m sure they’d offer to help and it’s better they stay at home, protected.

HT: Do you believe you can hold out much more with this constant stress?

IC: I would like to open my eyes in the morning and not have to look at the clock.  Have enough time to enjoy a sunset again, water my plants and listen to music without any cares in the world. But I can’t, I have responsibilities.  I have food for now, but the detergent and soap is running out. I don’t have beans and the rice I have left isn’t enough for the whole month. Shortages won’t end with the pandemic, they are going to get worse, and I will continue to do what I’m doing now. I have the image of the white truck bringing in chicken imprinted on my pupils, I can even see it with my eyes closed. I dream about it, and the worst thing is that I don’t realize when I asked who was last in line.