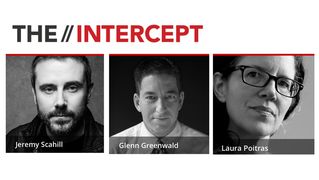 He was previously a columnist at The Guardian newspaper. Scahill is producer and writer of the documentary film “Dirty Wars,” which is nominated for an Academy Award for Best Documentary Feature. “We are really about a journalistic ethos — which is not doing things like helping the U.S. continue its targeting of U.S. citizens for death, but by being adversarial to the government,”

Greenwald says. “Telling the public what it ought to know, and targeting the most powerful corporate factions with accountability journalism.” Greenwald and Scahill founded TheIntercept.org with filmmaker Laura Poitras.

This is a rush transcript. Copy may not be in its final form.

AMY GOODMAN: Let’s talk about The Intercept. Glenn, talk about the launching of this new website today, together with Jeremy and Laura, what you’re doing with The Intercept, what your plans are.

GLENN GREENWALD: Sure. So, you know, it was only, I think, four months ago or so that we first had conversations with Pierrre Omidyar, who is the publisher of the site through First Look Media, about working together. Jeremy, Laura and I were off in one corner planning our own media site, and he was off in another planning his, and we realized that we could work together effectively. And we ended up getting launched in a very short period of time, relatively speaking, when you’re talking about launching a new media outlet, in part because we feel a serious obligation to get up and running so that we can report on the stories like the one that we reported on today and all of the rest of the stories that come out of the archive of documents that our source Edward Snowden provided to us, as well as other sources that we’re now developing.

And so, we intended to start with a fairly limited function, although one that’s profoundly important, which is to give us a place where we can aggressively report on these NSA documents. There are many, many, many more big stories left to report. And we’re thrilled that we get to work with each other and an amazing team of journalists that we recruited. And then we’re going to start slowly and inexorably expanding the range of topics that we cover. We’re really about a journalistic ethos, which is not doing things like helping the United states government continue its targeting of U.S. citizens for death, like AP just did by withholding information allowing it to continue, but by being adversarial to the government and telling the public what it ought to know, and targeting the most powerful corporate and political factions with accountability journalism. And we’re thrilled that we get to work together, that we have a new media outlet that is devoted to these principles, that we have the resources to protect our sources and enable the journalists that work with us to do the kind of journalism that we think is so sorely lacking.

JEREMY SCAHILL: Amy, can I add to that?

JEREMY SCAHILL: Right. You know, what we’ve seen also in—over the past month is a very serious escalation in the threats coming from the Obama administration and coming from Capitol Hill against journalists. There is this attempt on the part of the Director of National Intelligence James Clapper to imply that the journalists who are reporting on the Snowden documents are accomplices to a crime. My understanding, from a confidential source in the intelligence community, is that Clapper, two weeks before he publicly used that term of accomplice, that he also said that in a top-secret classified briefing within the intelligence community, sort of floating it. You know, Mike Rogers also has just been on a rampage against journalists, also against Snowden, making totally unfounded allegations about Snowden being somehow a Russian agent or cooperating with Russian agents. And so, the timing of this site and why we felt it was so urgent to start reporting on these stories right now is to push back against this climate of fear and to say that we, as independent journalists, are not going to back down in the face of government threats, that in fact this is when it is most important to stand up for a truly free and independent press, is when those in power start to try to, you know, push their fists down upon you.

REP. MIKE ROGERS: There have been discussions about selling of access to this material to both newspaper outlets and other places. Mr. Comey, to the best of your knowledge, is fencing stolen material—is that a crime?

JAMES COMEY: Yes, it is.

REP. MIKE ROGERS: And would be selling the access of classified material that is stolen from the United States government—would that be a crime?

JAMES COMEY: It would be. It’s an issue that can be complicated if it involves a newsgathering, a news promulgation function, but in general, fencing or selling stolen property is a crime.

REP. MIKE ROGERS: And if I’m hocking stolen classified material that I’m not legally in the possession of for personal gain and profit, is that not a crime?

JAMES COMEY: I think that’s a harder question, because it involves a newsgathering function, could have First Amendment implications. That’s something that probably would be better answered by the Department of Justice.

AMY GOODMAN: House Intelligence Committee Chair Mike Rogers questioning FBI Director James Comey. Glenn Greenwald, you were not named specifically during the hearing, but Politico reports Rogers called you a thief after the hearing ended. He reportedly said, quote, “For personal gain, he’s now selling his access to information, that’s how they’re terming it. … A thief selling stolen material is a thief,” said the head of the House Intelligence Committee. Your response?

GLENN GREENWALD: Well, first of all, Mike Rogers is a liar. He is outright lying when he says that I or any other journalist working on this case have sold documents or fenced documents. The one thing that’s missing from his accusations is any evidence, because none exists. And I defy him to present any. But that’s what Mike Rogers does. It’s who he is. He just lies and smears people, with no evidence.

But I think the more important point than the fact that Mike Rogers is a pathological liar is the fact that this is part of a broader campaign on the part of the Obama administration, as Jeremy said, to try and either threaten journalists that they will be criminalized or outright criminalize them by prosecuting us for the journalism that we’re doing. It comes in the context of this coordinated campaign to call us accomplices by President Obama’s top national security official. Keith Alexander, two months ago in a speech, raised this idea of selling documents. When we did our first report in Canada with the CBC, the right-wing Harper government attacked us as having sold documents to the CBC. And so, what you’re really seeing is the Obama administration has been worse on press freedoms than any president since President Nixon, as James Goodale, the former New York Times general counsel, has said, and is actually approaching Nixon and getting worse, he said.

And I think this most recent escalation is showing that they’re not content to just go after the newsgathering process and also their source—our sources, but also to start threatening us with criminality, with prosecution. And if they think it’s going to deter us in any way, they’re sorely mistaken. But it is a very serious thing when the top level of the U.S. government starts accusing you of criminality for the journalism that you’re engaged in.

AMY GOODMAN: Glenn Greenwald, you’re speaking to us from your home in Rio de Janeiro, Brazil. You’re an American citizen. You haven’t come back to the United States since the release of the documents by—information, articles based on the documents of Edward Snowden. Do you plan to come here? Are you concerned about being arrested?

GLENN GREENWALD: I do. I do plan to come there. Neither Laura Poitras nor I have returned. She’s in Berlin. And we’ve been advised by numerous people that it wouldn’t be a good idea to, that the risk of something happening is certainly more than trivial. And so, the U.S. government is also refusing to give us any indication about their intentions, despite being asked many times by our lawyers. They obviously want to keep us in a state of uncertainty. And this recent escalation of rhetoric and accusations obviously makes that concern more acute. At the same time, just on principle, as an American citizen, I refuse to be kept out of my own country for the crime of doing journalism. And so I absolutely will come back. I’m going to pick the time to do it when I feel I understand the risks and am as protected as I can be. But under no circumstances will I allow this intimidation campaign to succeed either in deterring me from doing the journalism I do or returning to the country of which I’m a citizen.

AMY GOODMAN: And, Jeremy Scahill and Glenn Greenwald, if you can comment quickly on the other piece that has launched at TheIntercept.org today, the new photos of the NSA and other top intelligence agencies revealed for the first time, by Trevor Paglen, who did the photography.

JEREMY SCAHILL: Yeah, I mean, Trevor Paglen is an amazing journalist in his own right, who has documented a sort of secret world using images for a long time. He has had another project where he was looking at patches of all sorts of covert signals intelligence units. And these photos really are provided as a stunning public service, and they are the freshest images that we have of this architecture of secret organizations, and, in some cases, the only images really available to the public. And so, we’re really excited that Trevor worked with us on that and that we can publish them on TheIntercept.org.

AMY GOODMAN: The final quote—and we are showing those images, but you can go to democracynow.org, as well—of your piece, that has just launched today, of President Obama, Jeremy?

AMY GOODMAN: We have 20 seconds.

JEREMY SCAHILL: And he told his aides at one point that he had become remarkably effective at killing people, and said, you know, he didn’t—he didn’t see that one coming. Well, it’s true. He has become good at killing people. It’s just, who are the people that they’re actually killing?

AMY GOODMAN: The exact quote, President Obama quoted by _The Huffington Post, saying, “Turns out I’m really good at killing people.” The president added, “Didn’t know that was gonna be a strong suit of mine.” Jeremy Scahill and Glenn Greenwald, congratulations on the launch of TheIntercept.org at First Look, co-authors of the new piece, “The NSA’s Secret Role in the U.S. Assassination Program.” We’ll link to it at democracynow.org.