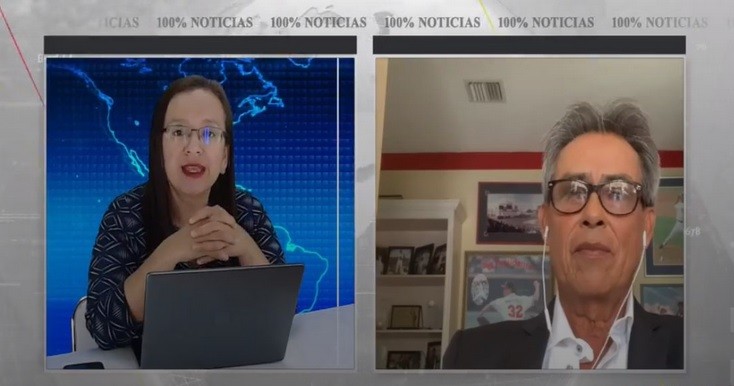 The pride of Nicaraguan baseball states that he “couldn’t care less” about the possibility of having his name removed from the Nicaraguan national stadium.

HAVANA TIMES – Dennis Martinez doesn’t consider himself a “politician” nor does he aspire to any elected position, much less as a presidential candidate.

“Absolutely not, I’m not a politician”, the pride of Nicaraguan baseball stated during an appearance with anchor Lucia Pineda Ubau on the program 100% Entrevistas [“100% Interviews”] on Friday, February 21.

He did, however, say that he was focused on promoting new elections in Nicaragua that would be fair, clean and transparent in order to recovery of democracy and the rule of law, which in turn would bring a total change and real peace to the Nicaraguan people.

“I think we’re doing the right thing, which is demanding our rights, demanding what the people are asking for: electoral reforms, an institutional change in the Supreme Electoral Council, so that it be independent, as it should be, with elections moved up or in their scheduled period, which according to the Constitution is 2021. They should be clear and transparent and be supervised by the international organizations to give them credibility. That’s playing fair,” Martinez explained.

In terms of the campaign initiated by sympathizers of the regime to change the name of the Nicaraguan National Stadium, which currently bears his name, calling him a “sell-out”, he said that he “couldn’t care less” about such a possibility. “That’s something material,” and he’s focused on struggling with the people to recover the peace.

“At one time, I received [the news of my name on the stadium] with love, with pride, with prestige, as a great tribute that was being paid to a person who had earned it from the point of view of sacrifice, dedication and representation on an international level, and was grateful at that time to the government for that pronouncement. But I also issued my own statement when I saw images and photos of what was happening in April 2018 and learned of the things that were occurring there in our country,” Martinez said.

He also believes that there’s still time for Ortega to change and repent, but he kept to himself the message or words that he’d give to Ortega regarding the repression unleashed against the Nicaraguans.

“That’s something that I reserve for myself.  If the moment came to tell him, I’d like to do so in person, but very likely it’s not going to be possible. I wouldn’t like to make it public,” Martinez stated.

Dennis considers himself a faithful Catholic and has admired the work of the bishops and their priests on the side of the suffering people. He invited all the Nicaraguans to pray with their families to achieve the peace that Nicaraguans desire.

For our readers who can understand Spanish here is the complete interview: