HAVANA TIMES — Felix Arguelles is a licensed taxi driver. Seeing him at work, one would never suspect he studied 10 different foreign languages, let alone that he holds a bachelor’s degree in social sciences, history and economics.

Arguelles is a highly cultured man with a profound knowledge of Ernest Hemingway, being a passionate reader of the author of In Our Time and Green Fields of Africa.

Felix ArguelIes: I still have a lot to learn. Hemingway made a deep impression in me in junior and senior secondary school, the great man he was, intrepid, courageous and anti-fascist. He’s been a paradigm for me as a revolutionary.

The connections between Hemingway and Cuba are many. All of this has inspired me to study him in depth. Every year, I attend the conferences about his life to get to know him and his work better.

Arguelles, who was also a diplomat, a major at the Ministry of the Interior and university professor, explains how he came to be a taxi driver.

FA: At the end of all this, I went down the tourism road, first with Taxis OK and then with Cuba Taxi. I am now in the process of retiring, but I continue to offer taxi services with my own car. I have four kids and two grandchildren to maintain. As Lenin said: “The economy is, at root, the most important thing.” That’s why I became a taxi driver..

This taxi driver has an area of specialization, which he claims to be that of city tours.

FA: We drive around the city in my car. We tour Havana and the old town, and I offer tourists a geographical, economic, political and social summary of Cuba and its capital. 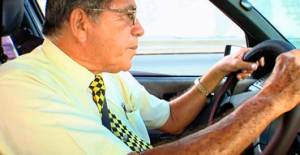 I am also an expert on Hemingway matters. We visit the places in Cuba that this American novelist frequented. The tour includes an obligatory visit to his home, the Finca Vigia museum, to Cojimar, where he became inspired to write The Old Man and the Sea, the Ambos Mundos Hotel, his first place of residence in Cuba, from 1932 to 1939, La Bodeguita del Medio and El Floridita restaurants. The tour concludes with a visit to the Hemingway Marina.

Another of my areas of expertise are Cuban culture tours that include a visit to the National Fine Arts Museum, the Hamel alley (a reservoir of Afro-Cuban culture), Chinatown, the Colon cemetary, the buildings that are most representative of Havana’s different architectural styles (neo-classic, colonial, Art Nouveau and Art Deco).

Does Felix work with any agency?

FA: I work mainly with the different hotels that know of these tours and call me. Some satisfied customers recommend us to others and we are contacted directly also, through our website or email.

I generally work alone, but, when we have many customers, I rely on a group of 10 friends who are foreign language graduates with university degrees. They are all serious, decent and honest people.

All the while, Arguelles remains behind the wheel of his car. Every day, he makes his dream come true: to drive his taxi, talk about Hemingway, Cuban culture and, to top things off, get paid for it. What more could this Cuban taxi-driver want?