HAVANA TIMES – The Helms-Burton Act has now been fully implemented, 23 years after it was signed. President Trump lifted the waiver on Titles III and IV, which relate to property confiscated by the budding Cuban Revolution, which were later subject to foreign investment.

Politicians, plaintiffs, defendants and journalists are all speculating on the real scope of this legislation, which is why we have asked several experts for a somewhat medical examination of the “Cuban Liberty and Democratic Solidarity (Libertad) Act”.

We interviewed two economists, Paul Michael Meo* and Elias Amor Bravo*, in order to learn more about the possible repercussions of Title III of the Helms-Burton Act finally being implemented.

Paul Meo: (PM) The direct impact of these new measures isn’t very important.  The current situation in Venezuela is a lot more important for Cuba, for example.

Elias Amor Bravo: (EAB) The consequences will be felt in the long-term, for investments that have been operating on the island with assets that were once confiscated from their legitimate owners. Private schools and universities (which are now public) won’t be subject to lawsuits, as these kinds of institutions were exempt from foreign investment, just like everything to do with the health or defense sectors were. Lawsuits need to be filed in US courts and I have a feeling that there won’t be any immediate rulings. In the meantime, foreign companies will continue to operate in Cuba.

PM: Foreign business owners who accepted high risks are now well-established in the country, I believe that they have prepared to deal with this situation.

HT: Even though the law targets Cuba’s totalitarian system, it only works as it should in the US. The judicial system linked to property is very complex in itself, plus it doesn’t respond to a party or government’s political interests.

PM: As a claimant, I would tell my government: “Thanks, but no thanks”, because just filing a claim costs you US $6,500, then you have to pay lawyers and for recovering property deeds, for example, it will cost some $12,000 for a property worth $50,000, without taking its state of repair into consideration.

HT: How far will the enthusiasm of these “Cuban-Americans” take them, after six decades?

PM: Immigration peaked many years ago. Later floods of migrants haven’t been as successful in economic terms. Current surveys show that third generation “Cuban-Americans” don’t really want to return to Cuba if the government were to change. Many years have passed, which is why there won’t be lots and lots of lawsuits.

HT: Nevertheless, is there a starting premise for these claims?

EAB: We have the so-called Laws 890 and 891 which lists the names and social purposes of all the companies that were seized after October 13, 1960 (which you can read about here: http://www.latinamericanstudies.org/cuba/expropiacion.htm)

HT: When rulings are made, can we talk reliably about prices, 60 years later? The University of Valencia professor recognizes that there isn’t an easy answer, given the parity between the USD and Cuban peso in 1959, but he doesn’t desist from giving us an answer:

HT: Last but not least, if some owners were to receive a favorable ruling, money would be its name. The Cuban government has its Law No. 80 of 1996 to fall back on, which declares the Helms-Burton Act and its dispositions to be void. The Europeans, within the EU, have their current “blockade statute” in force against the US law. Spanish lawyer Jose Maria Vinals rubs salt in the wound:

“(The Helms-Burton Act) will affect defendant investors in Cuba, who have property, interests or bank accounts in the US, which could be seized.

HT: This is what the news has confirmed, with Carnival Cruise Lines now being sued, while Spanish hotel chain Melia is waiting for the bad, but not surprising, news. Experts also see other non-quantifiable effects, which are still very real. Academic Jaime Sushlicki, from the Cuban Center in Florida, summarizes:

“Some companies are going to get worried; they will realize that they can’t operate using these properties and will withdraw from Cuba. Maybe others will enter some form of agreement with the former owners of these assets, and anyone thinking about investing in Cuba will now take a step back.”

EAB: There’s no doubt that the decision to do business in Cuba, which has been difficult and ridden with problems up until now because of a lot of redtape and government policies, will now become a real nightmare.

PM: The hardest thing, though, will be a new democratic government’s efforts to clean deeds of military and state-led industries, or “cooperatives” and give these properties to the people! Good luck changing a fascist corporate system into modern social-capitalism!  This is Cuba’s challenge in the future, not the Helms-Burton Act.

*Paul Michael Meo: (80 years old) Graduated from Harvard in 1961, studied a Masters at Colorado University in 1969 and the Technological Institute of Massachusetts, 1971. He spent two decades working with the World Bank as an economist, supervisor and head of the Latin American and Southern Asia departments, Research and Programs. 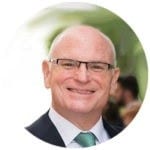 *Elias Amor Bravo: (Havana, 1958) Economics professor at University of Valencia, Spain. European delegate of the Association for the Study of the Cuban Economy (ASCE). His professional career involves management and direction of public administrations. Editorial Board Member for “Revista Hispano Cubana”, and he also writes the blog Cubaeconomia. In 2010, he published Economia cubana: La oportunidad perdida.