HAVANA TIMES — Tokyo-born Sayuri Yoshida has set up a small crepes and Japanese food establishment at the intersection of Aguacate and Obrapia Streets in Old Havana, drawing in more and more customers thanks to the distinction and variety of her menu.

The owner, a journalist and admirer of Cuba, has decided to open her own business in the country “before the Americans, who eat up everything.” She named the restaurant (“Crepe Sayu”) after her small daughter.

Sayuri and her little girl, the daughter of a renowned Cuban artist, have already settled into the habits and rhythms of this neighborhood in Havana, where they are loved and served by many.

Tell us about Crepe Sayu

Sayuri: When I bought a house here (planning to rent out rooms) I had the idea of opening “Crepe Sayu.”

I asked myself: “what could I do in Cuba?” Making certain foods here is difficult, you can’t always find all the ingredients.

So, I focused on what never foes missing: flour, eggs, milk. So, after asking myself what I could throw together with those things, this idea came along. 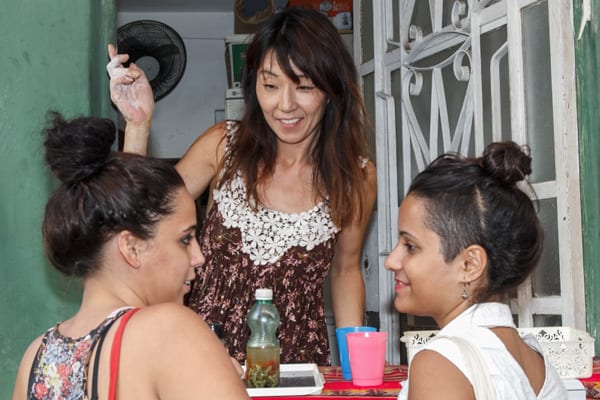 You can prepare crepes in Cuba. I’m not a professional chef. I’m a journalist. But a Japanese woman always knows how to cook.

Crepes can be either sweet or salty. They’re made of dough, like a taco, and you can prepare it with any kind of meat, eggs, shrimp or sweets.

At first, we tried selling them along the Malecon ocean drive, to know whether Cubans liked them or not, and we ended up selling a lot.

At another point in time, I realized there’s always plenty of sweet potato around and I started making sweet potato rissoles, in addition to the crepes. We use potatoes in Japan, but you can’t find potatoes all the time in Cuba. There’s a place where you can buy sweet potatoes in Japan also. I use my own ingredients (which makes the food taste different) and people, buy, do they buy it up! They also order takeaway.

Now, I am also preparing dishes with rice.

Since when do you live in Cuba?

Sayuri: Since around 12 years ago. I came as a tourist the first time. I had a project about Hiroshima and Nagasaki called “Atena Japan” and I published a book, donating about 10,000 copies to Cuba so that children here would learn about the atomic bombs dropped on Japan.

I fell in love with the island, I liked it a lot. I wrote a book about it. That’s when I met Nelson Dominguez, while interviewing him for the book.

He’s the father of my child. At first, I felt he was too old for me, but, a year later, I accepted him. He’s a good and very serious man.

We got married. I became pregnant and gave birth to a girl – Sayu Dominguez Yoshida – in Japan, because, at the time, I was working as a journalist there. Cuba didn’t give me a sense of security, I didn’t want to move here, because there are no diapers or milk here, and everything seemed hard to me. It was easier for me to raise my child in Japan. I also didn’t speak Spanish very well.

Nelson and I separated about three years ago. However he really looks after my daughter! He’s a good father. He always looks after her on Saturdays and Sundays.

It wasn’t convenient for us to live here at the time, but, when my girl started at preschool, we felt it was better to be in Cuba. I like Cuba for my daughter.

Things are easier on the island. Many people look after children, even the neighbors, everyone looks after them. They don’t do that in Japan.

In my country, if my daughter wants to play with a friend, I have to go and stay with her. Other parents consider it a huge responsibility, they don’t even want to touch someone else’s child.

I also like Cuba’s history, because of the revolution.

I don’t care whether its capitalism or socialism, what I like is the mentality of Cubans, the thought of Jose Marti and Fidel: living together, helping one another, not competing, I like things that way. Also, after the Second World War, Japan changed drastically, because the United States went in there and now, of everything we have there, half of it comes from the United States.

Japan doesn’t have many original things and it changed many others, but Cuba struggles against the United States. Cuba is poor, you can’t find many things, but…it’s amazing how people here live! The country has managed to survive through struggle.

How strong Cubans are! I feel respect towards them.

There aren’t many things here, but, over there, if something breaks, people throw it out and buy something new. Here, in Cuba, people find a way to fix things…it’s a smarter thing to do. I learned all this over time and have come to like it.

Cubans are smart. I’m a journalist and I’ve traveled to many, many countries. You can find just about anything in poor countries, but people have no education. Cubans were a surprise for me. They’re poor, but they’ve had an education, they’re smart. Cuba is a unique country, I like it a lot.

I want Sayu to learn from Cuba, so I became a Cuban resident and put my girl in school.

Sayu is now six. She’s already in the second grade. Everyone in Old Havana and everywhere knows here. She’s a bundle, a real bundle!

I run the shop during the school year and we vacation in Japan.

I have five brothers and four of them work with my father. That’s how they make a living, they run a business together. We’re two girls, and my sister is also a journalist.

Why did you start the business?

Sayuri: We had to set up a business, because I didn’t have money. 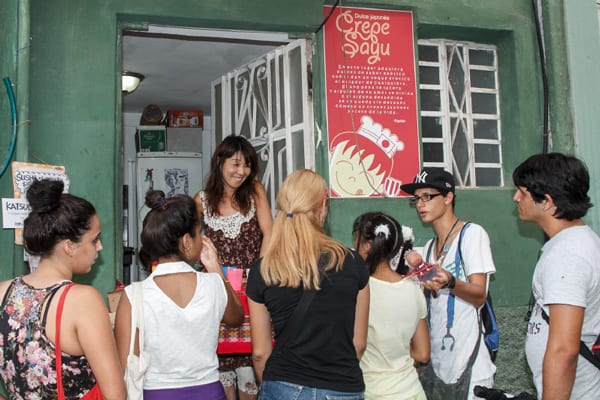 I have a license and pay taxes, of course. I employ two Cuban women. They each work every second day.

I’m the only Japanese woman in Cuba with a business like this. Other people have sushi restaurants, but the owners are Cuban.

The hardest part is finding the ingredients. You can find shrimp, lobster and octopus. The sweet potato rissoles and sushi are the most popular dishes, but the Japanese sauce I’m using requires many condiments that I can only buy in Japan.

I bring over the algae for the sushi, because you can’t find it in Cuba. I also bring over the wasabi. As for the rice, I use the local kind, but I don’t use oil to cook it. I also use the soy sauce they have here, if I can find it, but not too much of it…it’s too dark. Things don’t cook well with it, it isn’t very good – it’s too salty and doesn’t smell too good. It’s better in Japan.

The business is doing very well.

What’s on the menu now?

Some of these stuffings I use for the crepes are also served with rice and sweet potato rissoles. I offer shrimp, octopus or lobster sushi separately, as well as octopus Danburi. We have lemonade slurpees to drink.

HT: People seem to love the dishes at Crepe Sayu and the way you cook.

Sayuri: We have some regulars. Some had already developed a taste for Japanese food.

They say this sushi is very good and that they like it a lot.

Some like the food so much they come almost every day. There are some who have been coming ever since we opened and love the way “Sayuri cooks.” “It’s great, so well done!” They say.

A woman was telling me her daughter and son-in-law adore sushi and live in the US now. I’ll send them some pictures, so they know there’s a place like that in Havana now.

A Japanese woman said our rissoles are very good, that they’re different from the ones in Japan, in both shape and taste. The man with her, a Cuban now living in Japan, adds that the rissole has a bit of Japan and Cuba in it.

The business is going very well.

Sayuri Yoshida has one of the most authentic small businesses in Old Havana in terms of taste. And she is drawing more and more regulars. The establishment is open Monday to Saturday from 10 am to 7 pm. Sayuri’s email address is: [email protected]