HAVANA TIMES — “To me, choreography represents a manifestation of intimate and public rebellion. It also involves a service and a possibility of establishing contact based on memory and emotions,” said Laura Domingo in her interview with HT.

Dance on the island is finding young creators who are committed to innovative approaches to today’s choreography. Laura Domingo was nurtured by the National Ballet of Cuba and at the same time by the Danza Contemporanea de Cuba. In fact, she is the creator of works that today are included in the repertoires of prestigious companies such as these.

HT: Your academic training is in ballet, but your interests have shifted more toward contemporary dance trends.

Laura Domingo: I think dance includes any movement of the body that contains a reason in itself, an expressive charge. I not only studied ballet for nine years, but I still teach it, which has helped me to understand the body from an academic approach and under the requirements of this very well-codified technique.

Nevertheless, there came a point when I started to need other tools, not with the aim of staging choreographies but purely with an interest in learning. So, I decided to start taking classes, training and workshops with Danza Contemporanea de Cuba (DCC).

My proximity to this company made me discover other universes and to appreciate them comparatively with those with which I was already familiar. What’s more, DCC is a center that promotes one’s intellectual level during the staging processes with Cubans and foreign choreographers of various approaches.

This stimulated my interest in exploring other ways of understanding dance in Cuba and in countries like Germany, England and the United States, where there exist companies that are considered top notch. Gradually, this thirst for knowledge was also instrumental in the rigorous effort to profile my own autonomous language. However, the training I possess is still very much in its infancy. In this way I hope that ballet will only be the beginning or the platform of my career.

HT: Is there any particular event that determines your creative concerns in dance?

LD: The need to create possible universes. I try again and again to complete what is missing, what I haven’t experienced, what I’ve been deprived. To me, choreography represents a manifestation of intimate and public rebellion. It also involves a service and a possibility of establishing contact based on memory and emotions.

Overall this sensory interaction with others is essential for me. Moreover, although I often work based on classical and contemporary techniques, I prefer to make it clear that I see the leading role as being played by emotional discourse. But nor do I propose a sentimentalist dance, rather a dance that generates a plurality of readings.

HT: To what extent has giving ballet classes nurtured your choreographic development?

LD: The impulse may have come from far away, but there always existed something that brings it out. That happened during the ballet classes that I gave at the National School of Ballet, ENB. The link between steps and phrases made this game of composing come alive.

There was another subject material: character dances, which I came face to face with while creating. Ramona de Saa and Martha Iris Fernandez, the director and assistant director of ENB, were among the first people who encouraged me in this regard. A thank them for having confidence in me and for giving me the extra class time I needed to bring about the development of my mid-level students. They continue to be helpful.

HT: So, do you see yourself more as a teacher today or more as a generator of ideas evolving from choreographies?

LD: Both professions complement each other in me. There’s some teaching involved in the way choreographers relate to performers as they jointly embark on the search for the definitive gesture. Teaching also provides tools for the improvement of dancers and contributes methodological awareness, which are both essential in the process. 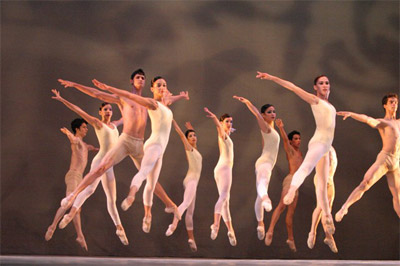 HT: Tell us about your experience with the National Ballet of Cuba.

LD: I’ve enjoyed working with the National Ballet of Cuba, BNC. In this case I won’t speak of chance; rather, I’ll speak of effort. The concept of the enlightened individual to me is a throwback to the nineteenth century. I have faith in stubborn determination and effort. I like working with BNC members because they have excellent technical qualities and this gives them the opportunity to express themselves in exquisite ways. They are dancers who can span the full extent of dance if this is offered them.

Often the dynamics of creating with them have a very intense pace due to the number of performances given by this institution every year. Because of this, having concluded a choreographic process within their ranks, there always remains in me a mixture of exhaustion and exhilaration.

This means a challenging glimpse of expressive possibilities, adjusting hundreds of details and leaving the work ready in the short time you have. I learned a great deal that way. Through “Igneos,” the first piece I staged with the company, I tried to capture the explosiveness that characterizes Cuban dancers through movements that — while based on classical ballet — strike a strong relationship with contemporary dance.

As for “Dulce es la sombra” — my upcoming premiere, with music by the maestro Guido Lopez Gavilan and designs by Jose Luis Fariñas — although it follows that same path, it contains greater contrasts between pure art and theatrical elements.

HT: What themes do you usually take refuge in to get to the specific idea of a work of art?

LD: I believe that human complexities will never fail to motivate, surprise, and seduce me. I didn’t set out to be a choreographer. If I’ve taken the risk it’s because there is always something that generates courage beyond the doubts. I’m attracted to ordinary Cubans in the face of their national and universal circumstances. I try to dig into our nature based on an all-encompassing vision.

The artist must be an intense observer of their surroundings, because there’s nothing more surprising and evocative than life. I’m often tormented by the possibility of losing or forgetting feelings, scenes and colors, which then drive me towards a new search. That’s why I also write.

HT: One can note repeated work with theater groups throughout your career.

LD: The theater has attracted me since childhood. When I was nine or ten years old I started in an acting workshop given by Professor Ana Maria Paredes at the Ballet Elementary School. Much later I joined a group called “Mascara Laroye” in addition to one called “Rita Montaner,” where I was a dancer and was able to participate in two stagings: “Bodas de sangre” and “Hamlet.”

Since then the closeness only increased and finally matured in Medellin, Colombia, in October 2011. In that city I came to understand the depth of the theatrical environment. There were excellent companies, ones such as “Deambulantes”, “Hora 25” and “Matacandelas,” to name only three. They somehow opened their doors to me, which made me so excited that I returned to that experience that defined my union as a choreographer and a trainer at the Gaviota Theater.

I enjoy working with actors because they develop an interesting worldview and are more suited to expressing it. This makes them very malleable. On the other hand, the word is a constant inspiration in my life. Actors know with great depth how much each word weighs and its significance, so when certain resources are offered to them they learn to dialogue with their bodies in a spontaneous and personal manner. 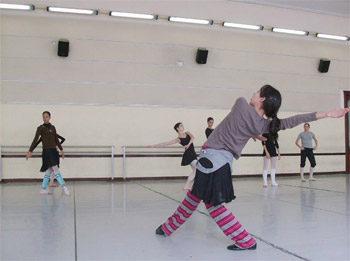 HT: It would be interesting to know your views on the current creative efforts that are flourishing in Cuba today.

LD: In general, I think people are emerging with interesting projects. This shows an effort to maintain the plurality of aesthetics in our environment. To me, it’s significant that there are always restless artists and that they create constantly effervescent motion.

I think we should understand each other from an international perspective and that this is sometimes difficult to achieve because of the difficulties of accessing certain media. However, there are always possibilities within arm’s reach and ones upon which we can capitalize.

We are a nation with a great vocation for art and creativity. Perhaps we lack a work ethic that’s more intense and sustained in the area of choreographic endeavors within the country. Without a doubt it’s the responsibility of everyone to strengthen this because if choreographers decline then the quality of our dance scene will tragically unravel.

In this same fashion, criticism should continue to choose to give orientation and encouragement to this work. Having experienced voices in journalism can save us from unfortunate falls into archaism and stagnation.

HT: Right now you’re given unlimited freedom to create. Tell us the idea you would like to materialize.

LD: The truth is I always make use of my freedom in the face of a new stagings because it’s essential for me. Perhaps in this sense I’ve been very lucky. But there’s no doubt that a project that I would love to pursue is to create a neoclassical work in Cuba with the music of Inti-Illimani. The rhythms of that legendary Chilean band echoed in me for a long time and I would enjoy leading it to other settings. I want to express myself from my island and as a part of Latin America.

I’m also captivated with further exploring the links between dance and cinema. Four months ago the directors Felipe Rodriguez Martinez and Nikolas Juerguens (from the International School of Film and Television in San Antonio de los Baños) and I did a movie in which participated more than twenty students from the National Ballet School. Right now it’s in post-production and we would like to present it as soon as possible in Havana. I also am looking towards the inclusion of videos that play a more protagonist role in my ballets.

HT: Literature is another area that you’ve explored.

LD: Words are my refuge. I’m interested in the written word, such as in the theater and when we dance to words. Therefore I’m devoting myself to this delicate task of creating on a forever thorny path. But I don’t consider myself a writer. My relationship with the letters is a self-taught endeavor. I graduated from the Superior Institute of Art specializing in ballet, and only in the last two years have I had an opportunity to pursue various graduate courses in the College of Arts and Humanities at the University of Havana.

That helps to give me guidance for deepening in certain subjects, though I don’t dedicate myself to literature with the rigor of a specialist; rather, it’s a continual and redeeming friendship. Writing is also an exercise that I practice alone, especially in recent months. It’s a dialogue with myself that is unknown to anyone else, but it feeds everything.