HAVANA TIMES — Author Margaret Randall has over a half century of ties with Cuba and she continues to nurture that relationship, which goes way beyond the several books she has published on the island.

Randall lived in Havana from 1969 to 1980, where she raised her four children, while immersed in the cultural world and the epic events of the time. Her account of those years was published in 2009 by Rutgers Press under the title: To Change the World: My Years in Cuba.

Havana Times began publishing the year before (2008), although at the time we only published an English edition. We asked for and received permission to run some excerpts from the book (see below), which were widely read.

On the back cover was a statement by Maria Lopez Vigil, author of Cuba: Neither Heaven Nor Hell: “To know Cuba, neither analyses nor statistics nor official declarations nor diatribes by its adversaries are enough.  One needs eyes infused with heart, passionate eyes, with which to look at the Cuban people in their daily life.  In this book, Margaret Randall looks at Cuba through such eyes.” 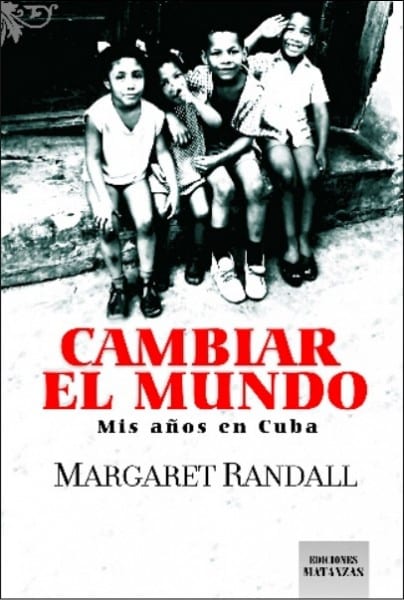 This week Randall returns to Havana to present the Spanish edition of “To Change the World: My Years in Cuba” (Cambiar el mundo: mis años en Cuba) just out from Ediciones Matanzas, translated by Havana journalist Barbara Maseda.

Her first event will be a book-signing at the Ediciones Matanzas stand at the San Carlos de la Cabaña Fortress, the main venue of the Cuba International Book Fair, on Wednesday February 15th, from 3 p.m. on.

On the following day, Feb. 16 at 2:00 p.m. Margaret will be presenting her book at the emblematic Casa de las Americas in Havana’s Vedado district.

We conducted an interview with Margaret, who turned 80 last December, and is still very active in her prolific literary production.

HAVANA TIMES: What kinds of contacts did you keep with people in Cuba after you left in 1980, and how did that evolve through the years?

MARGARET RANDALL: I said goodbye to many good friends when I left Cuba in 1980. I have kept up with most of them, either via email (despite how difficult that can be where Cuba is concerned) or because I visited often in subsequent years.

Some of the people I knew emigrated, and I was able to see them in the U.S. or elsewhere… or keep up a correspondence with them there. A dear friend and I recently reconnected in Miami after not seeing one another for 35 years.

Because I left a part of myself in Cuba, maintaining these contacts has been important to me. Whatever the political changes, whatever different or similar ideological paths we have followed, friendship for me is deep and meaningful. I like to think it surpasses ideology which, as you know, often emanates from a person’s particular experience and how that affects his or her life.

HT: Other than mail, email or phone calls, and other personal interactions, in what other ways did you stay in touch with Cuba? What media outlets did you use/prefer to get your information about Cuba? Did you follow the work of Cuban authors, artists, etc.?

MR: I continued, always, to read Cuban literature–by those living on the Island as well as by those who left. I tried to keep up with Cuban films. And of course poetry is my preferred genre.

Keeping in touch with Cuban poetry over the years was particularly useful when I decided, a couple of years ago, to put together a bilingual anthology of eight decades of Cuban poetry: ONLY THE ROAD / SOLO EL CAMINO.

That book, which has 510 pages, was published a few months back by Duke University Press. I was in Cuba in October, 2016 and presented it at Casa de las Americas. As for media outlets, I read many, among those inside the country there is Granma, Havana Times, and OnCuba, as well as what the progressive and bourgeois press has to say about Cuba in the rest of the world.

HT: In addition to the legal ordeal that you describe in the book to regain your residency in the United States, how did your links to Cuba impact your life when you came back to that country?

MR: I have always considered living in Cuba in the 1970s and being able to raise my four children there a great privilege in my life. Of course defending the Cuban Revolution was a negative in terms of my immigration case. But that’s the price one always pays for defending what one believes in. With all its flaws, the Cuban Revolution taught me that another world is possible. That’s an extraordinary gift.

HT: Have any of your views on Cuba (and the Cuban government) changed from the time you finished writing To Change the World to date?

MR: Of course my ideas change constantly. Any thinking person’s does. I still deeply love and admire the Cuban Revolution, especially the vision its first generations put forward. At the same time, as I become wiser I see history in a more nuanced way. I see problems and complexities I didn’t see before. It’s dialectical, as everything is.

HT: When did you come back for the first time to Cuba? How did that happen? How do you feel about this re-connection to Cuba?

MR: During the years of my immigration case I couldn’t travel outside the United States. I won the case in 1989, so I didn’t return to Cuba until the 1990s, when I made a number of trips bringing U.S. women down to experience a bit of the Revolution.

When I lived in Nicaragua (1980-84) I visited Cuba once, in 1983, to attend my son’s wedding, but that was a very brief trip. By the nineties, the country had changed quite a bit from ten or twelve years earlier when I’d left for good. Of course the implosion of the socialist world had taken place, and Cuba was suffering its “special period”. I noticed that many people were tired, and some were bitter.

By 2011, when I was invited to participate on the jury of the Casa de las Americas’ literary contest, things seemed better. The 2007 reckoning [Also known as the email war] around the so-called “Five Gray Years” had also happened by then, and since I am most connected with the world of artists and writers that was encouraging to me.

Since then I have returned several more times, mostly to do research for books (HAYDEE SANTAMARIA, CUBAN REVOLUTIONARY: SHE LED BY TRANSGRESSION, which appeared in 2015, and EXPORTING REVOLUTION: CUBA’S GLOBAL SOLIDARITY, which will come out in April of this year, both from Duke University Press).

Each time I noticed changes. And the renewal of relations between Cuba and the United States, that took place in December of 2014, has also made a difference. Who knows what will happen with our current administration, though nothing it promises feels good. The worldwide economic depression, opening of markets, and uptick in tourism have all had an impact on life in Cuba. So yes, each visit shows me a changed country. But I always come away with confidence that the Cuban people will find ways to deal with change in ways that will ultimately benefit them.

HT: Little has changed in the official discourse about gender and racial equality in Cuba since those years you describe in your book (i.e. everything is perfect in theory, so real problems are either superficially addressed or not addressed at all in practice). Based on what you have seen has happened in Cuba and the US in the last few decades (in terms of policies and public debates), what could both countries learn from each other to deal with these unresolved issues?

MR: It may seem on the surface that little has changed in Cuba regarding issues of gender and racial equality. Perhaps it is my age (I turned eighty in December), but I take a longer view at this point. I think a lot has changed and a lot remains to be done.

Our countries are so different in these respects. Here in the U.S. we have marriage equality and a respect for same sex couples that has yet to be instituted in Cuba. On the other hand, we don’t have universal health care or education, or many other benefits that, while not usually considered racial or gender issues, really are. And look at the United States right now: mired in a neo-fascist government with a psychopath at its helm. We have much more open debate here than in Cuba. I believe Cuba could benefit from that as well. Still, freedom of expression doesn’t always lead to justice, as we can see.

HT: There are many things about the Cuba you lived in that made it unfit as a country from which to change the world: freedom of expression and association were very limited, private initiatives and private businesses were illegal, communication and contact with people in foreign countries (both Cuban emigres and foreigners) was a sin, religious and gay people were discriminated against, social controls were very tight, and so on. What kind of positive change was possible in that context?

MR: It is true that when I lived in Cuba freedom of expression was very limited and private businesses were illegal. It is not true that contact with people in foreign countries was a sin; it was forbidden for Communist Party members but many ordinary citizens had regular contact with family members who had emigrated.

Religious and gay people were discriminated against, a terrible thing (I abhor discrimination against any group or individual), and the discourse that included terms such as “gusano” was, I believe, a serious error.

The Cuban Revolution rectified these errors in time. Most of the prohibitions were relaxed. In retrospect it’s easy to say they should have been relaxed earlier, or should never have existed in the first place. But in the political climate created by the United States’ attitude toward the Island, the blockade and so much else, it’s not hard to understand how defensive the leadership became.

My own experience in Cuba showed me that such attitudes were cyclical: when the pressure was on, the Revolution tightened its grip. When the pressure let up a bit, it relaxed it somewhat. Still, censorship always leads to self-censorship and tight social controls to personal cowardice. I understood how many of these controls came to be, but did not–and don’t now–condone them.
——-

Excerpts from To Change the World