HT: To start out, Maylu, it’s necessary to speak about a children’s program that was broadcast on Cuban television years ago.

Maylu Hernandez:  I was still studying at Cuba’s National School of Musical Entertainment (ENEM) when I was asked to audition for a children’s program that was going to be aired.  They selected me and I became a part of the program “Fantastico” for several years as a model basically, though I played some characters and sang several children’s songs.  At the beginning the director was Bebo Ruiz and later it was Tony Lechuga.  I learned a great deal working with them and from great artists like Humberto Paez.

HT: And in the world of artistic modeling, for a good while your photos appeared in fashion magazines, publicity shots…

MH:  I was also very young during that stage.  I belonged to the fashion group of the chain store “Caracol” under the direction of “Cankun,” who today is an accomplished fashion designer.

In addition to work in Cuba, I was able to work with that group at several international tourism fairs (in Spain, Italy and Venezuela).  I learned not only about the catwalk but also manners, rules of courtesy, social behavior and modeling techniques, which were taught to us by our teacher, Clarita Reimena.

Later this training as a model helped me a lot in working on stage, though I have to add that so did my luck in having the friendship and dedicated support of Abraham, who is one of the big names in Cuban design.

HT: And when did you get into dance?

MH:  When I graduated from ENEM I went directly to the Cuban Television Ballet.  That was in 1998, and I remained there for more than 10 years.

These days I’m pursuing a solo career as a singer and a musical comedian, so I had to get away from the TV Ballet somewhat.  But I’ll always feel myself a part of that institution; and its director Cristy Dominguez is and will always be “my teacher.”

HT: Along with the Cuban Television Ballet, you’ve been able to travel to important international events, including one of the most recognized circuses in the world.  Tell us about those experiences.

MH: Being part of the Television Ballet I went on many international tours, some for only a few weeks and others — like with the Tihany Circus — for a year and a half.  That circus is among the ten best circuses in the world and until that moment I had never worked in anything as modern and impressive.

I’m fascinated by circus art, and I recall that stage as one that contributed most to my development in terms of the discipline and professional rigor that was demanded at every moment.

HT:  When did you decide to seriously prepare yourself as a singer, and who contributed to that?

MH:  When I was on the “Fantastico” program, where I could always dance and sing children’s songs, I became interested in more serious singing.  When I finished the School of Musical Entertainment, I took a course in musical comedy that had excellent teachers, among them Gladys Puig – from whom I begin to take singing classes.  Later I continued my studies with the soprano Maria Eugenia Barrios, and after that with Martha Cardona, with whom I’m presently studying.  I’m very grateful to all of them for everything they’ve taught me.

HT: Undoubtedly musicals have been your greatest interest.  We saw you in The Phantom of the Opera, The Merry Widow and other shows like those.

MH:  A few months before graduating I had the opportunity to work in a musical for the first time.  It was under the direction of Alfonso Menendez and was called “The Best of Spanish Musicals.”  It had a superb cast: Rose Fornes, Maria Eugenia Barrios and Adolfo Casas, among others.

Later, and also under the direction of Alfonso, I had the opportunity to play a leading role in The Phantom of the Opera, a premiere in Cuba that played for two straight seasons.  I also performed in The Merry Widow, Yo mismo te doy la A and many musical shows.  I’ve appeared in shows such as these for the past 10 years.  A great part of what I know about that genre I love I’ve learned with Alfonso.

HT: Tell us about Chicago, in which you performed along with the Mefisto Theater Group that Tony Diaz directs.

MH:  I insist in saying that the “musical” is my favorite genre.  If to this it is added that Chicago is a work of great genius and musical excellence, it can be said that for me it was also mixed with a lot of work, because I had to study a lot, especially about acting, though I did that with tremendous pleasure.  Mefisto Theater welcomed me as if I always belonged with them.

I never felt set apart, and now I have excellent friends who are in that group.  Tony Diaz and the rest of the directing team have all my admiration and respect.

HT: We know that you’re preparing to premiere a story that was motivated by the movie La Bella del Alhambra, “Canción de Rachel” – also by the Mefisto Theater.  Will you be in the cast?

MH:  Of course.  In fact we’re now rehearsing daily in physical preparations, studying the script, going over the musical’s songs and all the rest.

HT: And at the club “El Gato Tuerto?  You’re part of the catalogue of figures there who liven up Havana nights, but does your performance break the theme of the customary selections there? 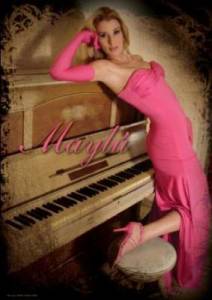 MH:  I’ve been at El Gato Tuerto for more than a year and it has been a great experience for me to work in a setting where the big figures of Cuban song have passed through.  It was Julio Acanda — who’s a journalist and a well-known television host, and who’s also the artistic director of that emblematic place — who also conceived of a type of concert for the club; this included Cuban and international cancionistica songs, which is also a lyrical genre and comes from musicals.  This has been well received by the public that comes there.

During the hour that my performance lasts every Saturday night, I sing songs that include those from Bola de Nieve, the Beatles, Abba, La Bella del Alhambra, Chicago and The Phantom of the Opera.  I’m accompanied on piano by Julio Cesar Rios and I’m pleased to share some of the songs with the tenor Bernardo Lichilin, who is a special guest there.

HT:  Do you have a great dream that you hope to realize in the future?

MH:  Above everything else, my dream is to stay healthy and to continue preparing myself for an upward moving career.  In terms of my personal life, I hope that life lets me enjoy all the people I love: my family, my friends and the public who I owe so much.

2 thoughts on “Maylu Hernandez: A Lover of Musicals”