Dilon Zeledón, was tortured and expelled from the university.  Today he is out of jail and speaking out, blaming the student’s union, UNEN, for the hell he lived through.

HAVANA TIMES – Only someone who has been in jail can fully understand how the body changes when one hears the sound of keys.  How, by instinct, the body starts shaking when it realizes that with the sound of approaching feet, and then with the sound of the door opening, that you are about to be beaten up again.  These are sounds that are not easily forgotten, even when you are kilometers away from the prison cells of El Chipote and La Modelo.

This is the testimony of Dilon Zeledón Ramos, 21, who was locked up for ten months because he took part in the civic protests against the government of Daniel Ortega.  And also because he resigned from his job as position of undersecretary of culture of UNEN (the pro-Ortega student organization) in Matagalpa.  He paid dearly for these two actions: he lost his university studies and the absolute loss of hearing in the right ear.

“I was 17 days in El Chipote [the infamous interrogation prison]. Before the 18th of April I had been bind to the truth, totally blind”, he says with absolute conviction.

On May 20, 2019, Dilon got out of jail although he had been condemned to 25 years and six months in prison, charged with terrorism,  blocking the public way, kidnapping and robbery with intimidation.

Until April 2018, the life of Dilon Zeledón was centered on the FSLN.  Because he was an outstanding dancer, he was given a job in UNEN itself.  For his work he was given travel money and food.  Several times he did the choreography for FSLN events put on by the seemingly eternal mayor of Matagalpa, Sadrach Zeledón.  He also danced in the official FSLN events related to the July 19th  Sandinista Revolution anniversary celebrations.

At first he was not aware of the mismanagement of the Ortega government, nor was he aware that UNEN was just one of the FSLN Party tentacles, within the universities.  That was why, when he told Julio Castellon, president of UNEN in Matagalpa, that he was going to resign, Julio and those in UNEN who he had thought were his friends, took his resignation as nothing less than treason.

“I remember when the first march was about to take place, on the university campus.  Julio said to me,” If you go out and join the sit-in, forget about your friends, because you know that in UNEN we are a family.”

I asked the other young people, “Are you going to stop being my friend because of this?” And they said, “No, no way”.

“You don’t know what you’re getting mixed up in”, insisted Castellon.

I said, “I think it’s time to speak out because if we all keep quiet about what’s going on, they’ll end up killing us.  And I remembered one of the laws of the student movement: our priority is the wellbeing of the students.  So it was time we hit the streets, we as UNEN; we are the only student organization that isn’t out there.

“You don’t know anything, but if that’s what you want, just go,” said Julio.

I was wearing my UNEN tee shirt, and I took it off and gave it to him.  I left, and joined the sit-in.

From that time on Dilon Zeledón had nothing to do with UNEN. However, the one who most felt his leaving was the general secretary, Luis Andino.  “We had been very close, said Dilon, “we would eat together off the same plate during the UNEN celebrations.”

“Luis was one of the first to attack me, and he said, ‘After all UNEN has done for you! When it fed you when you didn’t have anything to eat!  And now you’ve gone over to those people who don’t understand anything.  Look, Dilon, this is going to turn out badly for you, I’m telling you this like a brother, you should stick with us because things are going to get ugly and you could end up in trouble.”

The horrors suffered by Dilon in prison 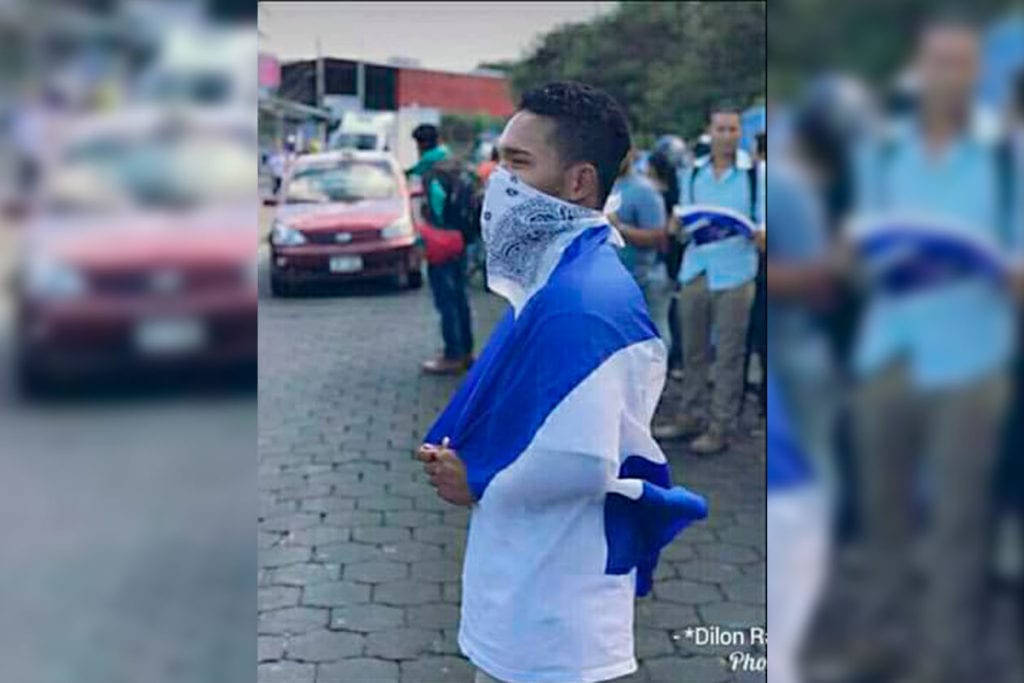 Exactly three months after resigning from UNEN, Dilon was arrested by paramilitaries.  He was first taken to city hall in Matagalpa, and then to the Matagalpa jail, where he was thoroughly  beaten up. Then he was taken to the El Chipote prison in Managua, but on the way there he was hit with the butt of an AK rifle, on the left side of his head.  The blow caused his ear to become infected.

“Those 17 days I was in El Chipote were the worst of the whole time I was in jail”, said Dilon.

He was tortured both psychologically and physically so that he would tell the authorities who was paying him to protest against the government.

“They started using a taser on me, electric shocks, and i think it was three times that they did it, in the neck, in the ribs and once in the testicles.  They kicked me, the handcuffs were very tight, my hands even became purple from the lack of circulation.  They left me standing for three or four hours, with my legs wide apart.  But the psychological part was the worst: because they start to tell you they are going to kill your family, that they will be arrested if you don’t confess.  They would say, ‘Your mother is free now, but we are going to lock her up and we are going to beat her the way we are beating you.  Is that what you want?’”

On August 8, Dilon was moved to La Modelo prison.  “When I got there I started having terrible pains in my right ear. Then it started bleeding, then the dried blood got blocked up and couldn’t come out so it got stuck inside my ear.  Then I started having high fevers and I lost my sense of balance.  I gradually lost all hearing in that ear, and then I started having convulsions”, said Dilon.

“Right now I’m going through two months of therapy to see if I can at least get back the stability in my body.  When you get a blow in the ear, you lose your balance.  Someone told my mother that in the United States they can do something about the hearing, but really, we haven’t the money to go there.”

The worst part about his captivity was actually the psychological trauma from the experience. “I was not used to being shut in.  I am an energetic person, I like to be on the move, so being enclosed within four walls was one of the hardest parts. Whenever I hear the jangle of keys I am transported back to what happened to me in jail. I have to sleep with the light on, and with the door open. Otherwise, when I close my eyes, I am afraid I will be right back in El Chipote.”

Up to now Dilon has not been able to find release through crying over all of his experience in hell, and he thinks he will probably won’t get beyond it until the situation in the country improves.

When Dilon was arrested he was only 20, he was a fourth-year student of accounting and finance at the UNAN University in Matagalpa, and he was already looking for a job in his field.  Since being released, he has discovered that he has been expelled from the University, and that all trace of his ever having studied there was removed from the files.