HAVANA TIMES, May 9 — Sewing machine needles, home ornaments, handkerchiefs, clothes, digital clocks, batteries, music CDs and much more.  All of this is hawked by street vendors along Carlos III Street in Havana.

It’s common to also find booksellers, and one always feels compelled to take a look because — among the detective novels, love stories, spy thrillers, old magazines and political texts — it’s always possibility to find something interesting, like a biography on Gandhi, Martin Luther King, or John F.  Kennedy, or features of people like Sir Anthony Van Dyck or Auguste Renoir in the collection Masters of World of Painting.

These are some of the titles that a man named Omar sells, and at his stand I was astonished to see so many interesting books in one place.  In fact, he laughed at my astonishment: 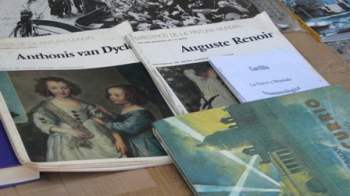 “The problem is that I wasted a lot of my life,” he told me.   “First I wasted five years to graduate in humanities and later I wasted another five years getting a degree in physical education.   In any case, I spent more than twenty years teaching.   I always wanted to teach, and since I was an athlete, I also got a license in sports so I could be a trainer.

HT: What sport did you participate in?

Basketball, though the fact is that I practiced everything…baseball, boxing, soccer, but my favorite was basketball.

HT: Weren’t you a little short for basketball?

I was on defense, so it wasn’t necessary to be so tall.

HT: But with your height, were you ever able to make it onto any Cuban team?

I was what we call here in Cuba a “high-performance athlete.”  I participated in the “Mundial Escolar” in Ponce, Puerto Rico, in 1976; in “El Universitario” in Bartisimento, Venezuela, in ‘86; and I played on Category One teams nationally and in the provinces here in the country.  In 2004 and 2006 I participated in games of veteran players against Puerto Rico and the Dominican Republic. 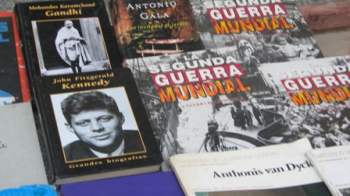 HT: What year did you retire as a trainer?

I haven’t retired yet.  I’m not old enough yet – I’m only 47.  I trained young talents at the Sports City complex here, but I got tired. I left there in the 2000 and I began selling books.

HT: How is it that you got tired?  Wasn’t that what you loved?

Yeah…and so what?  What do I have?  It was a lot of sacrifice and a lot of studying but all for nothing.  This country kills your dreams, it finishes you off, they squeeze you and in the end you don’t have anything.

HT: Do you earn more money selling books in the street than working as a trainer?

HT:  Come on, really, do you find things all that bad?  Don’t you see anything positive in the country?

Well, yes, my studies, free education, free health care and all those things everybody knows about.  But those aren’t everything in life.

HT: What bothers you?

The extremism in this country… But also, there’s tremendous racism here.  What happens is that it’s behind-the-scenes racism.  It’s necessary to be educated to realize this… and there are other things that I believe aren’t right, but I prefer to keep those to myself. 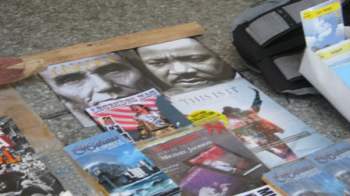 HT: Have you suffered racism concretely?

Everyone of color has suffered racism concretely, in the flesh and blood.  You’re out on the street you might see four white people pass by a police officer and nothing happens.  But if you’re black they’ll ask for your ID card like it’s nothing.  For blacks everything is more difficult difficult.  They have to make twice the effort or be twice as good.  If they’re able to get an important position, everybody focuses in on them, watching for them to make a mistake and they’ll screw them over as soon as they do… Look at the elite of this country, everybody’s white.

HT: But now there are numbers of black people on the Central Committee of the party and in the Politburo

What numbers?  The fact is that there should be more.  Most of the population of this country is black and mestizo.  Plus, this is a question of timing since everybody is tripping over each other trying to make it seem like putting black people on the Central Committee and the Politburo will make people believe that there’s no racism here.  In any case, I think that such things shouldn’t be determined by skin color.  It should be about the person who has the ability, who has capacity, period.

HT: How do you get the books you sell?

I buy them from people, though there are some that are mine.  But here I don’t have that many books.  You haven’t seen anything.  Look over there, in front.   Do you see those bundles?  Over there are many more books.  These here are only a sample of what I have.  In a while I’m going to put out all the ones I have.   Stop by a little later and you’ll really see some books.

HT: Have you read all those books?

HT: Who whetted your interest in reading?

My mother.  She wasn’t a woman with a high level of education.  She didn’t go to the university or anything like that, but she loved to read and she instilled that in me since the time I was a child.  I’ve always liked to read. 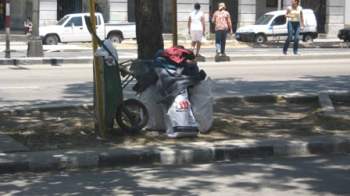 HT: Do you only sell these types of books?  These are interesting, but most people look for magazines, novels…

These are the books that interest me and the ones that I like to sell, but good books are expensive and they’re sometimes not easy to sell.  People cannot spend eight or ten CUCs on a book every day.  Do you understand?  And I also have to eat, so I try to bring in lighter things, novels like you said, and magazines…  Look, here’s a universal remote control that works for any piece of equipment.  I sell things like that because I have to eat.

HT: (Before I said goodbye to him, Omar had a surprise in reserve for me)

I always see you at the Cinemateca and at the Infanta Multicine, and at the La Rampa Theater.

I love it.  I am a fanatic of the seventh art. I don’t miss any film series at the Cinemateca.

And I forgot to tell you, I also studied percussion. I graduated in the basic level from the Alejandro Garcia Caturla Conservatory in Marianao, and I draw.  I know how to do loads of things.

Finally, I said goodbye and wished him luck.   There I left Omar with his cigar, calm, waiting for someone to come up to his books and ask about a price.