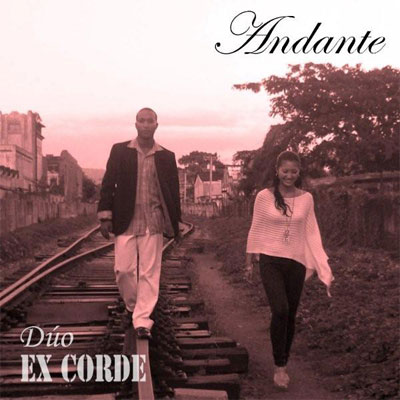 HAVANA TIMES – The Cuban-Japanese duo ExCorde is formed by Yacel Sagarra and Aya Hashimoto. “Promoting our work has become a challenge, between the fierce consumerism of reggaeton and the lack of backing from an officially recognized promotion company.”

HT: How would you define ExCorde musically?

Yacel Sagarra: Our work follows the path of folk/singer-songwriter music. To give a few examples, we do boleros, ballads and trova. We are also inspired by other sources and add variations and styles like jazz, son, as well as other elements from the musical environment that surrounds us.

HT: What about your training?

YS: I’ve always felt very attracted to art. My family environment was filled with music and a very Cuban sense of humor. I remember tagging along with my dad when he went to see about plumbing jobs, and on the way we would sing songs from his time.

I experimented with several artistic disciplines, but music was stronger and I fell in love with it. When I was 14, I started studying at the School for Art Instructors and successfully graduated with a degree in that field. Although the school taught me how to reason, first hand experience and practicing on stage taught me to sing.

HT: And how did Aya come from Japan to Ex Corde?

Aya Hashimoto: I sang in a few salsa bands and also other latino music bands in Japan, but I didn’t know what I was singing because I didn’t understand Spanish. Because of this, I decided to come to Cuba in 2011 to learn the language and study Cuban music. I also had a personal interest in learning more about Afro-Cuban culture.

Once I arrived in Cuba, I signed up to take a Spanish class for foreigners at the University of Havana, and after two months I went to visit Santiago de Cuba for its fame as the birthplace of Cuban son and trova music. It was there that I met Yacel, who would be my folk song professor. The chemistry between us was incredible, so we took advantage of that asset to initiate this project.

HT: Many artists in Cuba undertake their own record production independently. Tell us about your album “Voy atrás de ti”.

AH: We know the Cuban music business lacks viable means to incorporate artists and their projects, in addition to other needs that we don’t need to mention.

Despite this, we’ve overcome the adversities and continued making progress. Along the way, we decided to produce an album independently, featuring mostly songs I’ve written. To do this, we called on several musicians to create a broader and more diverse musical environment. That’s how “Voy atrás de ti” was created.

HT: Leaving Japan behind, it would be interesting if you commented on your experiences with what you’ve been able to see of Cuban reality.

AH: It’s the first time I’ve been confronted with an administrated cultural system, which complicates things a lot more when you want to do good work. For example, to purchase the necessary materials to sustain projects like ours, we need an official music company, and for that to be possible I have to be Cuban, and Yacel has unsuccessfully been trying to get accepted by a company for 10 years.

But it never stops being interesting, even stimulating because promoting our work has become a challenge between the fierce consumerism of reggateón and the lack of a promoting company. It’s also hard or impossible to gain access to Cuban Television.

On the other hand, the Cuban audience is very sincere and wonderful. It’s the best gift an artist can receive, regardless of where they come from in the world.

HT: What about the name Ex Corde?

AH: Ex Corde is a Latin term that means “from the heart”.

HT: Does performing barefoot have a special meaning?

YS: Our musical project aspires to be as human as possible. We believe that feelings, energy and the human spirit are closely linked to Mother Nature, and that we’re all a part of that. Being barefoot makes us feel closer to natural energy. We take that positive energy and play our music.

HT: Where on the island can we see you perform live?

YS: We are part of the monthy peña at the Parque Aguirre community center. It’s located on San José Street between Mazón and Ronda streets, in the Plaza municipality, behind the University of Havana stadium. You can find us there every second Saturday of the month at 3pm. Aesthetically speaking, it’s not very touristy, but it’s a great space.

We also put on a show called “Night by candlelight with Ex Corde” at the Café Teatro Lázaro Peña on every fourth Friday of the month at 8pm. This establishment is nestled between Marques Gonzáles Street and Oquendo Street in the Centro Habana municipality.

HT: What are you pursuing with your musical project?

YS: Personally, I’d like to bring my stories, thoughts and feelings to the world’s famous venues through song and with music that comes from the heart. Aya has decided to accompany me in this pursuit.

HT: Aya, are you going to return to Japan or continue singing with Ex Corde in Cuba?

One thought on “The ExCorde duo: Aya Hashimoto and Yacel Sagarra”