Interview with Norwegian guitarist Christina Sandsengen during her visit to Cuba 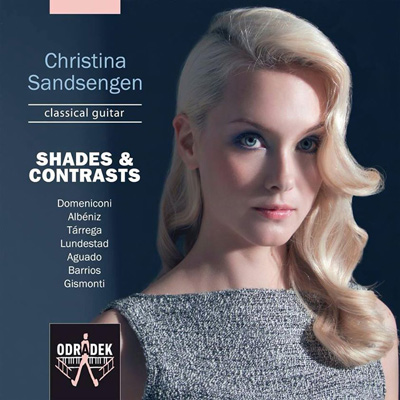 HAVANA TIMES — Christina Sandsengen is a 27-year-old Norwegian guitarist, with an impressive resume in classical guitar, an instrument she was introduced to at the age of 15. She studied at the Norwegian Academy of Music and at the Manuel Castillo Conservatorio Superior de Música, in Spain, and has performed in countries of Europe, Asia and America. Christina was recently elected a member of the Classical Guitar Association of Norway and she is founder and director of the “Oslo Guitarkole”, Norway’s leading school for classical guitar. Next month she plans to release her debut CD “Shades and Contrasts.”

This young woman recently travelled to Havana, as a tourist. Not even the owners of the private house where she was staying knew she is an outstanding classical guitarist. Her Barbie-looking photo on the cover of the CD had made me see her as a sophisticated, almost cold, woman quite different from the sensitive, thoughtful person I had the chance to interview.

HT: I know it is common for European families to provide their children with a musical education, even if they won’t be musicians in the future. When did you know you would dedicate your life to music? Was it before or after being introduced to the guitar?

Christina: Since I was five, I wanted be an artist, to do something with music, but I didn’t play anything then. I began to learn piano at 7, but I only decided to be a musician at fifteen, when I was introduced to the classical guitar. Then I knew that was what I want to do with my life.

HT: You have expressed you fell in love with the classical guitar. How did it happen?

Christina: My teacher gave me some classical guitar pieces and when I started to play them I felt that something released inside of me. Some negative feelings: fear, sadness, just melted away. That was very special. I thought this is the perfect instrument for me to express my emotions. I can talk through it. Piano, for example, is very nice, but it is not so personal. You press a key and it is there. The classical guitar is like a human voice.

HT: What were the most difficult challenges you faced when learning classical guitar?

Christina: What I think is very difficult about classical guitar is the balance between the notes; you have different strings and they all sound very differently. If you have a scale with three different strings, you have to play with your right hand in different positions to make the sound the same. If you play the notes with the hand in the same position the sound will change. There is a lot to think about. It also depends on what you play. If you play baroque music or Bach, you have to study a lot to make all the voices blend into each other in the perfect way. If you just play the notes, it is not good. That is very difficult and challenging, and a lot of fun to study, but it takes much time.

HT: You have accomplished a lot in only twelve years. What sacrifices did you have to make, how was your life as a teenager?

Christina: I had to sacrifice my time with friends and family, because I had to be very disciplined. I spent many hours at school and there was not so much time to practice, so I even skipped some classes at school to get more hours of practicing. But I always passed all the subjects. When my friends went to places, I couldn’t go. I had a plan that I followed everyday. When I couldn’t, it was not a good day. But I had some fun too. I went to rock concerts with friends.

HT: You have described classical guitar as the key to your unconscious world of emotions, but you have played the bass in metal, rock and pop bands. Do you plan to continue to do so in the future?

Christina: I really hope so. Metal, hard and heavy music have always followed me through my classical guitar years. It is two different worlds but there is so much power in both, in different ways. I love contrasts: classical guitar is very sensitive, personal, quiet, and then metal is very outgoing, expressive and harsh. For me classical guitar comes first, but if I have time in the future I will play the bass with a band. It has to be a good hard metal band, not pop music or anything. 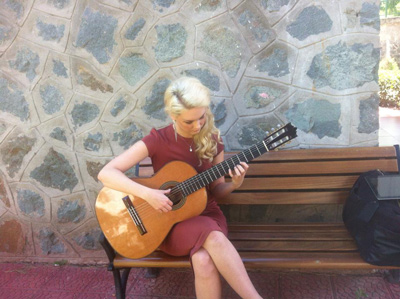 HT: It was surprising to read that you have played at funerals and centers for old people. What has it meant to such a young and successful person, still so far from old age and disease, to play at such events and places?

Christina: A lot. It is totally different experience; at concerts you just give the audience, hopefully, a good performance. But in funerals, I feel the desire to play better, because somehow I feel my heart is connected to people who have suffered a loss. I know it is impossible to help them in that situation, but by playing I can contribute something. When I play for old people, it is very nice and they are always so happy that someone comes to play for them.

HT: You also learned flamenco dancing. Do you intend to dance in public at some point?

Christina: It was just for fun. I was living in Andalusia, Spain, and it was just natural for me to take some flamenco lessons. Every time I hear flamenco music I just want to dance, but I am not good at it at all.

HT: What composers have been more challenging for you to play up to now?

Christina: As I said earlier, Johan Sebastian Bach, even though he didn’t compose anything for guitar. He made the laud suites. The instrument is very similar to the guitar, but the pieces are very difficult to adapt. When I play Bach I always have to make some sacrifices in the score. It is very hard to study and play. From guitar composers, there is none that I think makes difficult pieces, because I think if you are a guitar composer you know how the guitar works and you look for solutions that are good for the hand.

HT: In this CD, for example, there was no piece that you considered extremely challenging to play?

Christina: Absolutely. For example, La Catedral, by Agustín Barrios, is made for guitar, but inspired in Bach. Some of the moments are very difficult to study, and the last one is good for the hand but it is very fast, so you have to practice arpeggio a lot, before you can play it. You also have to be fast with your left hand. That has been a little bit challenging. All the pieces have difficulties, but most of them are very guitaristic. 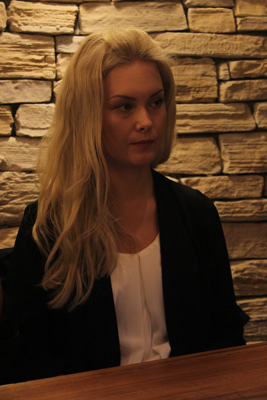 HT: I was surprised and happy when you wrote to me that you know Leo Brouwer’s music and you have played it. How has the experience been for you, what do you think about his music?

Christina: I love how he does the harmony and the rhythm. He has themes that he uses and I like that very much. I feel it suits me very well to play his music. It is very aggressive in the expression and it can also be very soft. That’s what I like about him.

HT: I haven’t heard your CD but I am eager to. Your statement makes one feel compelled to listen to it. You say that one can get to know you by hearing it. If you had to choose one piece that would make people know you just by hearing it, which one would it be?

Christina answers without hesitating: Koyunbaba, by Carlo Domeniconi, a German-Italian composer, still alive. He came to my guitar school and offered a master class and a concert. He is a very nice guy. But that is not why the piece is so special for me. I fell in love with it long before I met him. When I heard it, in a very sad time of my life, I cried and cried. Every time I heard it I cried, because the melody is very appealing and beautiful. That was combined with where I was in my life then. I didn’t dare to play Koyunbaba before, because I feared I would cry. When I finally started to play it, it felt just right, and sometimes I can cry now too, because there are a lot of emotions lying underneath that piece.

HT: Given that you are such a talented person, who has accomplished so much up to now, is composition in your future plans?

Christina: Yes, actually it is. I have the desire to compose something, but it has to be the right time. Now I just want to perform like a normal classical guitar performer and maybe I can compose in the future.

Though it was not possible for her to offer a concert during this trip, Christina Sandsengen hopes she can offer Cubans a live performance in a near future. I have finally heard “Shades and Contrasts” and I honestly feel that anything that is left to say about her is there, in the voice that speaks to us through the strings.

One thought on “The Human Voice of the Classical Guitar”