HAVANA TIMES — Mario Roman Reyes (Mario Maraca or Quija) was a member of Fiesta Campesino and used to play traditional music in Jaguey Grande, Matanzas. One day a commission from Havana came to evaluate the group and then disbanded it.

Mario: I retained my professional status, but I lost the group. I was adrift. That’s how I ended up here in Havana. Norberto Garcia Gomez, an Adventist from the Mantilla neighborhood, gave me a hand and introduced me to this wonderful person.

That wonderful person is Moraima “Mora” Fernandez Perez. Together they have made up the duo La Familia for more than a year.

Mario: I call her that because she’s like a daughter to me, though she’s too old to be that.

They are two of the many street musicians who wander around the historic district of Old Havana trying to make a living off of their music – with no bosses or fixed salaries, but also with no guarantees. After singing for tourists, mostly outdoors, and therefore running the risk of damaging their vocal cords, they might get ten dollars, five, one dollar, a small gift or nothing.

I saw them while walking down Mercaderes Street towards the Plaza Vieja. They were singing for some Mexican tourists who were eating at a table outdoors. At the end, they gave me a few minutes of their time, even though we were standing in the sun.

Mario: Our styles and voices aren’t tightly coupled; I can’t reach the full sound of her voice, but we do things together that give us a lot of life: humor, picaresque music, guarachas… We try get inside the psychology of people.

Mora: I have no musical training, but I’ve worked a lot with sextets, quintets and quartets. I’ve been singing since I was fourteen, and now I’m forty-five. I’m a songwriter and a performer.

HT: Have you always devoted yourself to music or have you had other jobs?

Mora: I used to be a janitor and I worked in a towel factory. I’ve only spent a year now devoted entirely to music… I used to sing with the group Son Caliente, performing traditional Cuban music. It was a nice stage in my life because it went very well with working in hotels for tourists. But one day the group disbanded and I ended up cleaning floors for the next seven years.

Now I’m here and I’m also working on an album with my own songs, though they’re accompanied by pre-recorded background music.”

HT: Do you have children?

Mora: I have a sixteen-year-old girl. She studied at a technical school, but she has sickle-cell anemia. Fortunately, the drug she takes is free, which gives me at least a little peace of mind. It’s true that there are problems here, but that’s a good thing. 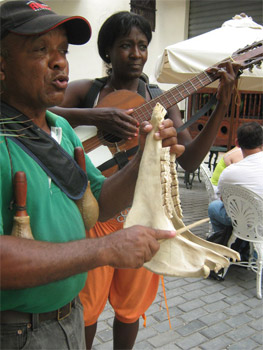 Mario: I have two sons. One is about to graduate as a doctor, while the youngest will be going into his military service after having already graduated as a skilled worker from a technical school. I’m an English teacher by training, musician by nature. I started as a cultural animator, but someone noticed that I could sing certain things. So I started improvising about the countries and cultures of tourists who visit us. I would do it in Spanish, English and French, mainly. I did it based on Cuban music.

Now I use this instrument. It’s called a “Quija,” and it’s used a lot in the Cuban countryside. I play it differently from how it’s done here. People hit it, but I play its teeth. I haven’t seen anyone play it like that, though I’ve been told that it’s done that way in other parts of the world.

I established myself here playing it in Old Havana with an amazing level of acceptance. It gets everyone’s attention, even the children’s. People want to touch it, take pictures of it, ask about its origin, and find out what animal it comes from.

It’s a horse’s jaw and I got it in the country. I’m from the Contramaestre area, in Santiago de Cuba Province. I lived in Matanzas since 1974 and most recently here. Now I go around the streets with Mora, confronting the obstacles that arise.

Mario: Sometimes they call the police on us, or the inspectors. We’ve been made to pay fines for playing music in the street.

HT: You don’t have a license?

Mario: I have a license as a party entertainer, a magician and a clown, but I don’t do any of that. I use those as forms of escape, while we do this to make a living, and we’re more or less succeeding, but with a lot of pressure.

Mora: We manage to get by on this, but without any ambitions.

HT: Do you two come out here every day?

Mora: Yes, except when something special occurs, like Mario having to go see his family.

Mario: Or if people tell us that the inspectors are around. However, important people in the ministry of culture and government officials have accepted us. That means that we have the acceptance of the people as well as those who lead; the problem is that we’re in the street.

HT: Don’t you have possibility of getting a place where you can play?

Mora:  There are possibilities, but everyone asks for an official evaluation and I don’t have one. I’ve worked with a lot of bands that have accepted me without an evaluation. But the problem would be when it came time for a trip or something, I couldn’t go. They had to find some girl with an evaluation.

HT: Is it possible for you to get an evaluation now?

Mora: I was told that assessments aren’t being done right now because they’re waiting on a new law to come out.

I’m also a composer of children’s music, which is what I prefer. I’ve been lucky that some of my songs have been performed on some children’s programs.

I had a children’s choir and I struggled to make that a success. We went to see all those officials who had anything to do with that. When they heard the music they recognized the quality of the work and gave us the chance to present the choir on television.

Now I’m hoping to save a little more money to finish two discs: one with adult music (ballads, boleros and guarachas), and another on with children’s music. I’m thinking of having them played on the radio to promote them and to see if that helps to get an evaluation so we could start playing in one set place, because the street is rough. You can make a living out here, but you have to work like a slave. 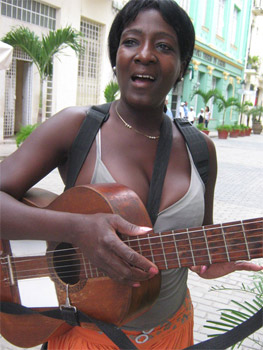 Moraima lives alone with her daughter. Thanks to this job, she has been able to add on a kitchen and a bathroom to the place where they live so that it can be declared habitable and she can get title to the property.

HT: Did those Mexicans who you were playing for give you anything?

Mario: Yes, we always manage to get something. We have our strategy, our hooks for attracting people. These are things you acquire by playing in the street. It’s like saying goes: every predator selects their victim.

At this time Mario interrupted the interview because a tour guide greeted him.

Mora: The guides know us because of Fiesta Campesino. The place and the group were called that too, and they were very well known.

Mario: I’m also a comedian, evaluated by the Center for the Promotion of Humor. I also have recorded songs that have been copyrighted. In 2005, I won the popularity award at the French Song Contest with the song “L’Humanité a besoin d’amour” (Humanity needs love), which was composed and sung by me in French.

They then said goodbye to me and started walking away. They were heading to Plaza Vieja. It was around 4:30 p.m. and they still had work to do.